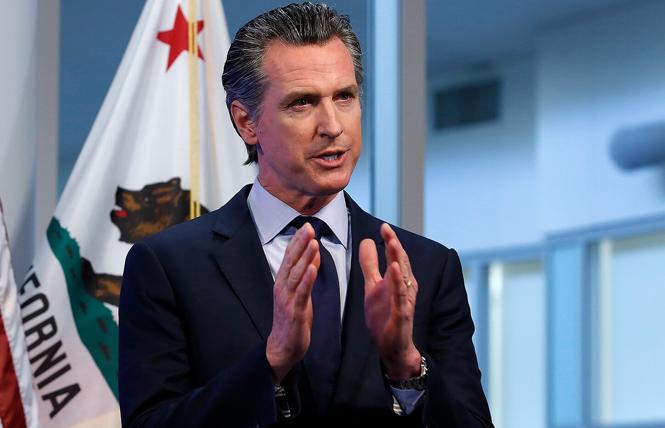 Governor Gavin Newsom needs to tell voters why they should keep him in office. Photo: AP

A couple of weeks ago we editorialized against removing Governor Gavin Newsom from office. But now that Californians are casting their ballots, it seems that the voice most needed to convince Golden State residents to reject the recall is missing — that of Newsom himself. The television ads — at least in the Bay Area — don't feature his voice, and he hasn't given many interviews to encourage people to keep him in office. Meanwhile, Republican Larry Elder is leading among the 45 candidates to replace Newsom despite revelations about his misogyny, allegedly brandishing a gun at his ex-fiancée, and his problematic financial disclosures. (The Los Angeles Times reported that state officials have launched an investigation into whether Elder has failed to properly disclose his income sources.)

The recall first gained momentum over an incident that continues to anger voters: Newsom's ill-advised visit to the French Laundry last year. We previously wrote that the governor made a mistake in traveling to the fancy North Bay restaurant and dining with people not in his household while he was telling the rest of us not to do that. Although he apologized for it afterward, the outrage snowballed and accumulated other criticisms that energized more recall proponents.

Newsom needs to go on the offensive — and fast. The recall election is September 14, and he must motivate apathetic Democrats to fill out those mail-in ballots properly. He needs to take to the airwaves and explain to people why this election is more than the "Republican recall" that the reject the recall campaign ads always say. He needs to take ownership of how he's run the state during his two years in office, which, by the way, has largely been stellar. Thanks to a Democratic Legislature and Democratic governor, the state has made progress in addressing law enforcement reform, housing, and climate change. When it comes to LGBTQ issues, Newsom has been way above average. He has not shied away from signing controversial bills like gay state Senator Scott Wiener's (D-San Francisco) Senate Bill 145 that ends discriminatory treatment of LGBTQ young adults faced with registering as sex offenders. In San Francisco, we're counting on Newsom next year to sign a bill Wiener's long worked on to establish safe consumption site pilot programs here and in Oakland and Los Angeles. We won't get that if Newsom is recalled and Elder is elected with what could be as little as 14% of the vote.

This week, Democratic former state senator Gloria Romero, a longtime charter school advocate, made an ad in support of Elder. In it, she criticizes Newsom, saying he "shut public schools" during the pandemic while his kids attended private schools. Let's be clear, the policy decisions Newsom made to confront the pandemic were sound — and likely helped save lives. We're in the midst of a public health emergency, which calls for drastic action. Voters would be foolish to oust Newsom and replace him with a Republican who would do away with mask and vaccine mandates as the state is struggling to emerge from COVID and the Delta variant.

That's an argument that Newsom himself must drive home to voters. If enough Democrats vote and reject the first question on the ballot, Newsom will remain in office. He's got about 19 days to do it.