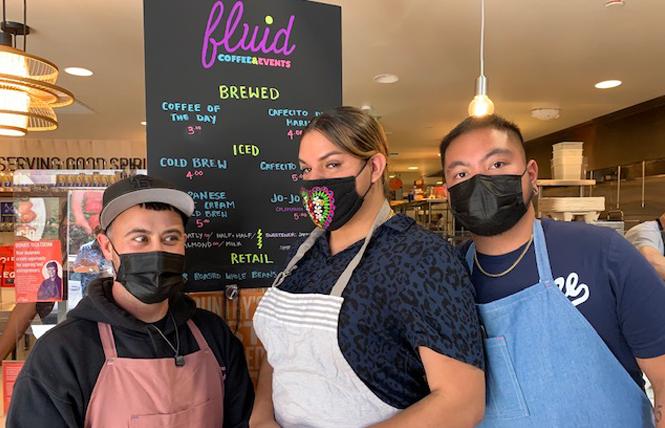 A group of four trans activists has opened a new cafe and event space catering to the trans, nonbinary, gender-nonconforming, and queer communities.

Fluid Cooperative Cafe opened August 2 in the 4-month-old La Cocina Municipal Marketplace, a food hall located in the 7,000 square foot former post office at Hyde and Leavenworth streets in the Tenderloin. It currently serves coffee and other non-alcoholic beverages. La Cocina's mission is to cultivate low-income food entrepreneurs as they formalize and grow their business.

The Fluid founders, Shannon Amitin, Santana Tapia, and JoJo Ty — all experienced in creating and producing local events — spoke to the Bay Area Reporter August 5, when the noon crowd at the food hall was bustling. A fourth person, Sarello Rose Buyco, 28, was accepted as a co-op owner August 10. He identifies as a queer trans man and is "coffee daddy" of Fluid.

"I'm beyond ecstatic to bring my Brown queer trans pride to Fluid so that I can help create and embody the safe loving home I never had," Buyco stated.

Amitin, 40, has long worked in the restaurant industry. Their resume includes more than a dozen local ventures, including Jolene's, a queer bar in the Mission, and Farm: Table, a cafe in the Tendernob between Nob Hill and the Tenderloin.

"I'm the trans-pa," Amitin quipped, referring to how they are older than the other co-op owners.

As the B.A.R. previously reported, there were issues at Jolene's last summer, including anonymous allegations of employee mistreatment, manipulation, racism, and cover-ups of alleged sexual assaults. The paper reported at the time that Amitin, and another co-owner, Ashleigh Wilson, had left day-to-day operations of the bar. Amitin said they had issues with co-owner Jolene Linsangan about what it meant to have a queer space.

This week, Amitin, who retains a partial ownership stake in Jolene's, declined to answer questions about lessons learned from that experience and applying them to the new venture.

"I agreed to talk to the B.A.R. about Fluid, not Jolene's," Amitin wrote in an email. "To discuss another project takes the focus away from the trans youth of color who are putting everything they have into making this cooperative work."

Amitin told the B.A.R. that the focus of Fluid is "to help trans youth gain economic independence and build trans entrepreneurship." They pointed out that the co-op also supports other LGBTQ-owned businesses, including queer-owned coffee roasters Equator Coffees, Queer Wave, and Marquina.

Fluid will remain in its current location for three to six months while the owners search for their own brick and mortar space in the neighborhood.

"What I want people to understand about Fluid is that it's not just a place to get coffee," they wrote in an email. "It is that, but it's also a way to show concrete support for San Francisco's trans community — especially young, trans entrepreneurs of color in the Tenderloin. We hear people proclaim their love for trans people all the time.

"To you, I say, 'Great! Come by, buy some queer-roasted beans, donate to our GiveButter fundraising campaign. Even if you just offer a few words of encouragement, make it count," Amitin added.

Amitin's co-owners are bubbling with enthusiasm about the new venture. The three met while planning the 2018 San Francisco Trans March but have also had experience in cafes and nightlife.

Ty, 22, attended City College of San Francisco, where they obtained certification as a community health worker. Ty has been involved with the queer youth group Lavender Youth Recreation and Information Center, or LYRIC, coordinating support groups for young people, and has served as a San Francisco youth commissioner.

While La Cocina isn't formally a queer space, "we hope with our partnership to connect with other communities we share the space with," Ty said.

Ty said education is an important part of Fluid's mission. "We don't want people accidentally misgendering our customers with 'Hello, sir,' for example. We've all experienced that sort of thing."

"The Friday before we opened, La Cocina invited us to do a Gender 101 workshop with everyone at the marketplace," Ty wrote in an email. "We talked about pronouns and using gender-neutral language when referring to people who come into the space. We understand it won't be perfect all the time, but with the good intentions and practice will help create the space more welcoming to all."

Tapia, 24, is a well-known drag performer who has worked in catering and events. She is aiming to launch an open mic program at Fluid as well as other types of entertainment, such as an "affordable and accessible" drag brunch.

"Trans people need somewhere to go that is not a bar," she said.

Later in the afternoon, San Francisco Supervisor Matt Haney, a straight ally who represents the neighborhood, stopped in to chat with Fluid's owners.

Haney is supportive of the new venture.

"The Tenderloin has long been home to trans, gender-nonconforming, and nonbinary residents and businesses, and Fluid will proudly carry on that legacy," he wrote in an email. "La Cocina is already a destination eatery in the heart of the Tenderloin with amazing food and now, thanks to Fluid, we also have amazing coffee."

Samuel Harrison, 50, a gay man who works in technology, also visited the pop-up. Harrison told the B.A.R. that for years he has been supporting La Cocina and was "impressed to finally see" its long-planned food hall open. Harrison discovered Fluid when he saw a friend at its counter.

"This is a fantastic addition" to the food hall, he said. "I look forward to supporting them as well."

Other supporters chimed in with support.

Honey Mahogany, a queer nonbinary trans person who's a legislative aide to Haney and chair of the San Francisco Democratic Party, wrote: "It's exciting seeing trans folks reclaim space in the Tenderloin and its been wonderful getting to see this project unfold. When the Trans District was founded one of its goals was to create support, and inspire endeavors like this one. I'm so glad that Shannon, Santana, and JoJo have taken the leap to start this business and I am looking to seeing their hard work pay off as it develops and grows."

The Transgender District, which Mahogany helped launch, is one of three cultural districts in the city that aim to preserve and promote the LGBTQ community.

Clair Farley, a trans woman who is executive director of the city's Office of Transgender Initiatives and an adviser to Mayor London Breed, added her support.

"We're so happy for the Fluid team and the recent launch of their new café and event space, and look forward to it becoming a thriving gathering place for trans and allied communities," said Farley. "San Francisco has a deep history of supporting our trans community and this is another historic step forward. It is critical that we continue to create opportunities for trans folks to own and manage their own businesses as a way to fostering economic empowerment, growth and affirmation."