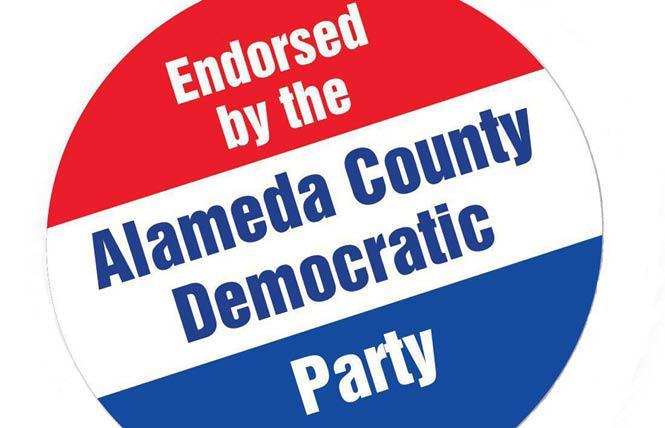 The Alameda County Democratic Central Committee is now expected to consider an amendment to its bylaws prohibiting endorsing anti-LGBTQIA+ candidates in September.

Leaders of the Democratic Party in Alameda County have decided to wait a month before taking up a bylaws change that would ban endorsement for anti-LGBTQIA+ candidates seeking elective office.

The Alameda County Democratic Central Committee, which sets policy for the local party, had been expected to take up the matter at its August 4 meeting.

But Andy Kelley, a gay man who is co-chair of the group's bylaws committee, wrote in an email to the Bay Area Reporter that he, committee co-chair Lance Kwan, and the other members had concerns with the draft proposal when they met August 3 ahead of the central committee meeting.

Specifically, Kelley said the bylaws committee wanted to tighten up some of the language in the proposed amendment to make sure the changes couldn't be misused to delay or derail legitimate endorsements in the future.

Instead, Kelley wrote that the bylaws committee reported to the full central committee that it is unanimously supportive of the amendment in principle. It plans to hold a workshop session in a couple of weeks to clean up some of the language and hear member testimony.

"The bylaws will be brought back to the full Alameda County Democratic Party meeting for adoption in September," he wrote.

Kelley stated that he and Kwan do not look at the delay as a setback, as the county central committee's rules do not allow major changes to be made from the floor, so the committee process is the appropriate method to make needed revisions.

If the amendment is approved, it is believed the local party would be the first in the state to adopt such an endorsement ban.

As the B.A.R. previously reported, the Alameda County Democratic Central Committee passed a resolution in June supportive of not backing candidates with a history of opposing LGBTQIA+ rights or who won't commit to support LGBTQIA+ rights if elected. Since then committee members have been working to make it official policy by enacting a bylaws change.

According to a copy of the proposal shared with the B.A.R. prior to the August 3 bylaws committee meeting, candidates will be deemed anti-LGBTQIA+ for voting "against a show of solidarity with the LGBTQIA+ community" or for policies "harmful or exclusionary to the LGBTQIA+ community," or if they've made public comments against LGBTQIA+ issues even if they didn't act upon those views.

Guest Opinion: Alameda County Dems have a tool against homophobia
Sign up!