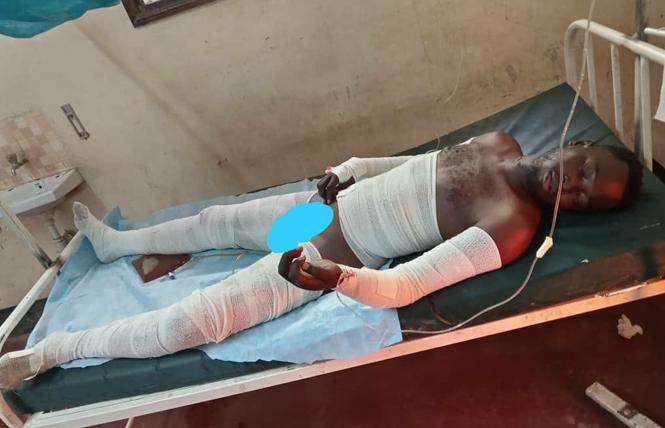 The Organization for Refuge, Asylum and Migration recently launched an in-depth research project to examine the conditions of LGBTQ asylum seekers and refugees at the Kakuma Refugee Camp in northern Kenya.

The study is in response to the April 12 death of Chriton "Trinidad" Atuhwera.

The 32-year-old LGBTQ Ugandan asylum seeker activist died due to complications caused by his burn wounds and other untreated health issues at Kenyatta National Hospital in Nairobi, Kenya's capital.

"Our teams on the ground did their very best to ensure the best medical care was provided to the victim," wrote Dana Hughes, senior regional communications officer at the United Nations High Commissioner for Refugees, in an April 15 email responding to the Bay Area Reporter's questions.

Hughes corrected Atuhwera's age, which was listed at 22 in a previous B.A.R. article and provided by queer refugee activists at the camp.

Atuhwera and fellow Ugandan gay refugee activist Jordan Ayesigye suffered severe burns from a fire-bomb attack on Block 13, where a group of LGBTQ refugees live at Kakuma, during the early hours of March 15. Ayesigye was also taken to the Nairobi hospital and was in "stable, not critical condition," as queer refugee activists told the B.A.R. He is "expected to be discharged soon," Hughes wrote, emphasizing the hospital's burn unit is considered one of the best in the region.

ORAM, the first organization to work specifically on behalf of LGBTQ refugees, has worked with Kakuma's queer asylum seekers and refugees since 2019, but not directly with residents of Block 13, said Steve Roth, ORAM's executive director, and Kakuma gay refugee activist Wavamuno Benon.

ORAM is a subsidiary of Alight, a Minneapolis-based organization that works with 3.5 million displaced people in 17 countries around the world. The organization helped launch microbusinesses making and selling soap and raising chickens to sell eggs to help LGBTQ asylum seekers and refugees sustain themselves and promote tolerance among other refugees in the camps in partnership with Upper Rift Minorities in 2019.

Roth, a gay man, recognized the stark fact that asylum seekers and refugees are living in UNHCR camps longer, sometimes for years, while waiting to be resettled in other countries. Politics, including those in the United States, are making the situation harder by increasingly closing borders and capping the number of refugees to resettle.

Closed borders leave refugees, including LGBTQ refugees, in an impoverished limbo in transit countries like Kenya, Roth told the B.A.R. The situation is now compounded by the global pandemic, he texted April 26.

"LGBTIQ refugees and asylum seekers in Kakuma have faced untold challenges in their ongoing quest to live safe and authentic lives," Roth stated in the release. "We know that the situation they face in Kakuma refugee camp is complex and multilayered.

"ORAM is committed to working with our partners including Rainbow Railroad to develop a true and complete understanding of the challenges facing LGBTIQ refugees in Kakuma, uncovering root causes, and identifying sustainable solutions," he added, clarifying to the B.A.R. that ORAM wants a "complete cross-section of people, views, and experiences."

ORAM is collaborating with Canadian- and U.S.-based Rainbow Railroad, an organization that assists LGBTIQ people flee violence and persecution, for the UNHCR-endorsed study.

The agency will provide the unidentified Kenyan-led researcher with information about the LGBTIQ refugees living in the camp in addition to conducting interviews with the camp's queer residents, community leaders at the camp, and lead stakeholders, according to the release.

The researcher's goal is to speak with "LGBTQ residents of Kakuma across all groups, categories, nationalities" and more to obtain a well-rounded understanding of the situation.

According to ORAM, approximately 300 known LGBTQ asylum seekers and refugees reside at Kakuma Refugee Camp. Most of the queer refugees living at the camp are from Uganda; others fled persecution in Burundi, Congo, Ethiopia, Rwanda, Somalia, and several other countries.

The assaults, abuses, and discrimination LGBTQ refugees face at the camp from other refugees and authorities have made headlines since 2018.

Some gay refugee activists, like Benon, escaped the camp, securing safer accommodations elsewhere in the country, usually in Nairobi, while they wait for the UNHCR to process their Kenya asylum and refugee resettlement applications.

Refugees must apply for asylum first in Kenya before applying for refugee resettlement with the UNHCR.

The Biden administration pledged to reinstate prioritizing resettling LGBTQ refugees and to increase the number of people the U.S. would agree to resettle. Last week, President Joe Biden received severe criticism when he attempted to backpedal on his pledge by retaining former President Donald Trump's refugee cap.

"We are glad that the Biden administration has agreed to reconsider" the 62,500 refugee resettlements that he promised for 2021, Roth texted to the B.A.R., adding it was "unacceptable" for the administration to backtrack.

LGBTQ refugees at Kakuma, particularly residents of Block 13, have spoken out and protested against anti-gay attacks by fellow refugees and authorities and the lack of protection at the camp since 2018. Atuhwera's death and Ayesigye's recovery are serving as catalysts as they keep fighting for protection.

UNHCR officials and LGBTQ residents of Block 13 continue to disagree regarding the realities on the ground in the camp and Ayesigye's recovery.

Benon and other LGBTQ activists in Kenya and the U.S. insisted in Facebook messages to the B.A.R. that nothing has changed at Block 13 since Atuhwera's death.

UNHCR officials have not visited the compound. Benon wrote April 20 that police raided it and attacked residents with guns and sticks while searching for gay activist Gilbert Kagarura, who spoke with Reuters after Atuhwera died.

Ayesigye remains in critical condition, he said, despite UNHCR statements reporting UNHCR doctors cared for Ayesigye during his recovery, and he is ready to be released from the hospital.

Hughes defended the agency, stating to the B.A.R. it has pursued discussions, support, and mental health assistance for LGBTQ refugees to reduce tensions and deployed additional police forces, especially in sensitive neighborhoods. Additionally, it has sent agency doctors to oversee Ayesigye's care and recovery.

In an April 15 release responding to the queer refugee's passing, Fathiaa Abdalla, UNHCR's representative in Kenya, expressed the agency's sadness over Atuhwera's death and called for Kenyan authorities to investigate.

"We urge the Kenyan authorities to accelerate their investigation into the alleged attack and hold those responsible to account," she said.

The agency has "contacted police to ask for an update on the investigation as it is crucial that those responsible are held to account," Hughes wrote to the B.A.R.

ORAM stated, "There is a clear need for further action and support, based on facts and taking into account the current situation on the ground."

ORAM added that the "lack of clear, detailed and well-rounded information regarding the situation experienced by LGBTIQ refugees in the camp also creates challenges for those interested in helping to ensure the rights and well-being of this community."

The goal of the organization's study is to identify overarching issues, pinpoint solutions and make recommendations to address systemic challenges facing the community.