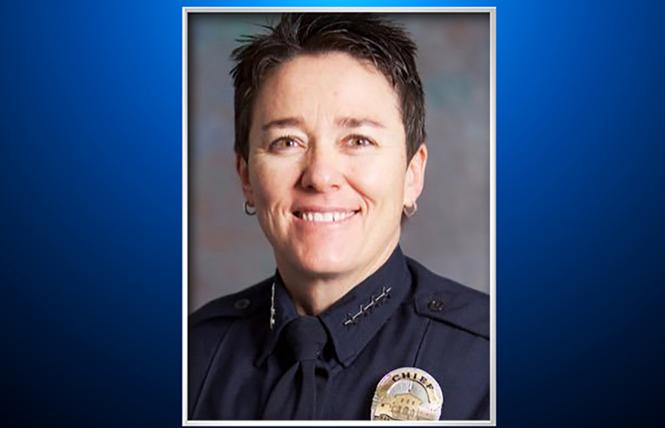 "I did not like police growing up," the Fairfield police chief told the Bay Area Reporter. "I grew up underprivileged in New Mexico, in a household with a lot of violence, so police came quite a few times and I didn't care for them. So, if you ask anyone who knew me then, nobody would have thought that'd be my path."

But Cantrell, a 50-year-old lesbian, became the first woman and the first LGBTQ person in her position last October. She said her feelings toward the police began to change after a chance encounter with a stranger at a party decades ago.

"He was a nice guy, and eventually it comes up: 'what do you do?' Cantrell said. "He said 'I'm a police officer,' and in all my 22-year-old wisdom I said, 'that's unfortunate.'"

But through their discussion, Cantrell began to reassess her views.

"He took it well," Cantrell said. "He worked in domestic violence — with people whose parents had been incarcerated — and that was my story. I was like 'I thought you just harassed people' and he laughed; he didn't take it personal, and we talked about the things that police actually do that I was not aware of."

(Both of Cantrell's parents were incarcerated.)

And so in 1994, when she was 23, Cantrell started the process of becoming a police officer in Mesa, Arizona. She eventually rose to the position of deputy chief there.

Cantrell said that, in her experience, LGBTQ acceptance has come a long way in police departments since that time.

"I think back to 1994, and even just gay rights — Ellen DeGeneres, the first lesbian I remember on TV, being canceled — that's what it was like," she recalled. "Mesa is a very conservative city with a very conservative police department, and I was an in-your-face lesbian because I was sick of it. I wore a rainbow necklace, Pride shirts, and I just wanted to be treated equally."

Cantrell said that she became the LGBTQ liaison for the department. She was also the chair of Mesa's Human Rights Forum.

"Chairing the human rights group — an LGBTQ group in Mesa — they asked the police department to march in Phoenix Pride with them. I was like 'absolutely,' and I didn't consider it not being accepted," Cantrell said. "The chief at the time — thank goodness — was supportive."

"I got rude things in my mailbox," she recalled. "I thought we'd come a long way, but we hadn't and there was a lot of hate and misunderstanding of the LGBTQ community."

When Mesa police marched in Phoenix Pride, Cantrell said, Phoenix police who were providing security for the event were "shocked" to see them, and "turned their backs."

A decade later, however, "there will always be people who have biases ... but now I don't feel like it's a thing anymore. We have come a long way."

Move to CA Central Coast
After receiving a job offer, Cantrell became the chief of police in the Central California coastal college town of San Luis Obispo in 2016. During that time, she worked with Douglas Heumann, a trans man, on LGBTQ training for officers.

"SLO is a very progressive city and really accepting," Cantrell said. "[Doug is] such a fantastic guy. He transitioned in the 1980s, and we had discussions about what we did for training for the police department about understanding the trans community."

Heumann, an attorney, was chair of Trans Central Coast.

"They gave me about 20-30 minutes and I trained people, including dispatch, on how to interact with trans people correctly and why that's important," Heumann said.

Heumann said that Cantrell reached out to the community to inform them about how policing worked, and is committed to diversity and inclusion.

"[Deanna] put in a lot of work and police time for the whole community," he said. "It was an education that allowed people to see what police are doing, and put a face on it."

In 2019, a woman identified only as "J" (because she was a victim of violence) said she was attacked by members of a group of men she believes were on a business trip from Fresno as she walked up the stairs to her room at a San Luis Obispo hotel, as the San Luis Obispo Tribune contemporaneously reported.

Heumann said there was some back and forth between the police and the San Luis Obispo County District Attorney's office about whether to charge the incident as a hate crime. Cantrell said it eventually was.

"I think there'd been a problem about some of the actions of the trans woman, but that doesn't excuse being hit, shoved on the ground, and assaulted," Heumann said about why there was initially hesitation. "My understanding is that a hate crime was charged."

Cantrell admits the police could have handled the situation better.

"The officer that went out didn't do everything that could have been done," Cantrell said. The case was charged, she said.

"Thankfully, the best part of that was we had a relationship with the LGBTQ community," Cantrell said, which helped smooth over issues that could have arisen from the incident.

But another incident during Cantrell's tenure drew headlines, too — this time calling her professional conduct into question.

While using the restroom at lunchtime at an El Pollo Loco in July 2019, Cantrell removed her gun — which had been in a holster. She did not put it back on when she left the restroom.
According to the Los Angeles Times, Cantrell said she realized her mistake within minutes but when she returned to the restroom, the gun was gone.

The gun was recovered when a man describing himself as the brother-in-law of the alleged gunpocket turned in the firearm.

Skeeter Carlos Mangan of Los Osos said he had taken the gun, according to an Associated Press wire story. No charges were filed.

A man named Cheyne Orndoff, who was misidentified as the man who took the gun, was arrested for child neglect, because of an unclean living environment and drug paraphernalia that was present in his house, according to the Cal Coast Times.

Orndoff's daughters, then 7 and 9, were placed in foster care.

Cantrell did not report the theft for the first two hours after it happened, and a "be on the lookout alert" was not issued for more than eight hours after the gun was lost. The delay in reporting led to concerns from Fairfield officials after Cantrell's hiring there was announced, the Cal Coast Times reported.

"It was terrible," Cantrell told the B.A.R. "That could have ended tragically. I am beyond careful and I don't know how to explain that. I'm super proud of the way I handled it. I was incredibly humbled, and I was transparent. While there were headlines, it was fully investigated."

"I learned that the community wants transparency," she said. "It was difficult for my community, difficult for the police department; so I had lessons there I took away, but I'm also a human being and hope I'm not forever judged on one mistake after 27 years of carrying a firearm."

Move to Fairfield
On October 14, 2020, Cantrell became Fairfield's police chief, moving to the Solano County city with her partner, Kristi.

Cantrell said that in the past six months, "we've been working on our purpose and mission, starting to get the foundation."

Cantrell said everything the department does should be connected to its mission statement.
"We exist in policing today to make people's lives better and to decrease harm in the community," she said. "At the root of what we do — ask any police officer — is helping people, helping youth, so having a purpose defined helps our vision and our values."

Over the next year, that will be implemented in every facet of the department, including "training, performance evaluation, development, [and] promotions."

Cantrell said she is supportive of non-police entities taking over some responsibility for public safety if it is in line with the police department's mission. Restorative justice programs and youth programs can play a role, she said.

Already, Cantrell has told officers she does not need a traffic ticket quota.

"I don't believe in just writing tickets," she said. "I believe the reason we should write tickets is to avoid collisions, because that's what causes harm. I don't need the statistic."

Already, Cantrell has met with Crisis Assistance Helping Out On the Streets, or CAHOOTS, in Denver, which as the B.A.R. previously reported is a program in other jurisdictions that will send medical professionals to situations where that would be better called for.

"I think that if there's any problem society can't figure out, it's gotten thrown at policing," Cantrell continued. "We need more mental health services. We need more things outside policing. It's stuff we're working on."

Jonathan Cook, a gay man who is the executive director of the Solano Pride Center, had positive things to say about Cantrell.

"She's been here just a short amount of time, but she's the first chief who has reached out to the Solano Pride Center, so I appreciate the effort she's made," Cook said.

Cantrell invited Cook to serve on the citizen police audit committee, which overviews complaints about police officers. He started in the beginning of April, and said she has made efforts also to reach out to the Black and Latino communities in Fairfield.

"Our community is so diverse, and of course, Black Americans are part of the LGBTQ community, so the national conversation we are having is something we are concerned about, and there is a historic connection with the Stonewall riots and [the] Compton's [Cafeteria Riot]," Cook said, referring to the 1966 uprising in San Francisco. "But the fact that we have an out police chief in Fairfield is a significant improvement. I hope LGBTQ people can see themselves represented at all levels of government. And I applaud the chief for introducing herself to various community leaders."

Ultimately, Cantrell said, the police and LGBTQ worlds need not be at odds.

"You can love both; they're not mutually exclusive," she said. "It may feel separate, but we're not."