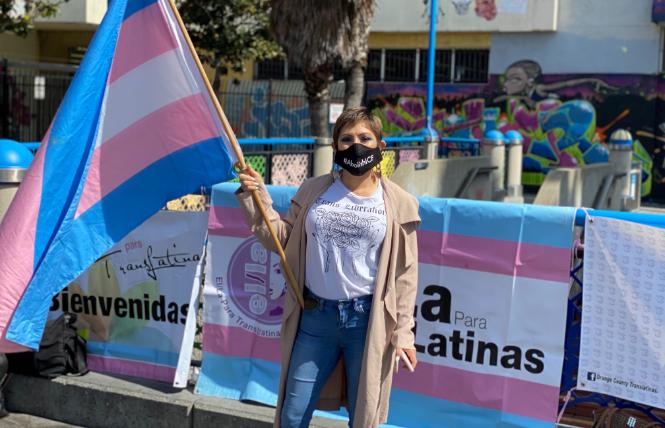 Victoria Castro holds a trans flag as she speaks at a March 19 rally in San Francisco calling for trans people in federal immigration custody to be released. Photo: John Ferrannini

About two-dozen people attended a protest at the 16th and Mission Street BART station in San Francisco March 19, calling for the release of all transgender people in United States Immigration and Customs Enforcement custody.

In an update, one trans woman was released from ICE custody March 25, advocates said. (More information is below.)

The protest comes on the heels of a letter from formerly-detained trans people seeking freedom for those still in ICE custody.

"We are fighting and trying to rescue the people in the hands of ICE, facing deportation, who are trans and especially those who are HIV-positive," Victoria Castro, a trans activist with the San Francisco-based El/La Para Trans Latinas, said in remarks translated from Spanish.

The letter documents injustices against trans people while in detention, which as the Bay Area Reporter previously reported have often included sexual abuse, harassment, and discrimination.

"President Biden's memorandum on February 2, 2021, on advancing the rights of the LGBTQ+ community worldwide, must start at home. Advancing our rights in the United States means releasing all transgender people currently in ICE's custody," the letter states, in part. "While ICE has not publicly shared how many of transgender immigrants are currently in its custody, there are too many stories of our community members facing harassment, violence, purposeful misgendering, of homophobia, and transphobia — experiences that many of us have also faced while in ICE custody. It's clear to all of us that ICE cannot keep our communities safe."

The letter also discusses three trans women who died either in or shortly after being in ICE custody during previous administrations.

"Under ICE's custody, Victoria Arellano, a transgender woman from Mexico, died in 2007, and asylum seeker Roxsana Hernandez Rodriguez, a transgender woman from Honduras, died in 2018. On June 1, 2019, on the first day of Pride Month, Johana 'Jao' Medina Leon, an asylum seeker from El Salvador, died in a hospital, right after ICE released her from custody to try to absolve itself of her death," the letter states.

"All three of them were HIV-positive and their medications were at times denied and their pleas for medical assistance were ignored. All of their deaths were preventable and ICE willfully neglected them to their deaths," the letter adds.

At the protest, activists called in particular for the release of Eva Rosas, a 42-year-old trans woman from Veracruz, Mexico who is currently in ICE custody at the Stewart Detention Center in Lumpkin, Georgia.

"She has faced sexual and physical assault" there, according to Emilio Vicente, the communications and policy director with Familia: Trans Queer Liberation Movement. "She was arrested in May 2019 for a DUI in South Carolina and although she paid her bond ICE put a hold on her, which led to her being transferred to ICE custody."

"We're glad that Eva will be released today and will be back home with her family. Her niece and sister have been incredible advocates for her liberation. It is to their efforts and the community at large that Eva is being released today," stated Jorge Gutierrez, the executive director of Familia: Trans Queer Liberation Movement. "Releasing Eva was the bare minimum that ICE could do. Eva's case is unfortunately not unique and we know that there are more trans people in detention centers right now, suffering sexual and emotional abuse under ICE custody. ICE has a long history of abuse and it's now more important than ever to call for the abolishment of ICE. President Biden and DHS Secretary Mayorkas must act to protect our communities and immediately end the detention of trans people and all undocumented immigrants."

(As of press time, Familia: Trans Queer Liberation Movement has not responded to a B.A.R. request to interview Rosas.)

Neither the Department of Homeland Security nor the White House have responded to the letter, Castro told the B.A.R.

Tania Jimenez, the program manager at El/La Para Trans Latinas, said that even if all trans people in ICE custody can't be freed, they still need to have their trans identity respected.

"If they do detain us, detain us with the respect we deserve and treat us as a woman," Jimenez said. "They're not treated like women."

The Biden administration and ICE did not respond to requests for comment as of press time.

Updated, 3/25/21: This article has been updated with news of a trans woman's release from ICE custody.