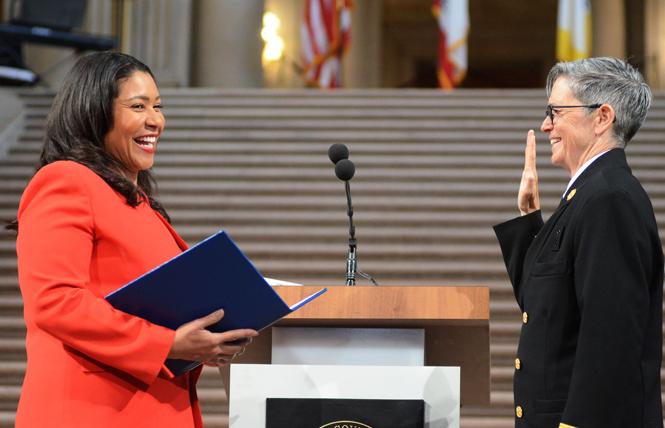 Three members of the LGBTQ community — all people of color — have accused the San Francisco Fire Department of discrimination this year. Every month since January a lawsuit or claim has been filed against the beleaguered department and together they point to a disturbing trend of allegations of a hostile work environment. That SFFD is led by an out lesbian and longtime member of the department — Chief Jeanine "Neen" Nicholson — is even further cause for alarm, though some of the alleged charges occurred before she took the helm. Nevertheless, it's obvious that there's a problem at SFFD. That's not good, either for the personnel serving as first responders or city residents.

In January, gay Black firefighter Keith Baraka filed an amended lawsuit in San Francisco Superior Court alleging discrimination against him based on his race and sexual orientation. First joining the department in 1997, Baraka said that being assigned to a station in the Duboce Triangle neighborhood near the Castro did not provide a safe haven. As we reported, the suit alleges that for years his locker was broken into, his name was erased from the assignment board, and when he entered a room all non-Black personnel would leave. He said that he's being retaliated against, as is the department's LGBTQ affinity group, SF ResQ.

In February, Ronnie Jones, a trans Black paramedic with SFFD, filed a lawsuit in San Francisco Superior Court alleging he has experienced discrimination on the basis of his race and gender identity, harassment, and retaliation. Jones, who's worked for the department since 2006, came out as transgender in 2015. Jones was then told to switch to using the men's locker room and other facilities at the station — but the other people who work there were not informed of the transition, which created confusion and discomfort, according to the complaint. Jones, who's based at the Bayview station, also faced misgendering and other attempts to demean and humiliate him, according to his attorney, Angela Alioto, who's also representing Baraka.

This month, a claim was filed against the city by lesbian Assistant Chief Nicol Juratovac, the highest ranking Asian woman in the department. A claim is a precursor to a lawsuit and Juratovac alleges SFFD perpetrated whistleblower retaliation and discrimination. As we report, Juratovac is asserting that she experienced retaliation after exposing cheating on promotion exams, safety violations, and racism in the department — as well as for blowing the whistle on what her attorney, Mark P. Fickes, of Cannata O'Toole Fickes and Olson, described as a "drunken" party at a fire station in Noe Valley in 2017.

Nicholson is apparently aware of problems in the department. Baraka and Jones' lawsuits both include a telling comment the chief made last summer that "we are not doing a good job in terms of recruiting a good amount of diverse candidates." And in Juratovac's case, Fickes, a gay man himself, repeatedly cited a "good old boys" culture at SFFD. It can be difficult for the culture to change at fire departments, long the bastion of straight white men, but the pervasive treatment these three LGBTQ employees have endured, based on their legal filings, is beyond the pale. And it speaks to the work that must be done in the SFFD to restore confidence in the department. "We forge bonds that I think that other people don't have necessarily in their jobs, you know," Nicholson told us in a 2019 interview just before she was sworn in as chief. "We deal with life or death situations and we do it as a team. And because of that, we are resilient."

It seems that the team is disunited. Employees should not have to put up with racist treatment and misgendering, or be retaliated against for exposing alleged wrongdoing, as these three workers have charged. "The city and the Fire Department take equal employment issues seriously," SFFD spokesman Lieutenant Jonathan Baxter stated, with regard to Juratovac's claim. "We are committed to fostering a welcoming, inclusive workplace free of discrimination or harassment based on race, gender, sexual orientation, or any other protected characteristic." Based on the pattern of the lawsuits and the claim, it would seem this commitment is wavering. That the three involved are people of color is also disturbing. While these cases make their way through the system, it is incumbent on the Fire Department's leadership, including the Fire Commission, to address what appears to be systemic bias. An outside investigator should be hired and the city must work swiftly to address the accusations. Firefighters and paramedics are among the heroes during the pandemic; they deserve a workplace free from bias and retaliation.