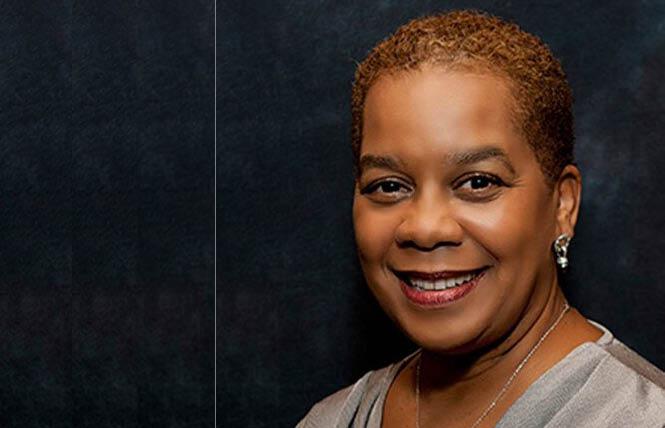 Phlunté Riddle, a member of California's juvenile parole board, will have her Senate confirmation hearing next week. Photo: Courtesy LAProgressive.com

Phlunté Riddle, a member of California's juvenile parole board, is once again facing opposition from LGBTQ leaders who question the former Pasadena police officer's ability to adjudicate cases that come before her. Her detractors have called on Governor Gavin Newsom to rescind his nomination of Riddle to the oversight body.

Riddle has been serving on the Board of Juvenile Hearings since being named to it by Newsom in October 2019. The position, for which Riddle earns $159,068 a year, requires confirmation by the state Senate.

Due to the COVID pandemic, Riddle's confirmation hearing had to be delayed. The state Senate's Rules Committee is scheduled to take it up Wednesday, March 17, and Newsom is calling on lawmakers to confirm her.

"The governor appointed Phlunté Riddle because of her relevant and extensive experience and believes she is the right person for the job, and supports her confirmation," stated Newsom's office in an emailed reply to the Bay Area Reporter March 12.

Riddle declined the B.A.R.'s interview request, saying she had been advised to refer all media questions to the governor's office. At the time of her swearing in to the parole board position, Riddle had stated, "Juvenile intervention is critical to making sure all of California's youth have the opportunities to be successful."

Lesbian state Senate President pro Tempore Toni Atkins (D-San Diego) chairs the rules committee. Her office told the B.A.R. that Atkins does not comment on appointees ahead of their hearings.

The office of gay Assemblyman Evan Low (D-Campbell) told the B.A.R. this week that the Legislative LGBTQ Caucus, which Low chairs, had not been made aware of the concerns raised about Riddle. As such, it has not discussed her nomination and was unlikely to do so ahead of her confirmation hearing.

With the hearing pending, the complaints voiced to Newsom about Riddle are becoming public. LGBTQ leaders in Southern California recently shared with the B.A.R. several letters sent to Newsom regarding Riddle's nomination.

They have recounted to the governor concerns first raised about Riddle in 2015 when she ran for a state Senate seat spanning parts of Los Angeles County, including Pasadena, Burbank, and Glendale, and San Bernardino County. Questions then focused on her ties to several anti-gay Christian universities and her stance on abortion.

Following the Black Lives Matter movement of recent years and the nationwide protests that broke out last summer against policed killings of Black Americans, Riddle's detractors have also raised concerns based on her nearly 29 years working for the Pasadena Police Department, where she was the first African American female sergeant, lieutenant, and adjutant to the chief of police. She also served as the department's spokesperson in the press and has been criticized for the role she played in publicly defending two officers who shot and killed Kendrec McDade, an unarmed 19-year-old Black college student, on March 24, 2012.

Lesbian former state lawmaker Jackie Goldberg, now a member of the Los Angeles Unified School District board, wrote to Newsom last August to express her "grave concern" about Riddle serving on the juvenile parole board, calling her appointment by the governor "ill-advised."

"The youth parole board requires leadership of irreproachable devotion to equity and inclusion, especially toward the most vulnerable youth, on which this nominee falls short," wrote Goldberg. "By having chosen to sign onto workplace policy statements that denigrate LGBTQ students and forbid their full involvement in campus life, Ms. Riddle raises doubt about whether she might treat fairly all people, including LGBTQ young people, whose complaints, applications, or cases might come before her for review."

Goldberg also referred to Riddle's time with the Pasadena police in her letter to Newsom.

"By disparaging a teenage victim of a fatal officer-involved shooting in a searing episode of racial injustice, her presence on this state panel reopens raw wounds involving police accountability," wrote Goldberg.

Earlier this month Ron Buckmire, a gay black man who is a professor at Occidental College, also wrote to Newsom expressing his "fervent opposition" to Riddle's nomination. He was one of the first people to raise concerns about Riddle's LGBTQ stances when she mounted her unsuccessful bid for the state Senate seat six years ago.

"There are other qualified African American women who can serve in this capacity who do not have the same homophobic and problematic baggage that Ms. Riddle's appointment would bring," Buckmire wrote in his March 9 letter.

Los Angeles resident Steven Fisher, a 15-year member of the Board of Governors for national LGBTQ rights organization the Human Rights Campaign, also this week urged Newsom to name another person to serve on the parole body.

"Time and time again, she put her stamp of approval on policies that falsely treated LGBTQ identity as contrary to religion, rather than the blessing and reflection of diversity it is," wrote Fisher in a message he sent to Newsom. "This nomination perpetuates stigma. It sets back our efforts to build bridges of dignity. I urge you to withdraw this and prevent further damage to progress toward respect and equality."

In an interview with the B.A.R. in 2015, Riddle noted she voted against Proposition 8, the 2008 ballot measure defining marriage in the state as between a man and a woman. She recounted how seeing the suffering an early partner of hers on the police force and his partner went through in the 1990s as he battled HIV informed her feelings on the issue.

In terms of her teaching at the Christian colleges, Riddle acknowledged she had signed employment agreements that included sections barring abortion and defining marriage as that between a man and a woman. But she also noted her class syllabus banned discrimination based on sexual orientation and that she never witnessed any student being mistreated based on their sexual orientation or beliefs about abortion.

Following her failed bid for public office, Riddle went to work for Assemblyman Chris Holden (D-Pasadena) as his senior field representative in 2016. A year later she became Holden's district office director and then, in 2018, became his external affairs consultant.

The owner of Phlunté Riddle Leadership Consultants since 2013, she left Holden's office in 2019. The legislator praised her being appointed to serve on the juvenile parole board in a statement issued the day after Riddle took her oath to serve.

"Phlunté is a proven leader who has spent her life serving the community, advocating for those in need, and bringing people together to find resolutions to problems," stated Holden. "I congratulate her on the well-deserved appointment and know she will serve in her new capacity with the same values and integrity that we all know her for."

The Senate Rules Committee hearing will begin at 1:30 p.m. Wednesday, March 17. Information for how to view it online and provide public comment can be found at https://srul.senate.ca.gov/agenda