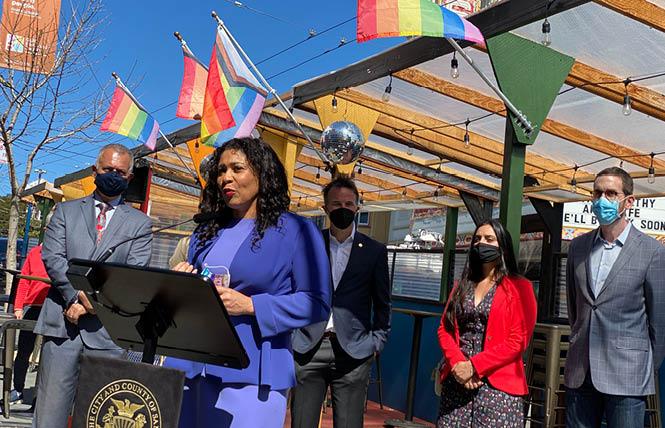 "I want to cut bureaucracy; get rid of red tape," Breed said, standing in front of a parklet used by The Cove on Castro restaurant and the bar 440 Castro. "This program — let me tell you — gives light, life, and vibrancy to San Francisco."

The plan is in the form of legislation crafted in coordination with the mayor's office that will be introduced at the Board of Supervisors meeting Tuesday, March 16, by gay District 8 Supervisor Rafael Mandelman and District 11 Supervisor Ahsha Safaí, who were present at Friday's news conference. Also on board are District 2 Supervisor Catherine Stefani and District 6 Supervisor Matt Haney.

"The mayor has spent a great amount of time here," Mandelman said. "When we see progress in this neighborhood, it is often the mayor making a phone call."

Safaí said that extending the life of the program will play a big role in ensuring the survival of the city's small businesses and ethnic and cultural communities.

"These businesses are predominantly family-run, mom and pop shops where people have put their life savings on the line," Safaí, a straight ally, said. "These businesses are what make San Francisco special. People come from all over the world to the Castro. And this would never have been able to happen if we had not had this crisis."

The Shared Spaces program began in June 2020, allowed under Breed's emergency powers. Since then some 2,100 curbside and sidewalk permits have been issued.

The program was envisioned by the city's Economic Recovery Task Force as a way to support small businesses that could not operate indoors at full capacity due to the COVID-19 pandemic. In October, after the task force recommended that elements of the program be made permanent, Breed announced a way would be found for it to continue beyond the state of emergency.

"There are parklets everywhere," Breed said, noting the newfound popularity of al fresco dining and drinking in the city.

Safaí said that "this is a program that has transformed San Francisco. You can't often say a program is transforming a city. ... Look at how many parklets are on this street."

If the legislation passes, businesses will have between six months and a year to move from having a permit under the emergency order to having a permanent permit, according to Robin Abad Ocubillo, the Shared Spaces director.

Businesses will be able to apply for a permit on a sidewalk, in a curbside lane, on a roadway, private property or as a pop-up through an application portal, a news release from Breed's office states.

"The city will require approvals from city agencies within 30 days of businesses submitting an application, which is aligned with requirements under Proposition H passed by the voters in November 2020," the release continues. "The permanent Shared Spaces program includes clearer public engagement protocols, so neighboring businesses and residents have a say in how the streets and sidewalks are used in the long-term.

"The Shared Spaces program will defer collection of permit fees until June 2022. The program will gradually start to rebalance curb uses as transportation needs increase, along with a recovering economy, by incentivizing movable parklets and promoting space sharing and turnover amongst merchants on the block," the release states. "Lastly, the city will provide coordinated enforcement for Shared Spaces to make compliance easier for businesses."

But the city doing this on its own would come with great difficulty due to state statutes (under which each venue would have to change its own license) — which is why gay state Senator Scott Wiener (D-San Francisco) has authored parallel legislation to change California's alcohol laws.

Breed credited Wiener with coming up with the idea for parklets during his time representing the Castro neighborhood on the Board of Supervisors, but in those pre-pandemic days politics led to a more cumbersome result, multiple officials said.

Wiener said the program has been a "lifeline" to businesses.

"The number of restaurants and bars that would not be here today if not for this program is significant," Wiener said. "With very little fighting, the city was able to show what's possible. Before the pandemic, it'd have been chaotic San Francisco politics as usual with people thinking about the worst possible things that would happen."

Still, Wiener warned that "it's going to be very tempting to slide back into the old ways of doing things — that streets are only for cars."

"These parklets can only survive with a little support from the state," Mandelman said.

Solange Darwish, co-owner of The Cove on Castro (and who celebrated her birthday Friday), thanked Breed for deciding to have the news conference at her business.

"This June it will be 50 years for The Cove on Castro as a family-owned business. Our community endured an epidemic that took too many, too soon, and too young," Darwish said, referring to AIDS. "Now we have been through a pandemic together. This community is strong."