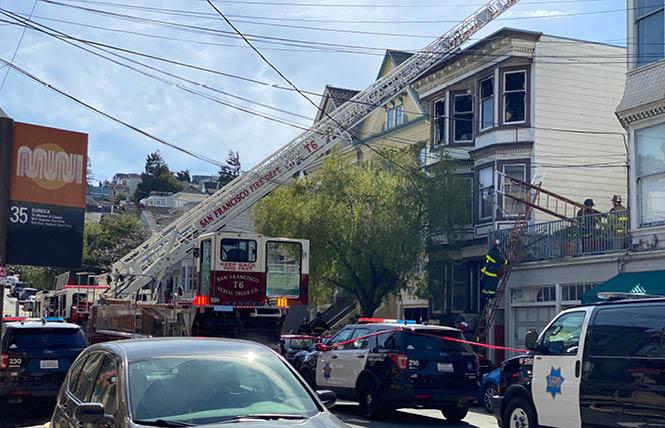 Personnel from San Francisco fire and police departments were on the scene of a fire Friday afternoon. Photo: John Ferrannini

A naked man being sought by San Francisco police after a fire was allegedly set at a residence adjacent to the intersection at 18th and Eureka streets in the Castro neighborhood Friday afternoon has been arrested, police said.

The suspect arrested by police was identified as Lucian Ruiz, 33, of San Francisco, according to Officer Robert Rueca, a public information officer with the San Francisco Police Department. Ruiz was charged with two counts of assault with a deadly weapon, two counts of resisting a police officer, delaying/obstructing an investigation, and probation violation, and arson-related charges.

No suspect had been arrested for several hours after the fire; Officer Adam Lobsinger, another SFPD public information officer, told the Bay Area Reporter shortly before Ruiz's name was released that "the suspect has been taken into custody and the scene has been rendered secure."

The San Francisco Fire Department responded to the blaze and quickly extinguished it.

Police said officers from Mission Station responded at about 11:32 a.m. to the 100 block of Eureka Street on a report of a person screaming.

"Officers arrived on scene and made contact with an adult male armed with a knife who fled from the officers. Officers established a perimeter and began conducting a search for the suspect," Lobsinger stated.

"During the search, officers noticed smoke coming from a building on the 100 block of Eureka," Lobsinger continued. "Officers summoned personnel from [the San Francisco Fire Department] who arrived on scene and extinguished the fire. At this time we are continuing our search for the suspect. To this point no injuries have been reported as a result of this incident."

Larry Chatfield, who said he lived "several doors away," was standing behind crime scene tape at around 1:30 p.m.

"All they said was that it was a naked guy wielding a knife," he said, adding that this information was also shared on the neighborhood safety app Citizen.

Thank you @RafaelMandelman for your support on scene and care you showed to those community members affected and the public safety personnel who responded. https://t.co/TbuL79HXvk pic.twitter.com/zf78OZt7kA— SAN FRANCISCO FIRE DEPARTMENT MEDIA (@SFFDPIO) March 5, 2021


Gay District 8 Supervisor Rafael Mandelman said the incident started at the time of a wellness check.

"It happened to be a guy who was known to neighbors," Mandelman told the B.A.R. on site. "I don't think he was a resident — but he'd spent some time in the building."

Mandelman said that "multiple folks had restraining orders" against the man, whom Mandelman also said was without clothes and wielding a knife.

Tom Temprano, a gay man who is a legislative aide to Mandelman, told the B.A.R. that five adults and an undetermined number of children have been displaced.

Mandelman said that the fire department was also able to save cats that were in the building.

"There were multiple opportunities for us to get this person help," Mandelman said. "They never did."

Anyone with information regarding this investigation is asked to call the SFPD 24-hour Tip Line at 1-415-575-4444 or Text a Tip to TIP411 and begin the text message with SFPD. People may remain anonymous.

Updated, 3/5/21: This article has been updated with additional information.