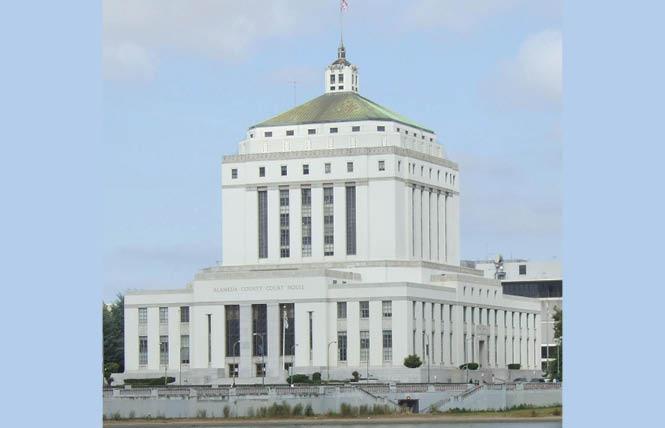 Alameda County, the Rene C. Davidson Courthouse in Oakland is shown here, has the highest number of out LGBTQ judges in Northern California. Photo: Courtesy Structurae.net

The number of LGBTQ judges serving on California state courts has spiked by 15.87% over the last year. It is a marked change from 2019, when the ranks of LGBTQ jurists remained flat at an official count of 62, the same as was reported in 2018.

According to the latest demographic data for the makeup of the state courts, released Monday, March 1, there was an official tally of 69 LGBTQ judges as of December 31, 2020. But the number of LGBTQ people serving on the California bench is now at least 73.

That total includes the November elections of lesbian judges in Alameda and Santa Cruz counties, who were sworn onto their courts in January, and the appointment of a gay man to the Alameda County court, who was sworn in March 1. Alameda, now at eight out judges, has the most of any county in Northern California.

And as the Bay Area Reporter has noted in its annual coverage of the judicial demographic data, gay 2nd District Court of Appeal Justice Luis A. Lavin continues not to be reflected in the official report. It does list the three other known out state appellate justices.

"A double-digit increase in LGBT representation is quite meaningful. But there's still work to be done. LGBT judges make up much less than 1% of the judiciary," San Francisco Superior Court Judge Joseph Quinn, a gay jurist who advises Governor Gavin Newsom on filling judicial vacancies, told the B.A.R. "I'm confident that Governor Newsom will continue to work to make the judiciary more inclusive. And I'm confident the voters will assess candidates fairly. If I'm right, then we can look forward to more judges who look like us, share our life experiences and understand our community."

The Commission on Judicial Nominees Evaluation 2020 Statewide Demographics Report released March 1 revealed it had reviewed 144 candidates' qualifications for judicial office last year, and 10 of those were known to be from the LGBTQ community. Two lesbian applicants were found to be well qualified and three were deemed qualified.

The annual demographic information is often inaccurate and does not include every known LGBTQ jurist, as the forms are not always filled out by the judges or they will not answer all of the demographic categories they're asked about. Of the 1,703 respondents to the 2020 report, 393 justices did not provide their sexual orientation or gender identity; the bulk of those, 374 judges, serve on trial courts at the county level.

The report for the first time indicates there is an out member on the California Supreme Court due to Newsom's appointment last year of Martin Jenkins, a gay man who had been the governor's judicial appointment secretary. All six of his colleagues on the state's highest court identify as heterosexual per the latest report.

In the nine-county Bay Area, the superior courts in Marin, Napa, and Solano counties continue to have no LGBTQ judges on the bench per the judicial demographic data. There are three LGBTQ judges in Santa Clara County, two each in Contra Costa and San Mateo counties, and one in Sonoma. San Francisco, at seven, has the third most LGBTQ jurists of any of the state's county courts.

The Los Angeles Superior Court, at 24, continues to have the most out jurists, according to the 2020 data. San Diego County has six LGBTQ judges, while there are five serving in San Bernardino County.

The Superior Court in Orange has three LGBTQ jurists, while those in El Dorado, Fresno, Imperial, Riverside, Sacramento, and San Joaquin each had one.

Late Monday Newsom posted his judicial appointment data online for 2020, showing he appointed seven LGBTQ judges in his second year, accounting for 11.3% of the 62 judicial nominations he made in 2020. It was a marked improvement from his first year in office, when none of the 15 people Newsom named to Superior Court seats in 2019 were LGBTQ.

"I am deeply committed to building an inclusive administration that reflects all aspects of our state's diversity. The people of California are better served by a range of voices, perspectives and backgrounds in our judiciary and throughout state government," stated Newsom.

A total of 17 LGBTQ people applied to be appointed to judicial vacancies last year. Over the last two years Newsom has been able to pick from a pool of 776 judicial applicants.

"It's exciting to see Governor Newsom appointing more LGBTQ judges. It's exciting to see voters retaining LGBTQ judges, not only in places like LA and San Francisco, but San Bernardino and other counties, and electing LGBTQ candidates to open seats, like happened in Alameda with Judge Elena Condes," stated Quinn. "And of course it's thrilling to have our first out member of the Supreme Court, Justice Martin Jenkins."

Quinn added that, "A strong and independent judiciary has never been more important. To be strong, a judiciary must be accepted as legitimate. And the keystone of legitimacy is inclusiveness. We are fortunate that Governor Newsom, his appointments staff and California voters understand this."

Thursday, March 11, the Williams Institute at the UCLA School of Law will be hosting a virtual panel about how LGBTQ people can join the California bench. Joining the law and public policy LGBTQ think tank for the discussion will be Lavin and out Los Angeles Superior Court Judges Dean Hansell and Kate Chilton.

To RSVP for the online forum, which begins at 5 p.m. Pacific, click here.

Updated, 3/2/21: This article was updated to include information from Governor Gavin Newsom's judicial report.