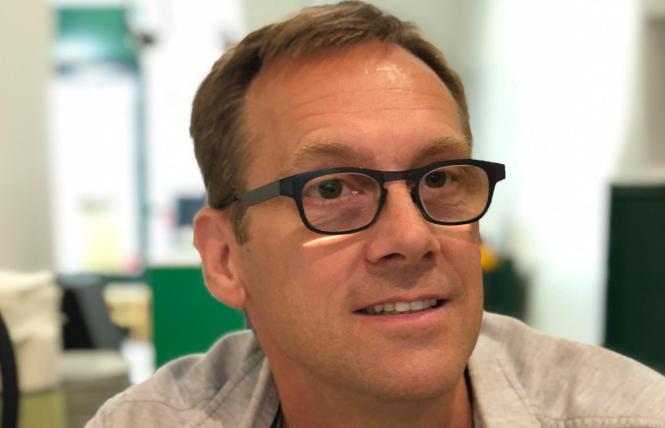 Aaron Hyland had been serving as president of the San Francisco Historic Preservation Commission. Photo: Screengrab

Come its March 3 meeting San Francisco's Historic Preservation Commission will no longer have anyone from the city's LGBTQ community serving on it. The lack of representation comes as numerous queer historic issues are expected to go before the advisory panel in the coming months, from landmarking of LGBTQ historical sites to designating queer-owned legacy businesses.

The mayor chooses the oversight body's seven members and the Board of Supervisors confirms the appointees. Four of the seats are currently up for appointment. While Mayor London Breed has renominated two commissioners for new terms — straight allies Diane Matsuda and Chris Foley — she did not reappoint the panel's two gay members, Jonathan Pearlman and Aaron Hyland, who had been serving as the commission's president.

For Hyland's Seat 1 on the commission, set aside for a historic architect, Breed has nominated Ruchira D. Nageswaran, a senior architect with the firm Knapp Architects Inc. The Board of Supervisors' rules committee will take up the trio's nominations to terms ending December 31, 2024 at its meeting Monday, March 1. The entire board will vote on them at its meeting Tuesday, March 2, in order to see that the commission has enough members on it so it can meet next Wednesday.

Breed has yet to nominate someone to Pearlman's Seat 3, which is to be filled by an architectural historian. Jeff Cretan, a spokesman for Breed, told the Bay Area Reporter Friday that no decision has been made yet. He said the mayor would take LGBTQ representation under consideration as she considers whom to name to it.

"We are still evaluating that one," said Cretan. "The mayor is obviously supportive of seeing members of the LGBTQ community on commissions and in department leadership."

Nageswaran did not return a call seeking comment, while Pearlman, first appointed in 2013, declined an interview request. In an emailed reply, he expressed his disappointment with the mayor's decision.

"Needless to say, I am very disappointed that I will not be reappointed. That said, however, I would rather not discuss it with you because I might say something that I regret," wrote Pearlman, a principal of Elevation Architects.

When reached by the B.A.R. Hyland would only say he is interested in remaining on the commission. He also was first appointed in 2013.

"I would love to continue serving," said Hyland, an architect who owns an eponymously named architecture, preservation, and cultural heritage consulting firm.

Push to reappoint Hyland
LGBTQ leaders are pushing Breed to name Hyland to the commission's Seat 3 so he can continue serving and ensure the community has a voice at the table.

Hyland last week was the lone commissioner to vote for landmarking the entire property where the late pioneering lesbian couple Phyllis Lyon and Del Martin lived in Noe Valley. The rest of the commission sided with the new property owners who prefer seeing just the two-floor cottage the women lived in become a city landmark and not the undeveloped garden section where they intend to build a home on.

"I do have concerns about the loss of LGBTQ representation on the Historic Preservation Commission," said gay District 8 Supervisor Rafael Mandelman, who has suggested to the mayor that Hyland be reappointed.

Mandelman told the B.A.R. that the new appointee, Nageswaran, is not from the LGBTQ community.

Shayne Watson, a lesbian who is an architectural historian specializing in LGBTQ history and co-wrote San Francisco's 2015 citywide LGBTQ historic context statement, has also expressed support for seeing Hyland remain on the commission. Because she doesn't live in the city, Watson said she was ineligible to apply to serve on the advisory panel.

"The loss of HPC President Aaron Hyland would be a crushing blow to LGBTQ heritage preservation in San Francisco. Along with Commissioner Diane Matsuda, Commissioner Hyland has been the loudest voice on the HPC advocating for the intangible heritage of underrepresented minority communities in San Francisco," stated Watson in an emailed reply. "Under his leadership, the HPC has become a national model in retiring outdated preservation practices that favor the architecture of heteronormative white men over the contributions of BIPOC and LGBTQ communities."

Terry Beswick, executive director of the GLBT Historical Society, also expressed concern about the commission lacking any queer representation on it. He too would like to see Hyland remain on the oversight body.

"Our history still is under threat of being lost. Our institutions, our businesses are being lost in the midst of this pandemic," Beswick noted in a phone interview. "Frankly, the LGBTQ community has items of critical importance that come before the commission regularly, as regularly as last week. We need to have our voices represented at the table."

In phone interviews with the B.A.R. Matsuda and Foley both voiced support for addressing the commission's work through a racial and social equity lens. In particular, they both agreed the city should be landmarking more LGBTQ historic sites and promoting the legacy business program to queer merchants, entrepreneurs, and nonprofits.

"I entered the world of preservation because of my work in documenting histories and stories that were never told. I was discovering a lot of stories, particularly among people who are often not represented in the mainstream history textbooks and never get recognized or praised for their work," said Matsuda, a native San Franciscan who has lived in Japantown for decades and in the 1980s worked for Congressman Philip Burton and then for his wife and successor Congresswoman Sala Burton. "I wanted to find different ways to tell stories."

A staff attorney with Asian Pacific Islander Legal Outreach, Matsuda is also director of special projects at the Japanese Cultural and Community Center of Northern California. In the 2000s she served four years as executive officer of the California Cultural and Historical Endowment in Sacramento and was named to the city advisory panel in 2008.

She said she would miss working with both Pearlman and Hyland as the commission "had a great team" and would continue to seek the guidance of Hyland, as they had become particularly close over the years. And she hoped various communities would seek out her support for various preservation projects they are working on.

"I believe preservation is not only viewed through buildings rich white people own. There are many buildings that have very important and wonderful stories," Matsuda told the B.A.R. "And we need to start looking at preservation in another light and intangibles, things you can not readily see visibly like folklore, customs, and traditions that are passed on."

Foley, a real estate broker and developer, was appointed to the oversight panel in 2019. He is a founder and chairman of the development firm Ground Matrix, whose projects include the food hall inside the Twitter building on Market Street.

He is also a father to a 13-year-old daughter who is Thai American and came out as lesbian over two years ago. Foley, a native of Indiana, told the B.A.R. one of the most important people in his life was a gay former Marine, Paul Walker, who came out in the 1970s. He moved in with Walker in Indianapolis at one point when he was having issues with his own family.

"He taught me everything I know about real estate," said Foley, who has been raising his daughter largely on his own after his former wife reacted negatively to her coming out. "The amount of people critical to my life who have been LGBTQ is pretty ginormous."

Like Matsuda, who was an early advocate for the creation of the legacy business program, Foley sees it as critical for assisting the city's small business community survive the economic fallout brought about by the COVID pandemic.

He too will miss serving alongside Pearlman and Hyland, both of whom he called this week to talk about their not being renominated.

"I will miss them both. I don't think Aaron and I ever really disagreed on an issue," said Foley. "Jonathan and I did a couple times. But when we didn't agree we would make a joke about it and still have a drink together."

Should Breed decide to reappoint Hyland in the coming days, there is a chance he could make it through the approval process at the Board of Supervisors and rejoin the commission in time for its March 17 meeting.

Watson told the B.A.R. she remains hopeful that Breed will nominate an LGBTQ community member to the panel.

"In 2021, when all of us are looking through the lens of diversity and equity, it would be a shame to upend or reverse the progress we've made on a more inclusive preservation program in San Francisco," she wrote.

While he welcomed the straight commissioners being supportive of queer preservation matters, Beswick said out representation is still needed.

"We also can't be excluded from these decision-making bodies as queer folks, so let's not slide into thinking that is all taken care of," he said. "I know the mayor supports the queer community. I am confident she will come up with appropriate representation at the HPC.

"A lot is at stake," added Beswick.