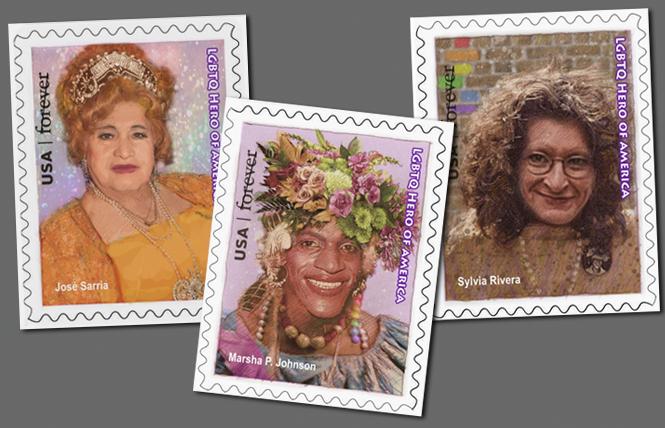 Nearly two-dozen LGBTQ leaders and advocates have signed on to the campaign to see the U.S. Postal Service issue stamps honoring three deceased drag icons who have become heroic figures within the LGBTQ community. Helping to co-chair the effort is Rea Carey, the executive director of the National LGBTQ Task Force.

The national campaign is pressing for the federal agency to create postage featuring José Julio Sarria, Marsha P. Johnson, and Sylvia Rivera. They would be the first such stamps issued in honor of drag performers.

Cathy Renna, the interim communications director for the task force, told the B.A.R. that Carey was "extremely busy" and couldn't provide comment for this story. She said the organization is supporting the campaign because it understands "the contributions that the drag community has done for the LGBTQ community and visibility is something that we know is powerful to people."

Among those serving as honorary co-chairs of the postal campaign are drag queens Sister Roma, with the Sisters of Perpetual Indulgence San Francisco chapter, Chad Michaels, who won the first season of "RuPaul's Drag Race: All Stars," and CoCo LaChine, an empress with the Imperial Court of New York; Matthew Shepard Foundation founders Judy and Dennis Shepard; and Jack Thompson, the first trans person of color to be named International Mr. Leather.

San Diego resident Nicole Murray Ramirez launched the campaign last month after the Bay Area Reporter contacted him for comment about several stamps issued to commemorate the 80th birthday of Bugs Bunny depicting the animated rabbit in drag. It is believed to be the first time drag has been featured on U.S. stamps.

Known as the Queen Mother I of the Americas and Nicole the Great within the Imperial Court System, Murray Ramirez leads the philanthropic organization within the drag community that Sarria launched 55 years ago. He shared an exclusive first look with the B.A.R. of mockups for what the trio of stamps could look like created by Denver-based artist and illustrator Thomas Haller Buchanan, a straight ally.

Reaction to the drag stamp campaign has been "overwhelmingly positive," said Murray Ramirez, a gay man who already had the Human Relations Commission of San Diego on which he serves vote in support of the drag stamps campaign. He expressed confidence the stamps would be approved and issued during the first term of a President Joe Biden administration, should the former vice president be elected in November.

"We have gotten all these acknowledgements already, so I am looking forward to a Biden administration and a postmaster general with the common sense and intelligence to issue them. I think that will happen and I think the possibilities are there," said Murray Ramirez.

He previously chaired the national campaign that saw a stamp honoring the late gay San Francisco supervisor Harvey Milk be issued in 2014. Murray Ramirez has also led the effort to honor the late Black gay civil rights leader Bayard Rustin with his own stamp.

A state park in Brooklyn was renamed after Johnson last month on what would have been her 75th birthday, and officials in her hometown of Elizabeth, New Jersey just announced they would erect a monument to her. State officials said it would the first public monument in New Jersey honoring a LGBTQ+ person and transgender woman of color.

Murray Ramirez is hopeful that California Governor Gavin Newsom will induct Sarria into the state's Hall of Fame this year. He has been pushing for the honor for Sarria for years, dating back to the administration of former governor Jerry Brown.

"I wrote a personal, handwritten letter both to Governor Newsom and his wife about José because it is the 55th anniversary of the Imperial Court," said Murray Ramirez. "A seed planted in San Francisco and nurtured by the court of San Francisco resulted in a real strong royal oak tree with branches in three countries. There are now 70 city court chapters in the U.S., Mexico, and Canada."

As for the issuance of commemorative stamps the U.S. Postal Service's Citizens' Stamp Advisory Committee will recommend ideas for them, but it is up to the U.S. postmaster general to make a final determination. Because it usually takes three years from the time of their selection for the commemorative stamps to be issued, the soonest the trio of drag stamps could be released is 2024. 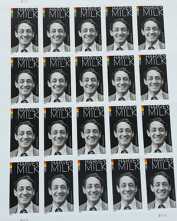