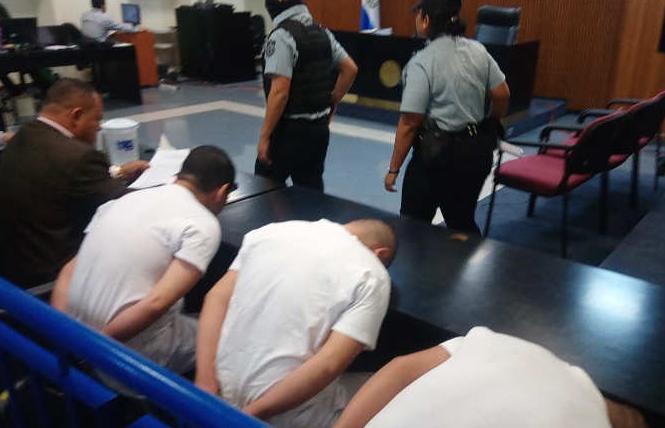 In a landmark case, three former San Salvador police officers were sentenced last month for the murder of a transgender woman.

Each man was sentenced to 20 years in prison.

LGBTQ advocates said that the case was historic.

"This landmark ruling is much needed in a country where LGBT Salvadorians and their families rarely see justice for violent crimes," Jose Miguel Vivanco, Americas director at Human Rights Watch, said in an August 3 news release applauding the conviction. "The outcome of Camila's case sends a powerful message to Salvadorian society that anti-LGBT violence will not be tolerated."

Salvadorian transgender activists were happy to finally see justice, but they were critical that the three men weren't convicted for committing a hate crime and received the minimum sentence.

The men originally faced up to 60 years in prison each under the hate crimes enhancement, according to the country's legislative assembly amendment to El Salvador's penal code in 2015 that included gender identity and sexual orientation under the country's hate crimes law.

In March, Judge Sidney Blanco dropped the hate crime enhancement and the charges of unlawful deprivation of liberty.

"It leaves a bad taste in our mouths that the prosecutor's office wasn't able to build the case as a hate crime," Roberto Zapata, secretary general of AMATE El Salvador, an advocacy group, told Thomson Reuters Foundation. "If the state had recognized the homicide as such, it would have sent a much stronger message."

Fight for justice
Virginia Gomez, a 37-year-old transgender woman, who was best friends and roommates with Diaz Cordova, has been speaking out on the case.

Gomez, who also appears in media reports as Virginia Flores, started her quest to find out what happened to her friend in late January 2019 when she first discovered that Diaz Cordova didn't come home. A little more than a week later, she found her body at the morgue.

Diaz Cordova's killing and conviction is a pivotal moment in LGBTQ Salvadorians' long battle for equal rights and protections in El Salvador.

The LGBTQ community has endured many years of extortion, harassment, and violence at the hands of family, gangs, and government officials, but transgender women have borne the brunt of it.

The average life expectancy for a transgender woman in El Salvador is 35 years due to extreme violence, reported Foreign Policy.

The same week that Diaz Cordova died — in early February 2019 — another transgender woman was killed in El Salvador, reported Foreign Policy. Since then at least five more have been murdered.

In 2018, 19 homicides of trans people were recorded by local organizations, reported Reuters.

The Association for Communicating and Training Trans Women in El Salvador, also known as COMCAVIS, estimated that about 600 LGBTQ people have been murdered in El Salvador since 1993. Government data showed that only 12 out of 109 LGBTQ murders between 2014 and March 2017 went to trial and none ended in conviction, reported Reuters.

In 2017, the United Nations called for an investigation into the violence against transgender Salvadorians following the murder of seven transgender women within five months that year.

"I think that this symbolizes a big advance in the issue of access to justice," she told the Blade, pointing out that that was one of the "most tenuous issues" for the LGBTQ community, especially the transgender community, "who have been targeted for murder and disappearances since the 1990s."

Death sentence
Diaz Cordova came to the capital city from a small rural town in El Salvador where she lived with her religious family.

Like many other trans Salvadorians, her family rejected her, and she endured multiple attacks because of her gender identity. She reportedly worked as a sex worker to survive.

Diaz Cordova fled El Salvador several times due to the anti-transgender violence and extortion from Barrio 18, a brutal multi-national gang. Between 2014 and 2017 she went to Guatemala, Mexico, and the United States. Each time she endured violence similar to what she experienced in El Salvador and returned to her home country. November 2017 was her final return to El Salvador after she sought asylum in the United States and was denied. She was deported soon after.

In El Salvador, Diaz Cordova returned to sex work. Just over a year later she died in the hospital February 3, 2019 after being left on the side of a highway following a brutal attack by three police officers with El Salvador's National Civil Police's 911 System.

An estimated 138 people who were deported from the U.S. to El Salvador between 2013 and 2019 were killed soon after they returned to their home country, according to HRW's report, "Deported to Danger: United States Deportation Policies Expose Salvadorians to Death and Abuse" published in February.

Human rights and LGBTQ Salvadorian and international organizations believe the number could be much higher than reported.

Advocates told HRW that many homicides weren't reported and neither the U.S. nor the Salvadorian governments tracked individuals following deportation from the U.S.

"Our concern is that many of these people are facing a death sentence," Leal Parker said.

Al Jazeera reported that between 2014 and 2018, the U.S. deported an estimated 111,000 Salvadorians back to El Salvador, which has long been under the grip of gang violence and has one of the highest homicide rates in the world.

Elizabeth Kennedy, the lead researcher and co-author of the HRW report, said the country doesn't like its reputation.

"This is a very inconvenient topic because El Salvador doesn't want to admit that they're not protecting their citizens," Kennedy told Al Jazeera. "And the United States doesn't want to know, either, because it is in violation of national and international law."

The officers' lawyers plan to appeal the ruling, reported Reuters.

New report: Syrians perceived to be gay experience brutal sexual assault
Syrians who appear to be gay are sexually attacked by others, according to a new Human Rights Watch report.

LGBTQ and some straight men who were survivors of sexual harassment and severe sexual abuse detailed their experiences in a new report, "'They Treated Us in Monstrous Ways': Sexual Violence Against Men, Boys, and Transgender Women in the Syrian Conflict," published July 29 by Human Rights Watch.

The survivors of sexual assault, who used pseudonyms, described experiences such as forced nudity, sexual harassment, threats of rape, actual rape, and genital violence during Syria's ongoing conflict, in the 77-page report.

A 28-year-old gay man who only was identified as Yousef described being raped with a stick up his anus once the Syrian intelligence agency men discovered he was gay.

As they raped him, the men taunted him, "This is what you like, don't you like it?"

"They were happily doing it," he told researchers.

Others described being detained by the Islamic State of Iraq and Syria, along with their friends and partners and watching them being thrown off of buildings.

"I was detained by ISIS for three months for being a part of protests," said Khalil, a 21-year-old gay man. "I was 15. I was detained with my friends. My boyfriend was thrown from a high building by ISIS."

Transgender women were often misperceived as being gay men and targeted to be attacked with the same sexual assaults, the report found.

The stories highlighted an increase in sexual violence in the war-torn country despite victims' real or perceived sexual orientation and gender identity.

Researchers also found that many survivors of sexual violence in the country don't have the support they need, nor did they seek it out due to shame, fear, stigma, and lack of trust in the health care system. Even those who fled to neighboring Lebanon and sought assistance reported finding services lacking to meet their needs and were often retraumatized.

"Men and boys regardless of their sexual orientation or gender identity — are vulnerable to sexual violence in Syria and often remain unseen and without the support all survivors of sexual violence urgently need," Zeynep P?nar Erdem, the report's author and fellow in HRW's lesbian, gay, bisexual, and transgender rights program, said in a July 29 news release about the report.

Researchers interviewed 40 adult Syrian gay and bisexual men, transgender women, nonbinary individuals, and four heterosexual men who were currently living in Lebanon who experienced sexual violence from January 17 to February 14, 2019. The interviewees were over 18 but some were minors when they were abused.

The report also included interviews with 20 experts that included case workers, doctors, psychologists, and other professionals in the field.

To remedy the situation, the researchers made recommendations to the United Nations and other state leaders, civil society organizations, and independent reporters to improve the situation. These included implementing resolutions targeting conflict-related violence and strengthening policies that offer appropriate responses to male survivors of sexual violence, medical and psychological support, staff trainings, shelters, and awareness campaigns.