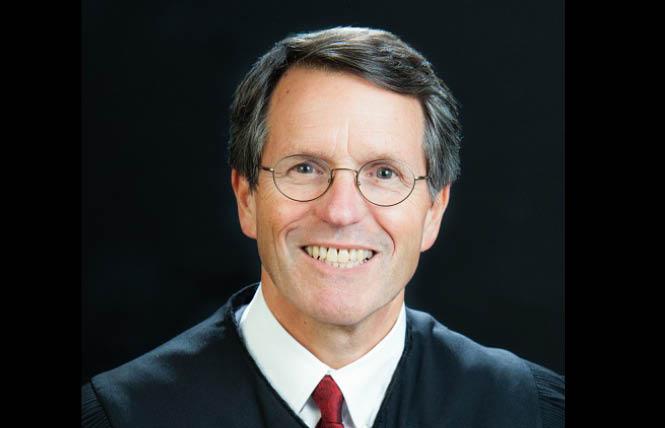 Thirty-six media organizations have signed onto an amicus brief asking that video recordings in the 2010 federal district court trial of Perry v. Schwarzenegger be released later this year.

As the Bay Area Reporter previously reported, the tapes of the trial — which concluded with then-U.S. District Court Judge Vaughn Walker, a Bush appointee to the bench, ruling that Proposition 8's ban on same-sex marriages in California was unconstitutional — are supposed to be released on August 12. (Walker came out as gay after the trial.)

A rule in the Northern District of California prevents the release of some documentary materials for up to 10 years from the closure of the case. On April 1, attorneys for four Proposition 8 proponents filed a motion to keep the tapes of the trial from the public even after the expiration of the 10-year seal.

The motion will be considered by Judge William H. Orrick of the U.S. District Court for the Northern District of California.

In the motion, the attorneys state several reasons why the tapes should not be released — one of which is fear of harassment from supporters of same-sex marriage.

"Proponents consistently opposed broadcast in this trial precisely because they fear that public dissemination of the trial video would subject them and their witnesses to well-substantiated risks of harassment," the April 1 motion states. "The record in this case is replete with evidence of repeated — and frequently serious — harassment of Proposition 8 supporters."

An attorney for the Proposition 8 proponents, Andrew Pugno in Sacramento County, did not respond to a request for comment by press time.

The Reporters Committee for Freedom of the Press, which is headquartered in Washington, D.C., filed an amicus curiae (friend of the court) brief May 13 stating that the tapes should be released.

Indeed, a transcript of the trial has already been released.

The brief was joined by 36 media organizations, including national juggernauts such as CNN, the New York Times, and the Fox television stations, but also Bay Area-based Berkeleyside, Embarcadero Media, and Mother Jones.

KQED-TV, the Bay Area's affiliate of the Public Broadcasting Service, has long sought release of the tapes for documentary purposes.

Caitlin Vogus, a straight ally who is an attorney with the Reporters Committee, told the B.A.R. via phone May 19 that there is no new information brought forward by the Proposition 8 proponents that would override the public interest in seeing the trial tapes; two years ago, Orrick ruled the tapes should remain under seal after August 12, 2020 only if "compelling reasons exist to continue to seal them."

"They are arguing the recordings need to remain under seal but don't bring any new evidence," Vogus said. "They say there is a risk of harassment of the people who testified in favor of Proposition 8 but don't have any new evidence of this."

The case, one of the hallmarks of the struggle for same-sex marriage rights, is part of the historical record, Vogus argued.

"This has been widely covered," Vogus said. "I have not seen any specific example of harassment, just speculative fear, and that is not enough to overcome the interest in public access to court records."

The issue will be heard by Orrick June 17. Due to the novel coronavirus outbreak, at least some federal cases in the U.S. District Court for the Northern District of California are being heard via Zoom (https://www.cand.uscourts.gov/zoom/).

"The Reporters Committee and these organizations filed the amicus brief because it is so important that the public has access to these recordings so we can have the most complete picture of what happened at trial," Vogus said.