SF Pride will 'proceed as scheduled' — for now 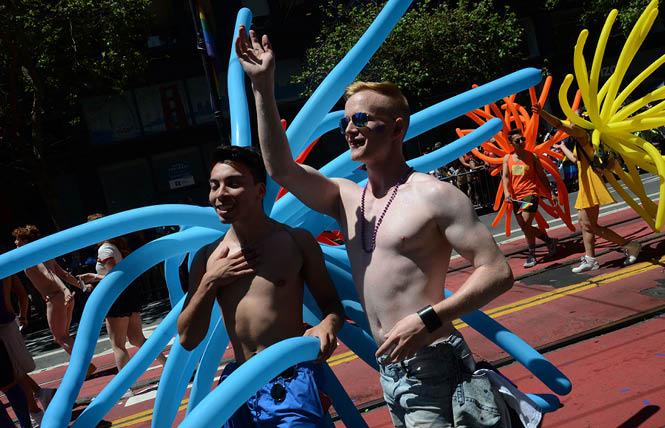 Following the postponement of several California Pride festivities in light of the novel coronavirus outbreak, San Francisco Pride will "expect to know more about our event and what it will look like in the next few weeks, by about mid-April," according to Executive Director Fred Lopez.

The 50th annual San Francisco Pride parade and celebration is scheduled for June 27-28.

"At this time, SF Pride's Parade and Celebration will proceed as scheduled," SF Pride spokesman Peter Lawrence Kane wrote in an email to the Bay Area Reporter March 13.

In an email to the B.A.R. the afternoon of March 16, Lopez wrote that "we will follow whatever directives the city gives us, in the best interest of the health and well-being of our communities."

"The offices of SF Pride are closed for now, and like everyone else, we are working from home for the time being," Lopez stated. "Wherever possible, operations are pausing, and we are working closely with health and city authorities during this challenging time."

Other California cities have already postponed their Pride events.

It was announced March 12 that all Los Angeles Pride events, which had been scheduled for June 12-14, would be postponed to a later date that has yet to be announced.

The reason, according to an article in the Los Angeles Blade, was that the city of West Hollywood had issued an order canceling any event requiring a city permit through the end of June, which is Pride Month.

The first Pride to announce its postponement in the Bay Area was Santa Cruz Pride, which announced it was being postponed on March 13. Santa Cruz Pride was initially scheduled for June 7.

Following that announcement, Long Beach Pride announced March 14 that it was being postponed. It has been initially scheduled for May 15-17.

As the B.A.R. previously reported, non-essential gatherings in San Francisco are severely restricted through April 30 to 100 people or more and people have to shelter in place in six Bay Area counties — Alameda, Contra Costa, Marin, Santa Clara, San Francisco, and San Mateo — until April 7. That means only essential businesses, such as grocery stores, pharmacies, and several others are open.

"Undoubtedly, the breadth and severity of all the recent COVID-19 cancellations have been jarring to everyone nationwide, and we are very mindful of these concerns. But remember: This is U.S. civil society rising to the occasion now specifically so that these disruptions to the fabric of American culture — and to the financial security of everyone whose livelihoods depend on it — do not continue. We remain cautiously optimistic." (COVID-19 is the respiratory disease caused by the novel coronavirus.)

"Our team has been in frequent contact with City Hall, SFDPH, and other city agencies, and we will abide by any and all directives they issue. Have talked multiple times a day with other Pride organizers on the West Coast. We are all pulling together and offering support in this uncertain time," Kane added, referring to the San Francisco Department of Public Health.

"We are grateful to them for alerting us, particularly given that they were not experiencing symptoms during WPF (Winter Party Festival)," the statement reads. "We continue to encourage all WPF guests to monitor their health, practice social distancing, wash hands with soap, use hand sanitizer, and contact their doctor if they think they are exhibiting symptoms."

To avoid COVID-19, San Francisco's health department is advising people to wash their hands with soap and water for at least 20 seconds, avoid touching their faces, cover their coughs and sneezes, try alternatives to the handshake, and stay home if they are sick.