Transmissions: My life is not your hypothetical 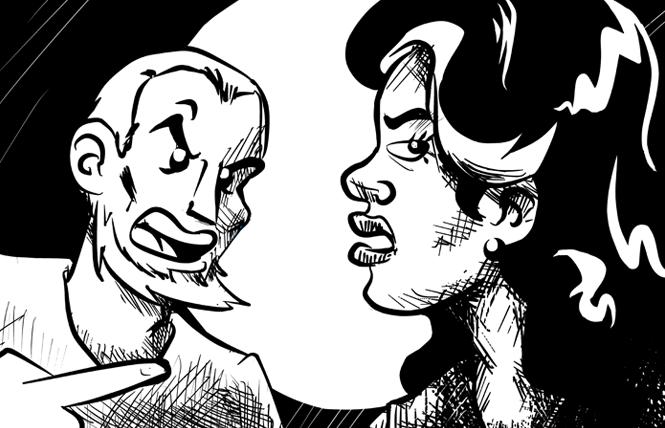 Further, having some sort of rule in place would prevent non-transgender men from simply claiming to be women to steal awards and prize money from women and girls who would be outclassed by competing against a man.

Other states are pressing to criminalize transgender care, especially for young transgender people, claiming that medical professionals, backed by Big Pharma and a shadowy trans lobby, must be misleading young men and women into identifying as transgender or nonbinary in an effort to rake in fat paydays as they conduct irreversible medical procedures on children.

This particular argument has also been popular in some so-called radical feminist circles, with many claiming that doctors are doing this in order to make kids who might otherwise be gay or lesbian into "straight" men and women, misleading them into believing they might be transgender rather than, for example, a butch lesbian.

These arguments fall apart under close examination. There is no "trans lobby" pulling the strings from the dark recesses. Most transgender people are barely scraping by, and have enough issues getting their own medical care, let alone leading a conspiracy to turn everyone transgender. Big Pharma and the rest of the medical establishment, likewise, makes more money off non-transgender bodies, and tends to prefer serving up high bills for insulin and other care over treating the relatively few transgender people in the world.

What's more, young trans and nonbinary people are not offered surgery or even standard hormone treatment, but puberty blockers. The same stuff that is prescribed for "precocious puberty," or puberty occurring at an unusually early age. It's not some sort of hocus-pocus.

I shouldn't even have to note how many transgender people I know who are not straight-identified, and never intended to be so. That argument isn't really worth the bother.

There are other bills out there too. Such as attempts to define "man" and "woman" from a legal standpoint that voids trans and nonbinary lives, or efforts to disallow transgender people to change their birth certificates to better reflect their gender.

All of the arguments behind these bills — heck, all of these arguments against trans rights overall — boil down to pure bigotry. Sure, they're dressed up in hypotheticals and abstracts, but it's really all code for "transgender people are icky."

Go back to the arguments against transgender people using restrooms that match their gender identity. Rather than talk about actual transgender people, those opposed painted pictures of malicious men who would somehow use these laws to go into women's rooms unhindered, and prey upon women and young girls. Sometimes they would clarify that this was an unintended consequence of allowing transgender people into restrooms, while others would simply imply that transgender people themselves could not be trusted in appropriate facilities at all.

The same thing comes up in the above arguments: with the debates about sports competitions, these are so often framed as damaging women and girls, ignoring that transgender women and girls also exist and are harmed by such bills. Rather, transgender people are equated with a non-existent male who seeks to steal the prize money given to women athletes.

Likewise, the argument about "making" people transgender treats us as both victims and victimizers, those who were "made" into trans people by a shadowy trans illuminati, and that group of conspiracists themselves.

The thing is, there is a problem with debating transgender issues as some abstract concept when real lives are on the line.

By disenfranchising transgender people; by pushing us out of society; by making us second-class citizens in sports, in public accommodations; and making our care non-viable for medical professionals to practice, you don't make people decide they are not transgender or nonbinary.

Rather, you push us further to the margins, you make our lives harder, and you facilitate our deaths. You give cover to those who kill us, who view us as deceptive, harmful, or evil. You help breed hopelessness among transgender and nonbinary people, leading us to practices that may shorten our lives, or into the grip of suicidal thoughts or actions.

Maybe, for those who would argue against trans rights, that's OK. For me, this simply isn't acceptable.

I think it is safe to say that being nonbinary or transgender isn't something any of us had hoped to deal with in our lives. We are well aware of how much more difficult this makes our lives, and would honestly rather not be transgender or nonbinary in the first place. It's not something we would choose, any more than someone might choose their sexuality, for example. Making it that much harder on us is simply cruelty.

We are real people who live and breathe. Treating our lives as some hypothetical, abstract concept serves no one. We're not some creature from the shadows, and we're here, ready to share our stories.

We just need people to listen.

Gwen Smith will bleed when pricked. You'll find her at www.gwensmith.com