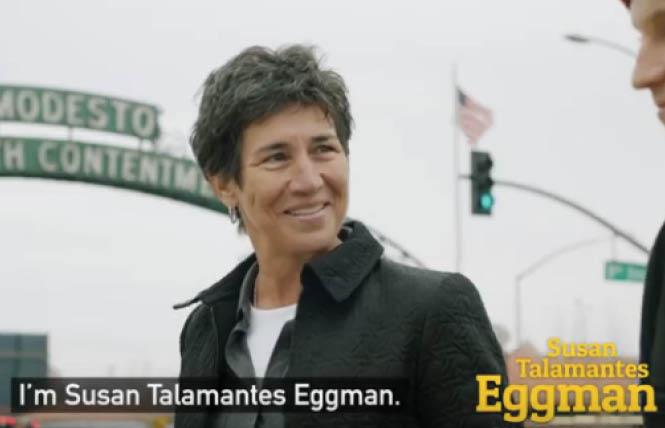 In television ads and campaign videos, LGBT candidates for state legislative seats are highlighting California's twinned homelessness and housing crises. The issues have been of particular concern in the Bay Area for more than a decade and in recent years have also grown in urgency throughout the state, from the Central Valley to Southern California.

It is also showing up in polling of voters as their key issues. In mid-January the Public Policy Institute of California found that Golden State residents consider homelessness to be the single most important issue they want state leaders to be addressing. And the issue crosses party lines, with the PPIC finding that homelessness was the top issue among Republicans (28%), independents (22%), and Democrats (20%) in its poll of 1,707 California adult residents.

"Homelessness is frequently mentioned as the most important issue for the governor and legislature to work on in 2020 across the state's regional, demographic, and political groups," stated PPIC president and CEO Mark Baldassare in releasing the findings.

It is no wonder then that candidates are focusing on the issue in their video messaging. The same day as the PPIC poll was released, January 15, lesbian Assemblywoman Susan Talamantes Eggman (D-Stockton) debuted her first television ad in her race for a state Senate seat.

Called "Crisis," the 30-second spot features scenes of homeless encampments in Stockton and Eggman, a former social worker, speaking with people living on the streets of her hometown. In the voiceover Eggman discusses how her family struggled to help her aunt who was homeless and dealing with mental health issues.

"We need to do more to get people off the streets," states Eggman. "As your state senator, I will."

Eggman, a former Stockton city councilwoman, is a leading candidate to succeed lesbian state Senator Cathleen Galgiani (D-Stockton), who will be termed out of her 5th Senate District seat in December. She is competing against fellow Democrat Mani Grewal, a member of the Modesto City Council, and three Republicans for the Central Valley seat.

Camille Zapata, a spokeswoman for Eggman's campaign, wouldn't disclose to the Bay Area Reporter how much of an ad buy the campaign had spent.

"This is one of several ads set to run over the next month. The ads are running on cable throughout the district," wrote Zapata in an emailed reply.

The campaign also released a 60-second radio spot this month that features veterans promoting Eggman's leadership in elected office, as she is a former Army combat medic. It refers to how Eggman tangled with the federal Veterans Affairs Administration over its slow pace in building a clinic in San Joaquin County.

So Cal races
In Los Angeles, gay Koreatown resident Godfrey Santos Plata, an educator who emigrated as a child from the Philippines, highlights in his first campaign video how he and many other renters in the 53rd Assembly District can't afford to move into the market-rate housing being built in their neighborhoods. Plata is running to unseat incumbent Assemblyman Miguel Santiago (D-Los Angeles) and would be the first out immigrant elected to the Legislature.

"Forty percent of my monthly salary goes to my rent, and for too many families, it is more than half our checks," Plata says in the roughly two-minute video he posted online January 21. "All around us we see luxury apartments we can't afford rise behind encampments of those who have become unhoused in the process."

And he highlights in the video a main talking point of his on the campaign trail, that just one renter serves in the Legislature, while 25% of state legislators are landlords. (Gay Assemblyman Todd Gloria, D-San Diego, is the only legislator who doesn't own a home, according to the news website CALmatters.)

"The campaign video on YouTube is currently set for an online run only," Plata told the B.A.R.

Housing issues also crop up in the introductory, and so far lone, video that lawyer Bijan Mohseni posted to his YouTube page September 30. The gay Los Alamitos native is running for the 72nd Assembly District seat in Orange County against incumbent Assemblyman Tyler Diep (R-Westminster), as are a Democratic Garden Grove City Council member and a Republican former state senator.

"We need to solve our crisis of homelessness and increase our affordable housing," states Mohseni in the roughly two-minute video. Among the changes he would push for if elected, notes Mohseni, is a California "where homelessness isn't accepted as the status quo."

SF race
In the race for the state's 11th Senate District seat covering San Francisco and parts of northern San Mateo County, how to address the lack of affordable housing in the region and around the state is a key issue — if not the top concern — amongst the trio of out candidates. Gay state Senator Scott Wiener (D-San Francisco), who is seeking a second four-year term and has been at the forefront of addressing housing issues in the Legislature, made it the focal point of his first campaign video.

The 30-second online spot, titled "Build More Homes," shows Wiener standing atop Corona Heights Park in the middle of San Francisco with the city's skyline sprawling behind him. In a January 16 email he sent supporters with a link to the video, Wiener referred to his controversial Senate Bill 50 that aims to direct denser housing developments toward transit centers in cities and to lessen the ability for such projects to be blocked by local leaders.

"Up here growth as far as the eye can see. More wealth than any time in human history," intones Wiener in the video. "But we've made it impossible to build housing, driving out all but the rich and leaving too many out in cold, too many struggling to stay in the city we love. I'm working hard everyday to build more affordable homes near public transit and jobs because we can't wait one day longer for more housing if we're serious about the Bay Area being home for all of us."

Asked if the video would be running as a TV ad ahead of the March 3 primary, Wiener wouldn't disclose his "communications strategy" for his campaign, but did tell the B.A.R., "There will be other video ads."

His main opponent, queer Democratic socialist Jackie Fielder, has spoken out against SB 50 and released her "California Homes For All" plan January 22. She would raise $100 billion over 10 years from taxes on corporations and billionaires in the state for a California Housing Emergency Fund. She would designate the money to be used for buying 200,000 existing units put up for sale and building 100,000 new affordable units.

Fielder, an educator who is Native American and Mexicana, has yet to release any paid TV ads of her own or an official campaign video. Her campaign spokesman Julian La Rosa did not respond to the B.A.R.'s questions about their media strategy by deadline Friday.

Since entering the race late last year, Fielder has uploaded a number of videos to her campaign Facebook page, including a 57-second video from her field campaign kickoff January 11.

"There is no reason that we would have the fifth largest economy in the world and we would have 157 billionaires in the state and also have the lowest in the nation per-pupil spending and a quarter of the nation's unhoused population," Fielder says in the video.

The third candidate in the contest for Wiener's seat is Republican Erin Smith, a transgender woman and official with the local Republican Party. She has yet to release any videos about her campaign priorities.