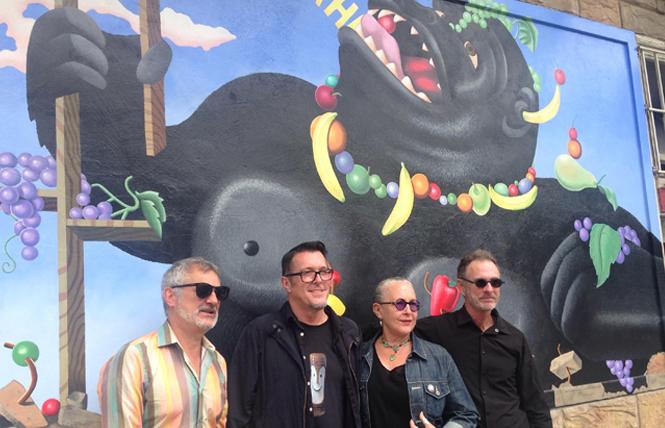 A mural in San Francisco's Castro district was formally unveiled last weekend, infusing a humorous spirit and brightening up the neighborhood.

The "Laughing Gorilla" mural at the corner of 19th and Castro streets recently underwent a renovation after 30 years. As previously reported in the Bay Area Reporter, the mural, originally painted by David Seibold, a gay man, during the height of the AIDS crisis, was in need of a touch-up, and thanks to gay artist Donald Harvey, a longtime friend of the late Seibold, the mural has been restored to its former glory. Michael Ritter, also a gay artist, assisted in the restoration effort.

Seibold's mural was commissioned by the building's owner, Jean Seto, following the 1989 earthquake. Damage was done to the building's faux brick facade, and the specific covering was no longer available. Rather than spend countless hours looking for a replacement for the facade, Seto asked Seibold to paint a mural.

"He made this beautiful piece," Seto, a straight ally, said in a phone interview in June. "I'm very proud of this."

At a small, intimate ceremony Saturday, August 10, the mural was officially unveiled. Friends of Seibold's gathered to admire the newly restored work and to reminisce about someone who was very important to all of them.

"When he got this commission, I said, 'Great! Paint anything you want but no monkeys,'" laughed Lezly Freier, 66. Also an artist, Freier said that pictures featuring monkeys and apes were her signature style at the time. She was unsurprised when she found out that Seibold had done the exact opposite of what she said. "Because of course he did. That was David ... his sense of humor."

The mural restoration was funded by donations to a GoFundMe account, which was promoted with the help of Meredith Clark, 61, who is a straight ally. Clark lived with Seibold, along with several of the others in attendance, in a house just down the block from the mural. She and one of the other attendees, Leslie Hojem, 62, another straight ally, both drove Seibold to his hometown of Olympia, Washington right before he died.

"He was so frail," she said as a joint she brought to smoke in Seibold's honor made its way around the group. "But he always had his joy. He's right with me all the time."

Harvey made sure that Clark's importance in the mural restoration was noted.

"She was the moral support," he said, giving her a hug.

Hojem grew up alongside Seibold in Washington state. The mural and Seibold were so important to her that she flew in from Vancouver, Washington for the unveiling. "We both ended up in San Francisco together," she said. "We sort of rekindled and were really great friends. I love David like a brother."

A few moments of sadness broke the otherwise jovial occasion. The history of the AIDS epidemic was discussed in personal anecdotes, from stories of Seibold at the end of his life to reading the ever-expanding list of names in an attempt to keep track of who had been lost.

"I'd open up the B.A.R. and just see pages of names. People I knew," said Freier when discussing the 1980s in San Francisco, referring to the paper's obituaries.

"Everyone here lived through AIDS in this city," Clark added, broadly gesturing to the group of friends now in their 60s and joking around on the sidewalk. "It affected all of us."

The most important part of the mural to Harvey was the signatures of the artists that were on a wood border — Seibold and his late partner, Luis da Rosa. Though much of the actual mural only needed minimal restoration, the border was completely rotted away, the signatures barely legible. Now, the signatures are restored, along with a small addition on the opposite end noting the date of the restoration and Harvey's name.

Harvey himself couldn't be happier about how it came out. He gave the crowd details on varnishes and paints used.

"I didn't realize how much love there was for it," he said. "It's great to see it all colorful again. Here's hoping it lasts another 30 years."