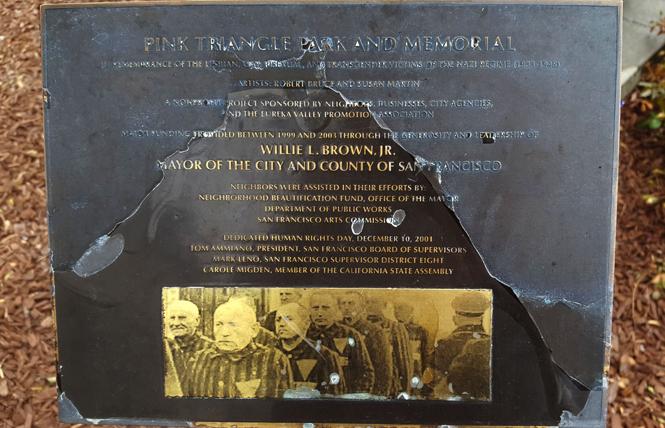 City crews have cleaned up the plaque at Pink Triangle Park and Memorial, which was apparently vandalized. Photo: Meg Elison

City crews have repaired a plaque at Pink Triangle Park and Memorial in the Castro that was apparently defaced by vandals.

As the Bay Area Reporter first reported online May 1, a board member of the organization that oversees the small park reported he discovered the plaque was partially covered with a white substance.

Sister Gaia Love with the Sisters of Perpetual Indulgence and president of the Eureka Valley Foundation, which oversees the park, alerted the B.A.R. last Wednesday afternoon and sent a photo showing a white opaque substance smeared over and defacing the sign. The damage was called into the city's 311 system rather than being reported to police, said Rachel Gordon, spokeswoman for San Francisco Public Works.

Love said that foundation board member Gerald Abbott made the discovery. Abbott did not respond to requests for comment.

The B.A.R. reached out to the city to determine whether it had a plan for the plaque's restoration.

Gordon wrote in an email that workers from the department's paint shop attended to the damaged plaque last Friday, stating: "They were able to clean up the plaque pretty well, but not perfectly. At least it doesn't look vandalized anymore with splatters."

The plaque, although no longer covered with paint, has certainly seen better days. Recent photos show the protective coating over the brass face of the memorial marker is cracked and peeling. The rest of the park is also demonstrably in need of repair and upkeep, with a gradual but remarkable loss of the loose pink stones meant to fill the triangles marked into the ground. The B.A.R. has previously reported on efforts to rehab the park.

Formally dedicated in 2003, Pink Triangle Park is a site of some significance for the queer community of San Francisco and LGBT people around the world. It was the first permanent and freestanding memorial commemorating the deaths of 15,000 gay men in Nazi concentration camps during the Holocaust. The plaque serves as a didactic, explaining the meaning of the park and memorial.

According to FBI statistics, hate crimes have been increasing in frequency over the last three years, with double-digit gains in year-over-year incidents voluntarily reported. With so many recent violent attacks against Jewish communities across the country, any vandalism of a Holocaust-related site is a notable offense.

Gay District 8 Supervisor Rafael Mandelman, who is Jewish and represents the Castro, said he was concerned about the incident.

"Pink Triangle Park is a beautiful memorial to LGBTQ people who were persecuted during the Holocaust and serves as a reminder of the persecution that queer people continue to face around the world today," he wrote in an email. "The recent vandalism in the park is deeply concerning. My office has been in touch with the park's board leadership and I am committed to helping them address this and other maintenance challenges and remain a welcoming and opening public space long into the future."

In an email, Love noted an upcoming meeting for the board of the Eureka Valley Foundation at which a campaign to fundraise for repairs and upkeep would be discussed.

Sister Gaia declined further comment until after the board meeting, which took place after press time.