Gay man sentenced to life in prison for killing friend 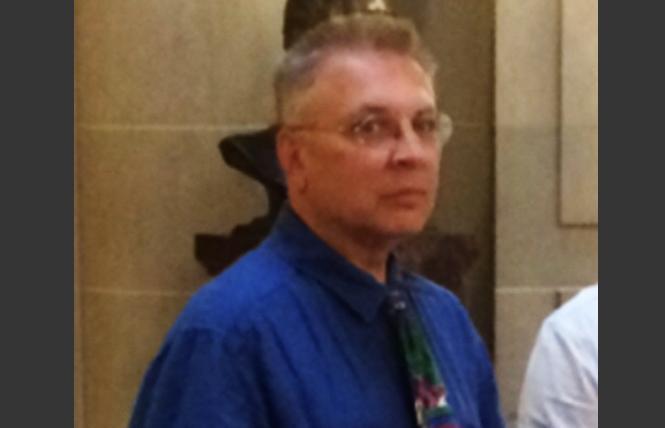 Convicted murderer Michael Phillips was sentenced Friday to life in prison without the possibility of parole for the murder of his elderly gay friend.

Phillips was also convicted of numerous other charges and sentenced on those as well.

In August 2017, Sheahan's body was found in his bloodstained Nob Hill apartment. Phillips was arrested that November in connection with the death. Phillips, 65, pleaded not guilty in April 2017 to murder, robbery, and other charges related to the death of Sheahan.

The jury was convinced by evidence presented by Assistant District Attorney O'Bryan Kenney's during the trial that Phillips brutally killed Sheahan with a cordless phone then cut his wrist to make it look like a suicide before stealing thousands of dollars from him, including paintings, forged checks, and attempted cash withdrawals with Sheahan's ATM card. Kenney told the jury that the motive for the killing was Phillips' desperate love for a Filipino man, Archie Arcaya Fuscablo, and Phillips' need to funnel money to Fuscablo to get him to the United States.

In the months leading up to his death, Sheahan was suffering from Stage 4 lung cancer. Witnesses testified during the trial that Sheahan died from multiple traumatic injuries to the head caused by blunt force trauma.

Prior to issuing the sentence, Superior Court Judge Loretta Giorgi gave the reasoning for her decision.

"[James Sheahan] was facing death of an already terrible thing, terminal lung cancer. Being very sick, he was relying on the kindness of others to help him through, day-to-day," she said. "To have him struck down in this manner is particularly horrifying and it's particularly horrifying when it is done by someone who is in a position of trust to him."

She then looked at Phillips and said, "To that end I find it also very poignant that you continually look only to what has happened to you and not to your friend, who died in a horrible tortured manner over frankly, his wealth, which was modest, and for what?"

Prior to her decision, Phillips had made his own statement in court that began by him saying what a difficult time this was for him.

Assistant District Attorney J. Michael Swart stood in for Kenney, who was not present at Friday's sentencing. He also gave his reasoning as to why Phillips deserved a life behind bars.

"[Phillips] doesn't understand what he did and he still thinks he didn't do it, which is just shocking to me, given all the evidence," Swart said. "To take advantage of a 75-year-old man and to have to die the way he did suffering from terminal lung cancer from the one person in his life who was relying on him is just a despicable act."

Swart said the murder was done entirely for Phillips' "own selfish benefit," and said the "evil he committed is just breathtaking."

Phillips remained emotionless throughout the hearing. His statement, which was read after Swart spoke, said, "I have listened to the prosecution's theories of who I am and listened to Mr. Swart today talk about who I am and everything they said is pretty much 180 degrees away from who I am. I spent my entire life trying to help people. I don't prey on people, I've never preyed on anyone and having my personality and my life fictionalized by other people to make me sound like a horrible person when I am not."

Deputy Public Defender Kwixuan Maloof disagreed with Swart's comments about his client. He said Phillips had maintained his innocence and that, "Just because the jury comes back with a guilty verdict doesn't mean the allegations were true."

In addition to the life sentence, Phillips was sentenced to seven years for covering up the murder, including slitting Sheahan's wrist. He was sentenced to nine years for the infliction of injury on an elder. Additionally, for the robbery, he was given 11 years; for first-degree burglary, residential, 11 years; for theft of an elder four years; and for the theft of a bank access card, six months.

During the hearing, the defense's motion for a new trial was denied. None of Sheahan's family members were present.