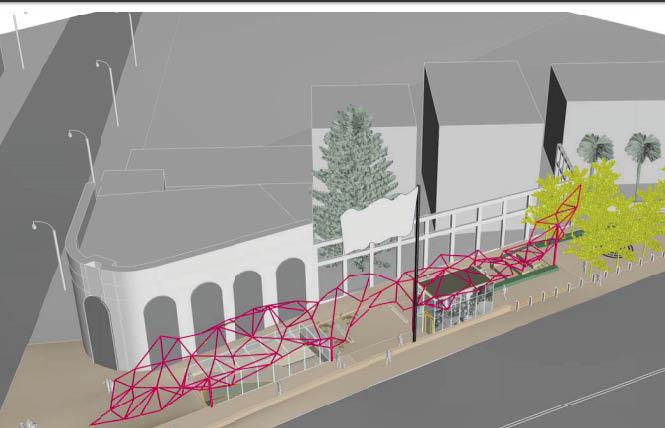 A new proposed structure for the Harvey Milk Plaza project would feature a canopy instead of the bleacher-like seating. Photo: Courtesy Perkins Eastman

Proponents of the overhaul for Harvey Milk Plaza in San Francisco's gay Castro district have updated their plans in order to win support from the city's arts commission.

In particular, they have scrapped plans for a cantilevered seating area above the subway entrance and are now proposing a see-through canopy structure.

The arts commission's civic design review committee at its meeting Monday afternoon will take up the reimagining of the public parklet. It sits above the Castro Muni station at the intersection of Castro and Market streets.

It will be the second time the oversight panel has weighed in on the controversial project, whose backers hope will be approved by the committee next week. The panel could again postpone voting on the phase I plans for the plaza, however, if they remain unhappy with the latest design changes.

When they first reviewed the plans in October, several members of the oversight body criticized the orientation for the planned seating area since it would face toward Twin Peaks and away from Castro Street. They also pointed out that the design would not protect users of the space from the elements, since the area is buffeted by strong winds that blow down from Twin Peaks.

The comments echoed similar criticisms expressed by San Francisco Chronicle design critic John King, who had panned the proposed plaza redesign in the newspaper the morning of the hearing. In addition to its facing into the wind, the bleacher-like seating also provoked objections due to its blocking the historic former bank building that fronts the plaza.

"It is a serious design issue that needs to be looked at again," Arts Commissioner Kimberlee Stryker, who chairs the committee, warned the plaza proponents, as the Bay Area Reporter noted in its coverage of the hearing.

Art historian Paul V. Turner, a former Stanford professor who was friends with Milk and his lover Scott Smith, had also warned that the seating structure would impair views of the 1922 Beaux-Arts building at 400 Castro Street designed by Edward Foulkes that now houses a SoulCycle.

Others had warned that the seating was not only impractical due to the weather conditions at the site but also because it would likely become a magnet for homeless individuals, who already congregate at the plaza. Their presence there has been a contentious issue for decades and has prompted various interventions over the years to address the situation.

'Light steel canopy framework'
In response to the various concerns expressed about its proposal, global design firm Perkins Eastman, which has an office in San Francisco and won a competition to reimagine the plaza, tweaked its design for the structure over the subway entrance. According to its presentation it will give at the December 17 hearing, which can be downloaded here, it is now proposing a "light, steel canopy framework" that would flow along the parklet and over several structures planned there.

The canopy would start above a new glass protective shield over the stairway and escalator entrance into the underground subway station fronting Castro Street. It would then extend over the shaft for a new elevator to be built at the plaza and end in front of a planned grove of 11 ginkgo trees representing each month that Milk held office.

According to the design firm's plan, the canopy could be used for lighted installations and other artwork. Its design would lessen the visual impact on Foulkes' building compared to that of the earlier iteration with the seating. It will present three possible ways to construct the canopy, either using a steel frame, faceted triangles, or a tensile structure.

The plan still calls for shifting the existing stairway and escalator west by 10 to 15 feet in order to create a larger gathering space at the plaza. Doing so would also allow for the creation of a new walkway adjacent to the SoulCycle building leading to where the plaza ends at Collingwood Street.

The existing sunken gardens would be raised to street level, creating a new belowground exhibit space adjacent to the Muni fair gates where Milk's story could be told. The first openly gay person to win elective office both in San Francisco and California, Milk was assassinated a year later on the morning of November 27, 1978 along with then-mayor George Moscone inside City Hall by disgruntled former supervisor Dan White.

In 1985, city leaders dedicated the Castro plaza as a memorial to Milk, a daily transit rider and vocal advocate for public transportation. Considered the front door into the city's gayborhood, the plaza has a small photo display and bronze plaque about Milk just outside the entryway into the Muni station's fare gate level.

Howard Grant, a gay man who designed the existing plaza and transit station, has been helping to lead the opposition toward seeing his work be altered. He implored the arts commissioners in the fall to squash the redesign plans, arguing that the current plaza "should be treasured, not demolished."

In an emailed response late Thursday about the change to the design, Grant told the B.A.R. that he was pleased to see the seating area had been dropped. But he stressed that there are far less expensive ways to better honor Milk at the plaza and that a complete redesign of the area is unnecessary.

"We have been advocating for a glass canopy for months so as to not compete with the old Bank of America facade and to allow views of it from the station - as well (and this is important) as providing views through from Castro to Collingwood for security," wrote Grant. "So it is gratifying to see the unfortunate bleachers replaced with what looks to be an imaginative transparent canopy!"

Nonetheless, Grant said it "remains a mystery" as for why the friends group continues to advocate for the demolition of the transit plaza.

"ALL of their proposals to actually honor Harvey can be accomplished without demolishing it! And at far less than the $30 million Supervisor Mandelman recently estimated the final cost to be," wrote Grant.

Turner did not immediately respond Thursday to an emailed request for comment about the latest iteration of the plaza redesign, as he is currently traveling outside the city.

The group Friends of Harvey Milk Plaza estimates reconstructing the plaza will cost roughly $17.2 million, while others have said it could total as much as $30 million. A proposed park bond set to go before voters in the fall of 2019 is being eyed as a potential funding source, while the friends group has pledged to raise upward of $11 million.

Friends group president Andrea Aiello, who is also executive director of the Castro/Upper Market Community Benefits District, believes the new design addresses all of the issues that the arts commissioners and many community members have brought up about the stairway being too intrusive and too inviting for the homeless.

"I actually think it is really beautiful and it addresses a lot of the concerns that the arts commission and, frankly, some community members raised about the amphitheater," Aiello told the B.A.R.

The new canopy structure, which would be created by an artist to be selected through a community process, would likely also cost less than the stairway, she said.

"We haven't priced it out yet, but our architects think it will be a cost saving," said Aiello.

Castro-based architect Brian Springfield, who is also a member of the friends group, did not immediately respond to requests for comment Thursday. (The B.A.R. will update this story if he does.)

In a message posted Wednesday to its Facebook group, the friends group noted, "The project continues to evolve and move forward! We're excited to be presenting" at the hearing Monday.

The friends group has always said the plans for the plaza redesign are likely to change as the project wends its way through the city's approval process. Not only does the arts commission have to sign off on the project, so do the planning commission and likely the Board of Supervisors. The San Francisco Municipal Transportation Agency and the city's Public Works department both have jurisdiction over the site and an interest in what is built there.

The idea for redesigning the plaza emerged after the city's transit agency set aside $9 million to add a new elevator there to improve access into the Muni station. The agency expects to install it in 2021 and is working with the friends group to mesh its design with that for the new plaza.

San Francisco Public Works is the lead agency for the plaza redesign project, which it considers to be phase II of the overall work at the station. It is conducting a California Environmental Quality Act, or CEQA for short, review of the project that will include an assessment of the plaza's historic importance.

The arts commission's civic design review committee meeting will begin at 2 p.m. Monday, December 17. It meets in Suite 125 on the ground floor of the San Francisco War Memorial and Performing Arts Center at 401 Van Ness.

UPDATED 12/14/18 to add comments from Howard Grant and Andrea Aiello.