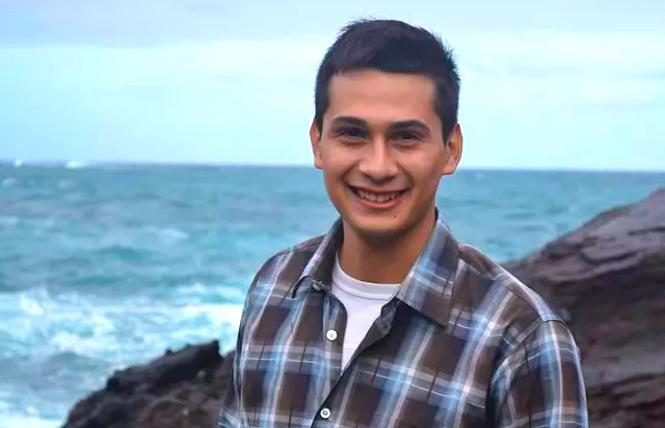 Aaron Salazar, the young, gay Latino man who was found critically injured adjacent to the train tracks near Truckee, California in May, said he did not jump from the train in a video posted on Facebook last month.

Salazar, 22, a passenger on an Amtrak train, was found lying near the railroad tracks at the far east end of Truckee May 15, Truckee Police Chief Rob Leftwich said in a statement in May. Salazar had suffered major injuries and was transported to the hospital in Reno.

The Salazar family has been continually critical of the Amtrak Police Department's investigation, which is still ongoing. At the only news conference the company held May 29, Amtrak Police Chief Neil Trugman said that Amtrak believes the young college student was "very distraught" while on the train and may have attempted suicide. The family strongly disagrees with this narrative and believes Salazar was attacked and is calling it a hate crime. Amtrak is the lead on the investigation.

Salazar came out of a monthslong coma in late August. The November 28 video posted in the Facebook group "Justice for Aaron" is the first showing Salazar speaking. In it he said, "I wanted to thank everybody for the love and support and the prayers and the letters. I want [you] to also know I did not jump off the train; I would never ever try to kill myself."

The text that accompanies the video post, published by Sonja Trujillo, Salazar's cousin, states, "It's an absolute miracle he has progressed as much as he has. So happy he is finally able to speak out about what we have always believed was the truth. Aaron did not jump off the Amtrak train. He would never try to kill himself!! Thank you for the love and prayers."

Amtrak has not released any updates to the investigation after its only news conference on the matter, citing the case in under active investigation. A spokeswoman for the company, Olivia Irvin, told the Bay Area Reporter last week, "We are glad Aaron is improving and look forward to talking with him and any other witnesses as part of the investigation."

It is not revealed in the Facebook group whether Salazar remembers or has said what happened to him. In previous posts, the family stated multiple times that he does not remember what happened due to his head injuries.

"Because of his head injury he don't remember being on a train or even being in Colorado visiting his dad and family," Trujillo wrote in a Facebook message to the B.A.R. "We are hopeful that in time he will remember."

She added, "Aaron was upset when he found out that Amtrak stated that it was an attempted suicide. He said, 'I may not remember being on the train but one thing I do know is that I would NEVER EVER try to kill my myself. I was happy.'"

As previously reported by the B.A.R., at the news conference organized by Amtrak and the Truckee Police Department, which initially responded to the call, details were shared as to why Amtrak believes it to be an attempted suicide.

"There is no physical evidence or witness statements to [suggest] a physical altercation occurring on the train," Trugman said at the news conference.

He said investigators spoke with 300 customers, crewmembers, and Salazar's friends, and said that "individuals who noted interactions with Mr. Salazar shared that he expressed to them a number of life concerns and challenges he was having."

Report lists top affordable LGBT-friendly colleges in the nation
There are some surprising findings in a recent report from Student Loan Hero that ranks the most affordable LGBT-inclusive, four-year universities across the country. The list of "Most Affordable LGBTQ-Friendly College and Universities" ranks the top 10 schools for students attending school in and out of their home state.

This was the first time Student Loan Hero, a for-profit company based in Austin, Texas, conducted a study dedicated specifically to LGBT-friendly college campuses and affordability. Kali McFadden, senior research analyst at the business, said the motivation behind the report was because, "LGBT students have very special needs on campus, and we've all heard the horror stories of schools not meeting their needs and how that inhibits a person's ability to get an education that they are paying for."

The report encourages LGBT students to be proactive about choosing a school that promotes a welcoming environment for students of all sexual orientations and gender identities. Student Loan Hero used data from Campus Pride, a nonprofit dedicated to building LGBT-friendly college awareness, to determine the LGBT friendliness of the schools. Campus Pride's rankings are based on the organization's set of LGBTQ-friendly benchmarks for policies, programs and practices, according to its website. Campus Pride could not be reached for this article.

Of the more unusual findings, said McFadden, who is straight, was the appearance of smaller, rural area schools on the list.

"It's surprising to see tiny state schools in Illinois or Wisconsin that would rate so well," she said.

Additionally, she said that LGBTs who have a dream of attending an elite school, but rule out applying out of fear of not being able to afford it, should still apply.

"Well endowed schools have a lot of money to spread around to students," McFadden said, explaining that students can often receive more in scholarship or financial aid at elite, private schools than at some state schools. Purdue and Princeton are among the more expensive schools that made the list due to their average awarded scholarships and grants.

The purpose of the report, McFadden added, was not only to provide the LGBT community with a resource to help find an affordable and welcoming school but to emphasize the importance of choosing schools that meet their needs.

"For people who maybe feel like they have special needs or are vulnerable in ways because of their sexuality, those things can really interfere with a person's ability to get an education if they don't feel like they have a support system on campus, or their roommate's attitude toward them," McFadden said. "These are real concerns that can have long term effects for people if they don't graduate, get bad grades, or don't enjoy those four years."

The report can be found at https://studentloanhero.com/featured/most-affordable-lgbtq-friendly-colleges-universities/.

Williams said he is in the process of finding a legislative sponsor for the measure that would outlaw conversion therapy for minors and said it includes concerns about LGBT youth suicide.

"[The study] made the connection that LGBT youth who go through conversion therapy are up to six times more likely to attempt suicide than kids who do not," Williams, a gay man, said.

If successful, Utah would be among 15 states, and Washington D.C., to pass laws or regulations protecting youth from conversion therapy. In 2012, California banned mental health professionals from performing conversion therapy on children under 18, but a bill that would ban it for adults was shelved in August after passing the Assembly.

Utah is a unique state explained Williams, in that 79 percent of its legislature seats are Republican and 90 percent identify as members of the Church of Jesus Christ of Latter-day Saints. He mentioned that Utah was the first state to successfully pass LGBT bills in a Republican-controlled legislation in 2015, when it passed Senate Bill 296 that put into place non-discrimination laws for LGBTs in housing and the workplace.

Williams said he will be able to reveal more details on the measure early next year.