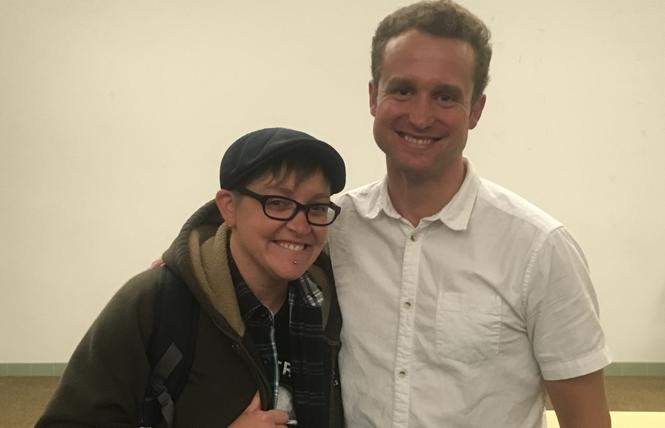 Kelly Cutler, left, and Chris Herring, organizers with the Coalition on Homelessness, last month gave a training on helping the homeless protect their property during sweeps. The coalition is looking for outreach volunteers. Photo Credit: Christina A. DiEdoardo

To many, the city of San Francisco has long gotten more credit for being a "progressive" municipal government than the actual deeds of its employees and elected officials would merit.

To the Coalition on Homelessness, there are few clearer examples of this phenomena of the gap between declared city policy and reported street realities than in how San Francisco Public Works and the San Francisco Police Department handle sweeps of homeless encampments and protection of seized property.

Of course, calling what takes place when city employees show up at these locations a sweep is to indulge in euphemism. For those on the receiving end, it can often feel more akin to a search and destroy mission.

"Right now, we're seeing a lot of people who are right there [when public works arrives] and saying, 'Please don't take my stuff,'" Kelly Cutler, a staff organizer for the Coalition on Homelessness, said at a September 27 training for community activists. "And they're taking it anyway."

In all cases, the results are tragic. In some, they can be fatal.

"The city has an obsession with tents and peoples' belongings right now," Cutler said. "We're getting reports of peoples' HIV medication being thrown away and their Narcan. After a sweep, someone overdosed."

When administered properly, Narcan, or naloxone, can be an effective means of countering an overdose of opiates like heroin. Many local organizations, including the St. James Infirmary, offer training in its use and will resupply registered providers.

Chris Herring, a Ph.D. candidate in sociology who also serves as an organizer for the coalition, agreed with Cutler. According to Herring, public works and the SFPD frequently tell encampment residents "Take what you can, and we'll bag and tag the rest. We give someone 25 minutes to move."

The more things change, the more they stay the same
It's not supposed to be this way.

"Three years ago, we worked with the Lawyers' Committee for Civil Rights, because there was a situation with the destruction of peoples' property," said Herring. "If someone wasn't around [when public works arrived], they treated it as abandoned property."

Thanks to work by the coalition and other advocacy organizations, in May both SFPD and public works changed their policies. According to the coalition, personal property of an encampment resident that is stored in a way that looks like the owner intends to return for it — or which the owner or someone else says is theirs — is classified under the new rules as "temporarily unattended property" and is supposed to be "bagged and tagged" and taken to the public works yard so the owner can have a shot at retrieving their items. There are exceptions for things that pose a health risk, like sharps (needles) and chemicals, or which have been contaminated by mold, urine or fecal matter, are infested with vermin, are perishable, bulky (like furniture) or are simply illegal to possess, like narcotics.

Outside of those exceptions, however, the majority of encampment residents' property is supposed to be seized, rather than destroyed. But Herring and Cutler say that isn't happening.

"Our definition of a good bag and tag is if the property gets to the [public works] yard and is filed," Herring said. "What we're finding is that items are not getting to the DPW yard. Like, none."

The problem has become more acute in the last few months for two reasons. First, according to Cutler, the city has dramatically increased the number of sweeps, so some homeless find their dwellings hit once a day or several times a day.

"There's this thing called HSOC, or Healthy Streets Operations Center, which coordinates the SFPD and DPW," Cutler said. "A coordinated effort sounds like a really good thing, but we have a lack of resources, with over 1,000 people on the waitlist for shelters now."

As a result, the claimed rationale for the sweeps by former mayor Mark Farrell and current Mayor London Breed — to force people off the streets and into housing and social services — rings hollow to many. Indeed, to Cutler, Herring, and other activists, all the city is accomplishing is moving the encampments around. While this may accomplish the city's short-term goal of appeasing angry neighbors who dislike the encampments, it contributes little or nothing toward addressing the overall problem of homelessness.

Second, SFPD has begun to aggressively write citations for violations of Penal Code 647(e), which criminalizes "illegal lodging" defined as living "in any building, structure, vehicle, or place, whether public or private, without the permission of the owner or person entitled to possession or control of it."

While the statute is punishable as a misdemeanor and — theoretically — by jail time, its real value (besides encouraging the homeless to move on) is that it gives the police a way to evade their own policies regarding bag and tag, since they can seize effectively whatever they like as "evidence" of the illegal lodging. Since the district attorney's office has up to a year to file the case after it's referred to them following citation or an arrest, those charged could lose all they own for 12 months before they even see a judge.

The coalition pushes back
That's why Cutler, Herring, and the coalition are training volunteers, both within and without the homeless community, to document what public works and SFPD are doing during the sweeps via sworn declarations and video evidence taken on cellphones.

"What we want to do is show there's a clear trend and pattern here," Herring said. "We're looking for people who have witnessed the destruction or confiscation of their property or someone else's and to answer questions on how that occurred."

If, as they expect, the coalition is able to document widespread noncompliance by city employees with official policies with regard to the property of the homeless, litigation against the city may follow.

For more information or to volunteer, contact the Coalition on Homelessness at (415) 346-7685 or via its website at http://www.cohsf.org.

Spokespeople for public works and the SFPD did not return messages seeking comment.

Brown vetoes gun show ban
In a decision that appeared to be motivated by equal parts of consistency and political cowardice, Governor Jerry Brown vetoed Senate Bill 221 September 28. The bill, sponsored by gay state Senator Scott Wiener (D-San Francisco), would have banned the sale of guns and ammunition at the Cow Palace in Daly City and — by implication — banned gun and ammunition shows there.

Both this column and the Bay Area Reporter, as well as activists ranging from the San Francisco chapter of the Brady Campaign to Prevent Gun Violence to queer youth from area high schools, have demanded the state ban the gun and ammunition shows at the Cow Palace, which is owned by the California Department of Food and Agriculture.

In his veto message, Brown noted that a similar measure had been vetoed twice before, once by Governor Arnold Schwarzenegger and once by him in the previous decade, before claiming that the local board of directors of the Cow Palace was in "the best position to make these decisions."

Of course, because board members of California's district agricultural associations (the Cow Palace's formal name is the 1-A District Agricultural Association) are appointed by the governor and are accountable only to him, Brown is really saying his appointed minions are more credible on the issue than the Bay Area's elected representatives, to say nothing of a majority of the Legislature.

In a statement, Wiener said he would reintroduce the measure in the next legislative session.

"We don't need gun shows in the heart of the Bay Area," he stated. "Our local communities have made it crystal clear that we want these gun shows to end."