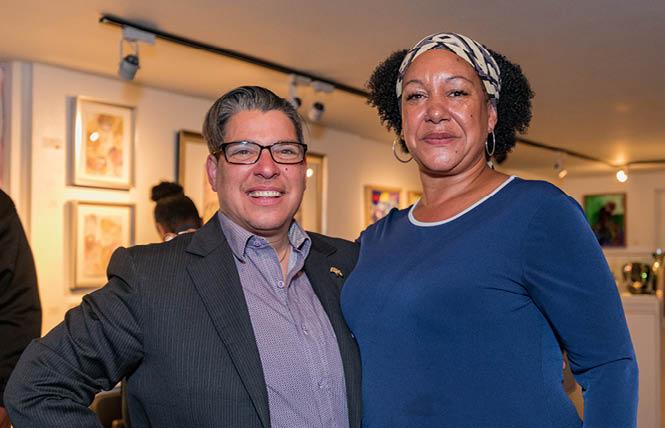 Lesbian at-large Oakland City Councilwoman Rebecca Kaplan Thursday (June 7) ended speculation about whether she would embark on a third run for mayor, and endorsed progressive activist Cat Brooks, an African-American woman who pledged to make the city a sanctuary for all.

Kaplan, who had been spotted at a recent Alameda Labor Council dinner handing out "Kaplan for Mayor" stickers, has acknowledged to reporters, including the Bay Area Reporter, that she was exploring another mayoral campaign; she ran in 2010, losing to Jean Quan, and then again in 2014, when Libby Schaaf won.

But on Thursday at Joyce Gordon Gallery in downtown Oakland, she told a crowd of about 50 that she was backing Brooks, a leader of Black Lives Matter.

"I know we need a person dedicated to justice," Kaplan told the audience, "and the best way to strengthen Oakland is that I'm endorsing and supporting Cat Brooks for mayor."

Brooks, a prominent activist, formally announced last month that she was challenging Schaaf in the November election.

Kaplan started Thursday sending out a media advisory touting an announcement at 5:30 p.m. That fueled speculation that she was making another run at the city's top job.

By mid-afternoon, Schaaf's campaign sent out the results of a poll indicating the mayor had 46 percent support among Oakland voters. The poll, done by EMC Research, showed Kaplan in second with 15 percent. Brooks was apparently not included in the survey, which was done online between May 30-June 4 among 449 likely voters. [Updated: 6/8/18:The poll showed Brooks, whose legal name is Sheilagh Polk, in third at 11 percent. The poll asked about her as Sheilagh Polk/Cat Brooks.]

At the announcement, Kaplan denounced the "push poll" and said it was done illegally because it was not disclosed who paid for it.

Schaaf's campaign did not immediately respond to a request for comment.

[Updated, 10:30 pm, 6/7/18: Emily Matthews, with the Schaaf campaign, responded: "Rebecca's wrong. This is common practice in thousands of polls done every year, and surely some done by Kaplan herself the same way. This is how polls get objective data."

Kaplan also showed a map of the Oakland results for the district attorney's race. While DA Nancy O'Malley won re-election in the county-wide race, Kaplan pointed out that her challenger, civil rights attorney Pamela Price, won in the city.

"Oakland voted for justice," Kaplan said. "This is how people in Oakland voted." [end update.]

"I've had the opportunity to spend time with, and listen to, Cat Brooks, who has been speaking up for justice," Kaplan said.

Among the issues Kaplan cited were police misconduct, and the fact that officers in the Oakland Police Department were promoted even after their roles in a police sex scandal came to light.

Brooks said her campaign would be a "people's campaign." She plans to do a series of people's assemblies over the next two months.