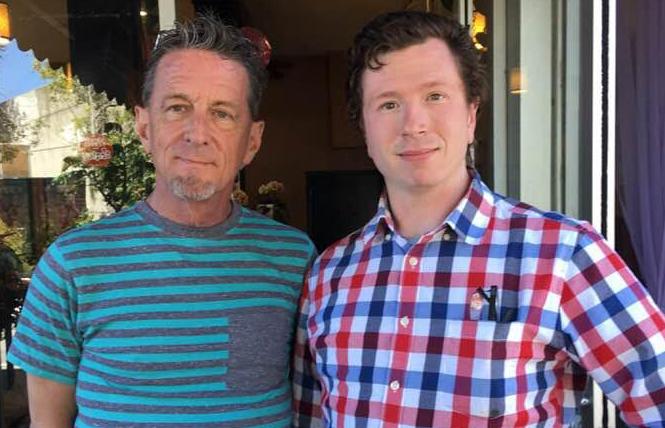 A committee of the Duboce Triangle Neighborhood Association has expressed concern about a proposed cannabis retail store in the Castro.

If approved by the city's planning commission, the Flore Store could open later this year and be the second location for marijuana sales in the city's gay district. Another gay-owned cannabis retail store, to be called Castro Place, is also seeking to open nearby.

Currently, the upscale medical marijuana dispensary Apothecarium, at 2029 Market Street, is the only place to legally buy pot in the neighborhood.

If approved, the 900 square foot Flore Store will be located at 258 Noe Street, currently the home of Gloss and Glam Nail Salon. It will be operated by a team headed by Terrance Alan, a gay man who also owns Flore, a cafe located at Castro and Noe, just across the street from the proposed retail store, and Luke Bruner, a longtime Humboldt County cannabis farmer and straight ally who is director of compliance at the store. Alan signed a lease for the property at the same time he bought the restaurant, in 2017.

As previously reported by the Bay Area Reporter, Alan first disclosed the project publicly at the Castro Merchants meeting May 3. Four days later, less than an hour after the city issued permit applications for cannabis retailers, Alan and his team had submitted a change of use application that would enable them to convert the nail salon to a cannabis retail outlet.

The city notified Alan several weeks later that the application was approved. He is scheduled to take the next step, a hearing before the city's planning commission, July 12. [Update 6/7/18: The planning hearing has been delayed.] If the planning commission approves, the proposed new business would apply to the state for a license.

But at least one neighborhood group has raised concerns.

On June 4, Alan presented details of his plan to the Duboce Triangle Neighborhood Association's land use committee. In an email to the B.A.R. the following day, DTNA land use committee chair, David Troup, detailed the concerns residents have expressed about the store proposal.

"I think most of the concerns are about the compatibility of the use with the location (i.e. right next to a public park and the residential neighborhood) and the proposal to take the rent-controlled apartment upstairs and make it a 'hotel,'" wrote Troup. "The reasons they give for wanting to do that don't pass the sniff test, and there is a lot of suspicion about what their actual plans for that space might be, should they receive that entitlement.

"I don't think people are worried about another cannabis store in the neighborhood, if it's run well and under appropriate conditions, but there is concern about this specific location and the broader (and possibly undisclosed) plans of its sponsors," Troup added.

Troup also said people at the meeting felt the process "is moving too quickly," and that neighbors need more time to evaluate the proposal to see if concerns can be addressed or mitigated.

"I don't think people are being NIMBYs on this issue, and I didn't hear anyone speaking against the idea of another cannabis store generally, so I hope you won't portray us as anti-pot or something," Troup wrote. "But neighbors and DTNA only learned about this proposal very recently, and it will take some time for stakeholders to work together and, hopefully, get to a point where the project can be supported."

On Tuesday, Alan responded that he and the Flore cafe have been actively "and very publicly pursuing cannabis activity at this corner for 18 months."

"We have been on the front page of the B.A.R. and many other publications, both print and digital, sharing our plan and vision for cannabis cuisine, beverages, hospitality and sales," Alan wrote in an email. "We are happy with both the outpouring of support we have received over the last 18 months and maybe more importantly the concerns we have taken in and used to make our plan better."

Alan said the store will serve both the neighborhood and the tourist communities who currently eat at Flore , at 2298 Market Street.

"People will use public transportation above and below the street, along with ride sharing, to minimize traffic," he wrote. "It will bring in shoppers to spend money around the neighborhood. It will have a compassion program for those patients unable to pay for their medicine."

Regarding the flat above the store, Alan said it's proposed to be an artist-in-residence space.

"We have not talked about the artist-in-residence program idea, which has led to the unfortunate label of a hotel for the flat above our storefront," he wrote. "We are listening and modifying our plan now. We hope this process shows our commitment to the neighborhood."

"Flore Store has a plan to co-create products for the home chef like cannabis-infused olive oil and cannabis chutney, a different kind of edible," he added. "We won't have products that encourage immediate consumption of cannabis such as rolling papers and glassware."

Alan will appear before the Castro Merchants meeting Thursday (June 7) hoping the group will endorse the new business. At the meeting Ray Connolly will also present his plan for a proposed cannabis location at 2352 Market Street, the former location of Worn Out West.

In a brief telephone interview, Connolly, a gay man, said he is also looking at other locations in the Castro.

In an interview with the B.A.R. this week at Flore, which Alan purchased last year in hopes of turning it into the city's first cannabis cafe, the entrepreneur talked about his plans.

Alan, who is the chair of the city's task force on cannabis legalization and previously chaired the city's entertainment commission, began growing cannabis in Humboldt County in the 1970s, shortly after he arrived in California from Illinois.

From his earliest days growing, Alan said he became a part of the activist movement that supplied free or low-cost medical cannabis to people living with AIDS and other illnesses.
"Many of our earliest meetings took place right here at Flore," said Alan.

Like many of the other activists, Alan was arrested for growing cannabis, which ironically qualified him to apply for a permit now, three decades later, after the city passed regulations giving priority to San Franciscans who have been jailed for a drug offense, the so-called equity program aimed at leveling the playing field for those who were adversely affected by the war on drugs.

Alan predicts the planning commission will approve the Flore Store application, "because we've been reaching out to the neighborhood from day one and I think we are considered good neighbors," he said.

Alan said the new store will be stocked with a carefully curated selection of cannabis flowers and infused products, mainly provided by small farmers in Humboldt County. Prices will be competitive with other dispensaries in the city, he said.

The Flore Store is part of Alan's long-term plans to organize advocates to press for legal changes that will allow restaurants to cook with cannabis, he said.

Just after he took over Flore last year, Alan created a menu of cannabis "mocktails" made with CBD, the non-psychoactive component of cannabis, and was also serving a CBD-infused beer. Those menu items had to be removed after state and city regulations banned any cannabis-infused food or drink at restaurants, Alan said. Cannabis-infused edibles are widely available at dispensaries, he pointed out.

"I'm not giving up on working toward legalizing cannabis cuisine," said Alan. "It will happen eventually."

For more information on the city's cannabis regulations, visit https://officeofcannabis.sfgov.org.