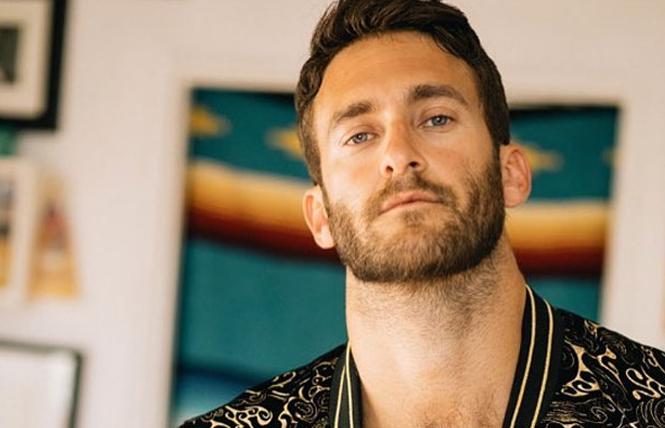 What do the cast and crew of touring Broadway shows do on their time off? If you're Adam Roberts, currently performing as an ensemble actor in the tour of Miss Saigon, you recruit your colleagues and make a few music videos.

Roberts made his Broadway debut in the widely publicized musical, Spider-Man: Turn Off The Dark followed by Tony Award-winning revival of Pippin. He has been seen in the national tour of Dirty Dancing, Off-Broadway in Standard Time and most recently as Cornelius in Ozark Actors Theatre's production of Hello, Dolly! He just finished associate-directing and choreographing a recent production of Broadway Backwards, the showcase of performers switching roles and performing LGBT interpretations of classic Broadway songs.

Music was a familiar art form for the actor since childhood.

"My dad plays guitar," said Roberts, 33. "He comes from Nashville, and his father was Kayton Roberts, a legend in the steel guitar world who toured the world with Hank Snow and other country stars. Growing up, there was never a question of studying music."

Born in Tennessee, Roberts' family moved to Myrtle Beach, South Carolina when he was a toddler, where he later studied at Coastal Carolina University in Musical Theatre with a Business Administration minor.

Now living in New York City for the past twelve years, and residing in Harlem since 2014, Roberts said that he could imagine moving to the West Coast at some point.

"I'm a Southern boy at heart," he said, but New York is where the main theatre work is. "That's been my bread and butter for a while." 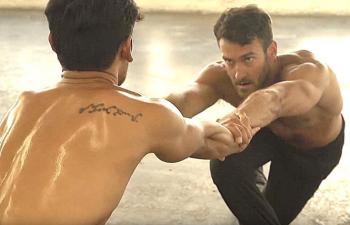 Adam Roberts with Garrick Macatangay in the music video for his song,

Song styles
Roberts' two new songs and accompanying videos are visually gay-themed, but their lyrics and sound are open to broader interpretation. Roberts discussed his own trepidation, however, with making art that gay-identified.

"I come from the South; I have a gay brother, but my parents are very conservative, very religious and they still not really accepting of the fact that I'm gay. There is still a little part of me that can't be honest. But I've broken through the chains of that to be completely honest. I'm a late bloomer and I had to do a lot of work to overcome that. Music really got me through a lot of that. I really hope I can serve as a glimmer of hope."

The videos for "Glue" was shot in Los Angeles during Miss Saigon's residency at the Pantages Theatre. With some lovely choreography and a partnering scene with cast member Garrick Macatangay, the videos complement the songs. Roberts asked the show's associate music director Adam Rothenberg to orchestrate his songs.

"I wrote them on a guitar, but had a vision of a soaring score with strings, and he helped me do that," said Roberts. "The orchestra in our show even played on it as well."

Roberts explained how he and his cast members put together an 'accountability group' to encourage each of their own individual projects while on tour.

"We try to keep each other on track, with deadlines and support," said Roberts. Ensemble player Anna-Lee Wright expressed an interest in cinematography, bought some equipment and directed videos, with costar Macatangay. "It became a big communal project."

"I didn't want to squander my time," he said. "With so many cities, you can find local watering holes and drink your way through a tour, which I also love to do," he joked. "I try to strike a balance between going out and having little adventures, but also cracking down and taking action to get some results."

A glance through the actor's Instagram profile proves his other results in staying fit.

"It's a very fitness-motivated cast," said Roberts. "There's no company barre, since the movement is more pedestrian. But our company manager usually gets gym memberships for us, usually in exchange for some comp tickets." 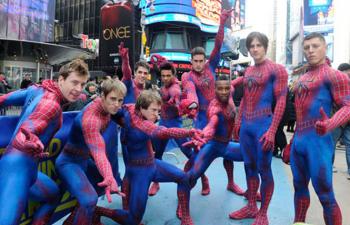 Adam Roberts with fellow Spider-Men in a 2011 promotional event in Time Square.

Spider senses
As one of several webbed wonders in Spider-Man: Turn Off The Dark, Roberts faced a physicality he'd never experienced.

"Nothing could prepared me for that show," he said. "I hadn't done aerial work before, with harnesses, flying over the audience. At auditions, the director asked, 'Are you afraid of heights?' Of course I am, but I said no. I wanted the gig."

After a 'flight audition' with technicians keeping the actors safe, "We learned on the job. It was wild. We had martial artists, gymnastics guys, up to nine guys doing the stunt work."

Like many of today's Broadway actors, a new social media presence has grown as big a fandom as theatre-goers, particularly out gay male actors whose handsome bodies are on display online.

"We all run in the same circles, we know each other personally, and they're super-talented and nice," said Roberts. "That's the thing you find about Broadway; once you're part of the community, they're very supportive. Of course it's competitive, but it's not catty."

Roberts also mentioned the numerous benefit shows that his colleagues organize and perform, including the famous Broadway Cares/Equity Fights AIDS show like Broadway Bares, in which Roberts and many other musical theatre actors perform elaborate strip routines.

As far as the "hunk factor" goes, Roberts revealed, "I grew up scrawny, and have a bit of body dysmorphia. I don't see myself as this 'sex symbol,' but I have embraced my body and have become body-positive. As far as social media goes, I try to be dimensional. It's not just selfies. I do original music covers and share volunteering events, otherwise it's just overkill." 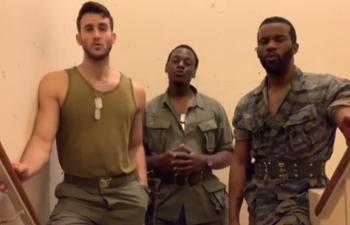 Music in me
For his two new songs, Roberts chose to make it visually clear that they are about male-male relationships, but include aspects.

"They're bounded in truth, but sort of elevated or fabricated for the sake of a good song." Roberts had the serendipitous opportunity to record the songs, including a forthcoming third one, in Nashville. While attending a performance of Moulin Rouge, he sat next to a music-producing couple, who later met up with him and recorded the songs.

With Miss Saigon finishing its tour in June, Roberts, asked about his future projects, mentioned "a bit of restlessness among his cast and crew. The show's taught us all a lot, but we do want to know what's next. Most of us have agents, so we're putting feelers out if anything's coming up."

In his search for more principal roles, Roberts noted how he's soon going to focus on more dramatic roles, and fewer dance parts.

"I'm ready to tackle those meaty roles now. You have to say no to certain things, like 'ensemble boy.' You have to break the mold to reinvent yourself."

He also mentioned video pre-auditions, and how casting directors also check out an actor's social media presence as well. "That's a frustrating aspect of it, being so subjective."
Still, Roberts will return to New York City, where most in-person auditions take place. "When I get back, I'll just hit the ground running."

[Editor's note: corrections have been made from the print edition.]