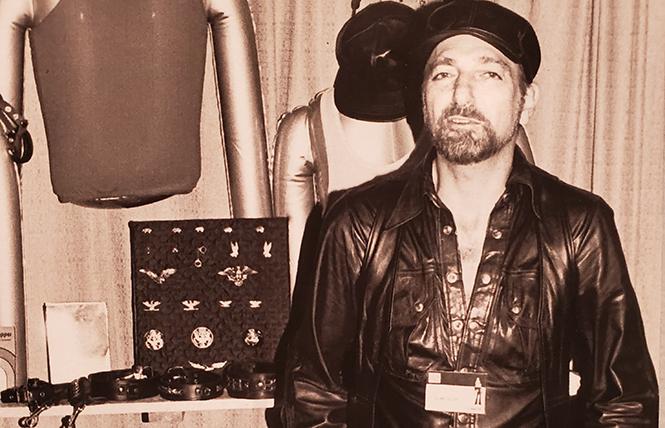 Some time in the early 1980s, I walked into a leather and gear emporium called Mr. S Leather here in San Francisco. A handsome, jovial guy immediately walked up to me and said, "I have the perfect cap for you." He grabbed a leather cap off a shelf, put it on my head, and said, "It looks great on you. You should buy it." So, I did, and I still have that cap today.

The man was Alan Selby, the S in Mr. S Leather that has grown to become the world's premiere store of its kind in the world. Alan passed away in 2004, but his legacy did not. This week a new exhibition opened at the GLBT Historical Society Museum on 18th Street, The Mayor of Folsom Street: The Life and Legacy of Alan Selby, to honor his memory. A large crowd was on hand to welcome this exhibition.

My personal recollections of Alan are all good ones. He was consummately kind, generous, passionate and good-natured. I've never heard anyone say anything but nice things about this fine man.

Alan was born in England in 1929. His first trip to San Francisco was in 1969. He was drawn to the city and eventually moved here in 1979 to open his leather shop.

The exhibition follows Selby's life starting with his establishment of Mr. S Leather in 1979, to his community efforts during the AIDS crisis, to his often-repeated "Daddy of all Daddies" moniker in our city's leather and kink communities. It also highlights the evolution of his initially small shop into what's become a common local gathering place and international destination that continues to occupy a unique place in the history of alternative sexualities. 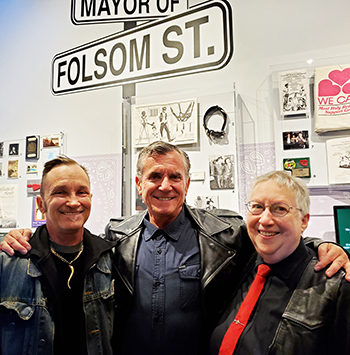 Much of the exhibition is founded upon Jones' recently published biography of Selby, The Mayor of Folsom Street: The Auto/Biography of 'Daddy Alan' Selby aka Mr. S.

I asked Jones why Selby was such an important figure in San Francisco leather history.
"He adopted the city and it adopted him," said Jones. "The Mr. S retail outlet operated as an informal community center for the active leather community South of Market. The AIDS crisis hit the leather community hard and Alan was right there. He took care of things and he took care of people. Years before the rise of 'Daddy culture' he was already a good Dad.

"Alan was a phenomenal fundraiser, and a key player in the development of important service organizations," added Jones. "But he was also hands-on. For over 20 years, he volunteered at San Francisco hospitals, massaging the pain-wracked bodies of the mostly young and often abandoned men who filled those beds."

"Alan founded Mr. S, a leather shop that has had a very large boot print," she said. "When Alan opened Mr. S at its first location, it wasn't by any means the only one; there were several others. But Mr. S has been the longest lasting of the local leather shops, and has become, over time, one of the largest leather emporia anywhere. 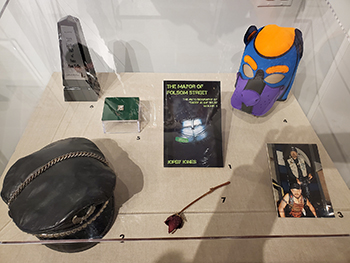 Some of the many items, photos, video and ephemera on display at the GLBT Historical Society Museum for the exhibition honoring the life of Alan Selby. photo: Race Bannon

"He was very active in producing events, such as leather contests and 'Fetish and Fantasy.' These were important events, some of which are still going. Almost all of these were AIDS fundraisers, and Alan was a prodigious and tireless fundraiser for AIDS services.

"And finally, once Alan understood the historic significance of certain items, he withheld them from the auctions and donated them directly. He did a lot of that through me, and I then disbursed these things to the GLBT Historical Society or the Leather Archives & Museum in Chicago."

People like Alan don't come along every day. Sure, the leather and kink communities have their leaders, organizers, volunteers, businesspersons, activists, and so on, but Alan was among the more unique among them. He embodied the core qualities of those who genuinely build and grow community, and he did so without ego.

However, he also at the same time modeled to everyone who was blessed with his presence what's it's like to be both an active kinky player and a mentor to an entire community.

I think sometimes certain aspects of the leather communities tend to forget that it's all founded on a shared sexuality. Alan never forgot that. You would just as easily hear him regale you with his intimate kinky sexual escapades as you would with his heartfelt dedication to helping and improving the lives of those in need.

Mr. Selby, I will forever consider you a role model. I feel confident that many others feel the same way. I'm glad your history lives on, but you're sure missed.

The Mayor of Folsom Street can be seen through September 30, 2019, at the GLBT Historical Society Museum, 4127 18th St., San Francisco. www.glbthistory.org

For Leather events and previous columns, go to https://www.ebar.com/bartab/leather-kink