Giving Back at Pride - Celebrating 17 years, and getting ready for 2020 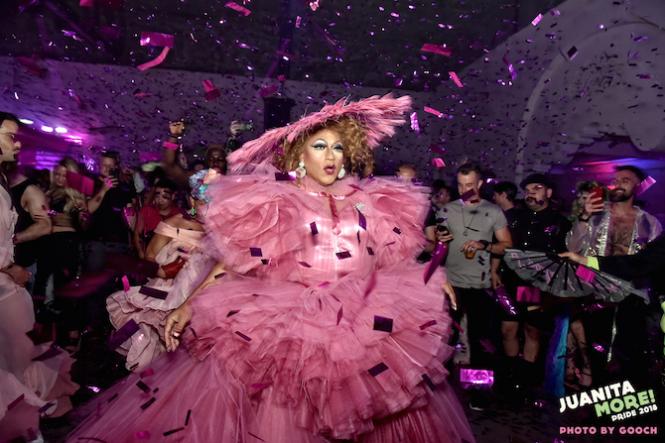 The year is 1972 and San Francisco is hosting its first gay pride parade. There had been smaller gatherings prior, but nothing quite as notable. LGBTQ+ people were ready to claim their place in our society and there would be no turning back. Pride's mother birthed a resistance.

The movement for LGBTQ+ equality and visibility began with queer people refusing to be ignored, abused, or forgotten any longer. Throughout the years Pride has been a time to affirm our lives and dignity, celebrate monumental victories, mourn tragedies, and of course to resist. 2020 will mark 50 years of the Pride Parade in San Francisco, its golden year anniversary.

I remember the first time I marched with a contingent. It was pure magic, stepping off the curb and planting my foot onto Market Street. The heavy weight of not being out to everyone in my life had finally been lifted off my back, and I felt like I had set myself free; I was floating way up high in the clouds. I smiled for the entire day. 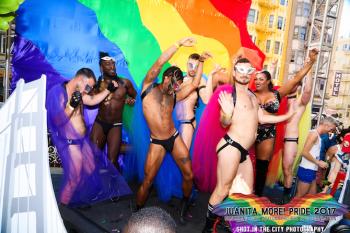 Gogo dancers and a rainbow flag at Juanita MORE!'s 2017 Pride Party at Jones. photo: Shot in the City

It wouldn't be until years later when Juanita was born that I participated in the parade in full regalia. Our little drag troupe, The Fishstix, created a float that was supported by two locally owned queer businesses, George Pet Shop and Space Gallery.

Like royalty, we waved and waved (and waved, and waved) until our wrists hurt. It was a fabulous experience, and I knew I wanted to be a part of the parade every year. And, for a few years, we did just that, teaming up with other local businesses, creating art and celebrating Pride. I once rode on top of a taco truck like a little muneca.

It was during this time that San Francisco was being hit hard with the Dot-com bubble, and SF Pride —along with most of our city— became influenced by the lavish spending taking place all around us.

We saw the impact of big money and corporations float down Market Street. Registration fees began to rise, our makeshift arts and craft floats were being pushed to the back, while the big donors rose to the front of the line. Those of us who were running the underground side of nightlife simply didn't feel included, and it started to seem as though we weren't welcome at this celebration anymore, simply pushed out by wealth. 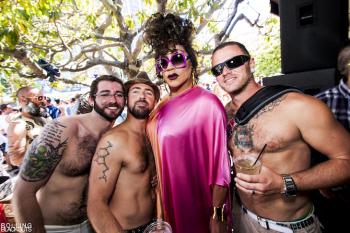 Ain't it Grand (Marshal)
In 2005, I was named Community Grand Marshal by SF Pride and drove down Market Street in a gorgeous car flanked by the MORE! Family. It was truly an honor. It was also the year that I started to produce my annual Pride event, seeking out to support some of our community's most impactful organizations as beneficiaries.

The first was at Sol Luna, the bar and restaurant across the street from the Asian Art Museum. A couple of years later we moved over to Bambuddha Lounge (Chambers Eat & Drink) at the Phoenix Hotel. Where the tagline "Are you going to Juanita's pool party?" still gets used to this day - though they never let you swim in it.

That is where my party picked up momentum and it only grew from there.

One year we were at Mission Rock and at one point I split the party into two venues — Jones and Bambuddha — but eventually settled in at the Jones space. I realized last year that we had outgrown it, so I'm now moving it to the spectacular SVN West.

Once home to the legendary Fillmore West and Carousel Ballroom, this raw, multi-level open floor plan is steeped in musical history. Conveniently located at the end of the parade route at the intersection of San Francisco's two main thoroughfares (South Van Ness Avenue and Market Street). It has a huge ballroom and an even more spacious outdoor rooftop.

The reason for the mounding success and popularity? Because, frankly, I had created a safe place filled with art, magic, love, and togetherness; a sensibility our queer community craves.

It's estimated that some million onlookers and parade participants descend upon San Francisco to celebrate Pride's resilient spirit and diversity, each and every year. The parade has come a long way from its initial walk down Polk Street. There have been a bevy of dogmas to champion, fight for and believe in, although it's still an uphill battle advocating for those beliefs. 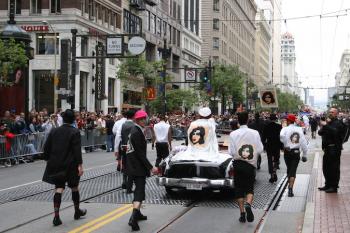 Named a Grand Marshal in 2005, Juanita MORE! and her contingent wore white and black.

Controversy
The SF Pride Board is facing controversy over their recent complacency for allowing big tech corporations — who, frankly, don't support a litany of LGBTQ-positive policies — to participate in the festivities. These companies have started to make improvements, though change can feel like pouring molasses.

I stand with the individuals who have felt the grunt of some bad policies and keep coming to the table to fight to make real shifts happen; the parade must go on.

This year, SF Pride is recognizing my philanthropic efforts that have come from my annual event. So, it goes without saying I couldn't be more honored that "one of the most highly anticipated parties of the year" is now recognized as an Official Event of San Francisco Pride.

"We are very excited to relaunch our official events for Pride 50, and there's nothing in S.F. bigger and better than a Juanita MORE! Party," San Francisco Pride's Executive Director Fred Lopez writes in a statement about the news. "Over the years, she's raised more than $600,000 to help keep this city fabulous and queer, and we could not be more thrilled to partner with her."

This acknowledgment is a significant milestone for me, and my goal is to raise the bar this year as one of the only non-profit events held that weekend. 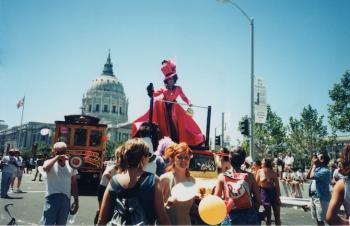 Civic Center in 1996, with Juanita MORE! atop a truck-driven float.

Community support
As the City faces an unprecedented affordability crisis, demand is growing for safety-net services that support the most important members of the LGBTQ+ community — the voices of our future. This year as we celebrate SF Pride's golden anniversary, I have named the SF LGBT Center as the beneficiary.

Funds will help support all of the Center's vast array of programs, including the city's first Host Homes program which aims to provide LGBTQ+ young adults (ages 18-24) with safe places to live by connecting them to temporary community hosts in San Francisco who open up their private homes for a period of 3 to 12 months.

Across the United States, our queer youth still dream of leaving home to follow the rainbow that glows over the City. Though, the cost of living is so high that it's becoming more and more difficult to survive here. Young people flee rejection from their families, unsupportive schools, and communities due to homophobia and transphobia. Many of them are arriving here without employment, housing, or a supportive network and face incredible hardship finding affordable housing, culminating into homelessness.

It's an overwhelming list for me to read, even for myself.

Our community has thrived because of the previous brave generations before us, those legends planted the seeds of both love and compassion, but also strength and resilience. It's my duty as a community leader to keep what was planted alive. Let's keep building the future of our community by supporting our LGBTQ+ youth in their quest to carry on our legacy.