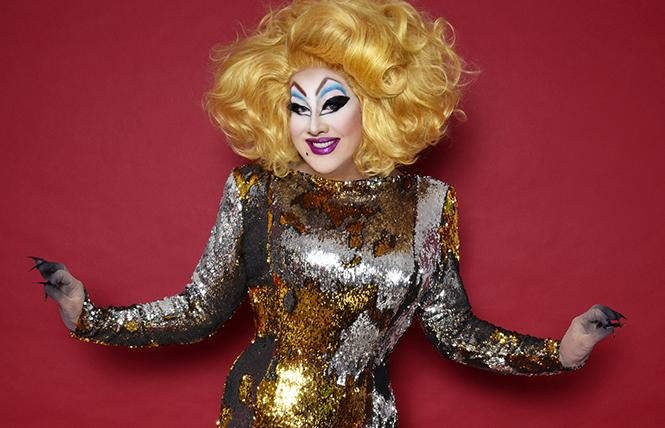 Peaches Christ gets Gremliny at the Castro Theatre.

Joe Dante's Gremlins, produced by Steven Spielberg, is a Christmas classic that horror fans can sink their teeth into. When first released in 1984, this tale of a fuzzy little creature named Gizmo —who multiplies into hundreds of little monsters after he's exposed to water— was a huge hit at the box office. The film generated some controversy due to its violent content and helped to usher in the PG-13 rating.

As much fun as it is, one might not equate Gremlins with gay culture, yet on December 14 drag superstar Peaches Christ brings her own unique take on the film in what promises to be a wild and wacky drag extravaganza, titled Femlins. The show will be seen at the big, beautiful Castro Theater at 3 and 8 pm. Each show will be followed by a screening of Gremlins in 35mm.

"Gremlins is a Christmas movie," Joshua Grannell, Peaches Christ's alter ego, told the Bay Area Reporter. "It's for sure one of the best horror movies /set at Christmastime alongside Black Christmas and Christmas Evil. I think people have forgotten just how twisted and disturbing Gremlins actually is. These little bitches kill people! They're terrifying. The fact that it's set during an idyllic small town Christmas season makes it all the more transgressive and twisted."

So how to transform this holiday monster movie into a show that appeals specifically to the LGBT community?

"Much like any Peaches Christ production, we are taking the story of Gremlins that you know and love and transporting it to a completely queer universe where most people are drag queens and pretty much everyone is queer," Grannell said.

"Aside from that, I think folks should prepare themselves for a bit of a spectacle. I've engaged my haunted attraction partner David Flower to come on board and do some special effects for the show and we are super-excited for the audience to experience some of our new gags."

He added that at one point the show's fourth wall will be broken and that the audience will become performers in the show. A lot of laughter is promised.

Grannell addressed the process by which he chooses films to parody.

"I really look to see if there's an audience of people out there who love a particular film and if there's a bona-fide cult built around it," he said. "Then I watch it through my own lens and determine whether I think I could create a fun parody out of it. I usually look to see if it has any transgressive qualities or if there's something we can subvert to make more queer or strange."

Appearing on stage with Peaches Christ will be drag artists Miz Cracker, Detox, Phi Phi O'Hara, and Migitte Nielsen. Grannell explained what he looks for when he books a guest for his show.

"I really try to match their own character's personality with the character they're parodying and when I write the show I try to create a hybrid that feels natural enough for the audience to get on board," he said. "As much as there is a cult for these movies, there's also a cult for some of these queens. So you want to satisfy the fans by casting in a way that's fun and exciting and that makes sense." 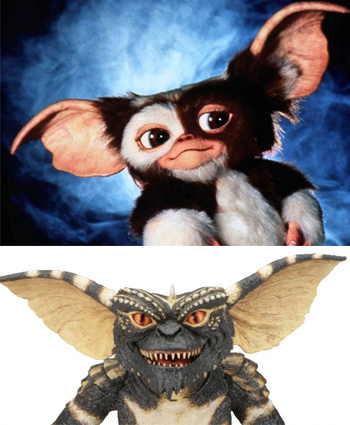 Gizmo and an evil gremlin from the 1984 film Gremlins.

Grannell co-wrote Femlins with Michael Varrati, a screenwriter who describes his work as "focused on the intersection of queer identity and horror." The two have been close friends for a number of years, with Varrati authoring some columns for the Peaches Christ website.

"Femlins is meant as a loving satire and parody of Gremlins," Varrati said. "So we took the movie and injected it with a drag aesthetic. Now, instead of a dad giving his son a pet for Christmas, it's the story of a drag queen giving the pet to her drag daughter in hope that it will help her appreciate the holidays more.

From there we played with the absurd elements and just kicked everything up a notch."

"We blurred the lines between glamorous and monstrous and really dared to ask if there was a difference," he said. "Digging into the material, it was kind of fun to see how much of it lent itself so easily to a drag world. I think people are going to have a blast."

Word of the show has spread online. Even Gremlins' director Joe Dante tweeted his enthusiasm for Miz Cracker's appearance in the show.

Varrati has a message for those who might be unfamiliar with Peaches Christ or Gremlins.

"I would say come for the spectacle and the celebration," he said. "This is a holiday party as only legendary drag queens can do. Peaches, Detox, Miz Cracker, Phi Phi, Migitte and the rest of our cast are all next lever performers and truly at the top of their game. With that line-up you're guaranteed a show! Furthermore, this is not your grandparents' holiday event. We've got monsters and musical numbers and a few surprises that are sure to leave you gagged!"

"If you want to escape the world for a few hours," added Grannell, "and really laugh at get silly and feel part of an audience that's celebratory and fun, this is a great way to treat yourself."