The Polly Polaroid Paradox: Tracking down the woman behind the legend 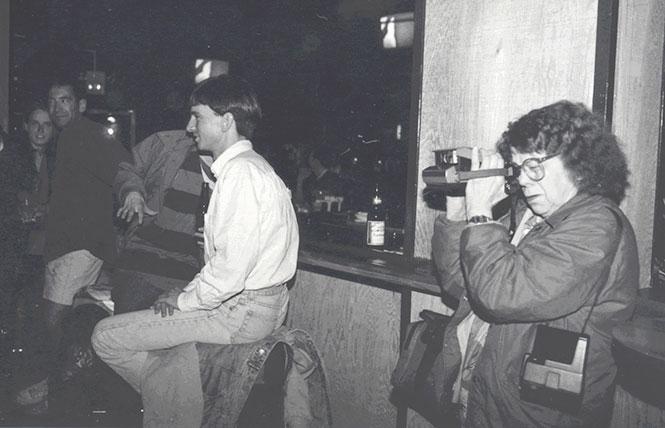 Polly Polaroid was a presence for around two decades in the gay bars of San Francisco — and yet no one seemed to remember her story. She would make her rounds in the bars, saying "Photo to remember the evening?" to all patrons — and yet she disappeared and no one knew what happened.

When asking about her, friends would ask if I was talking about Mildred Gardiner, the famous "Millie" from North Beach, who likewise took photos for years. But no, Millie's beat was North Beach, whereas Polly was well known in Polk Gulch, South of Market and gay venues and events throughout the city. 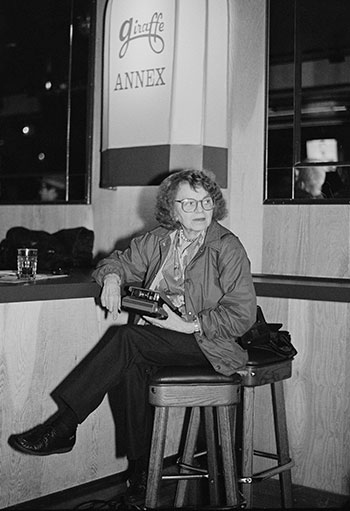 So when JD Doyle (of Queer Music Heritage fame) shared some of her snapshots with me recently, I was once again intrigued and began my hunt for more information.

There are precious few mentions about her in the gay press. In Gay Times from 1986 Rick Mill spoke to both her ubiquity and anonymity in his column. The Piglet's Pen:

"Who is that lady called Polly Polaroid? No matter where I go, she's there. 'Photo to remember the evening?' she humbly inquires. That woman ought to go into the blackmail business, [with] some of the pictures she's taken of me. I mean, here I am on Ringold Alley; three in the morning...the rest is a blur. All I remember is seeing a flash and hearing a little voice saying, 'Photo to remember the evening?'"

She was, apparently, an inspiration to her subjects with her sense of humor as well. In his Bird Droppings column in a 1976 article in San Francisco's Rip Off Rag, the author, who went by the name of 'The Jailbird,' has this item:
"The Bird's quote of the week: Polly Polaroid to a paying customer, 'If you want me to take a picture of Shane's manhood in the bathroom, you may have to spend another six dollars to have it enlarged.'"

The one hint I had regarding her identity came from the Bay Area Reporter, where her photos occasionally appeared. In his April 15, 1976 column, Sweet Lips has a photo from Jackson's (2237 Powell St.) with the credit: Lenore "Polly Polaroid." It is the only time from the 1970s to the '90s that the first name Lenore is mentioned. 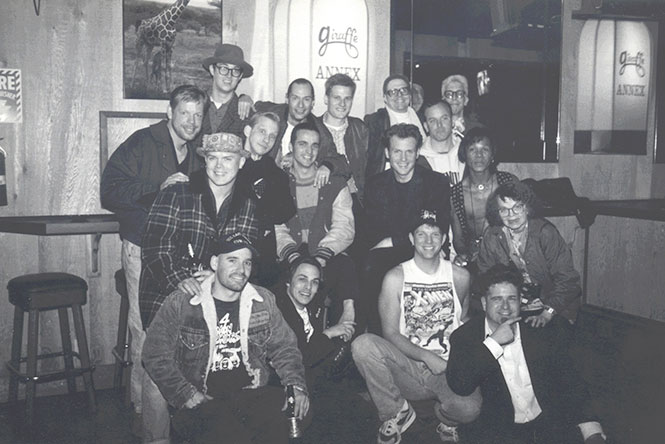 Polly Polaroid (right) with a bevy of '90s nightlife folks at Miss X's Bachelor Party at The Giraffe Annex in the early 1990s. photo: Dan Nicoletta

Stories regarding Polly Polaroid and her exploits abound. In the December 3, 1981 issue of the B.A.R., there is an ad under the headline "Ginger We Love You" in which Polly Polaroid is listed as being a fan of Absolute Empress XIV Ginger, whose reign was from 1979 — 1980.

I asked Collette LeGrande, twice Grand Duchess of the Ducal Court, about the connection between Polly Polaroid and Ginger. Collette replied, "She was good friends with Empress Ginger. I remember she used to even go to the Coronations and take pictures."

I asked Collette whether or not Polly was gay or straight and where she used to see her. Collette replied, "She definitely was a straight woman. The bars and the guys and girls loved her. She used to go to The Cinch a lot." 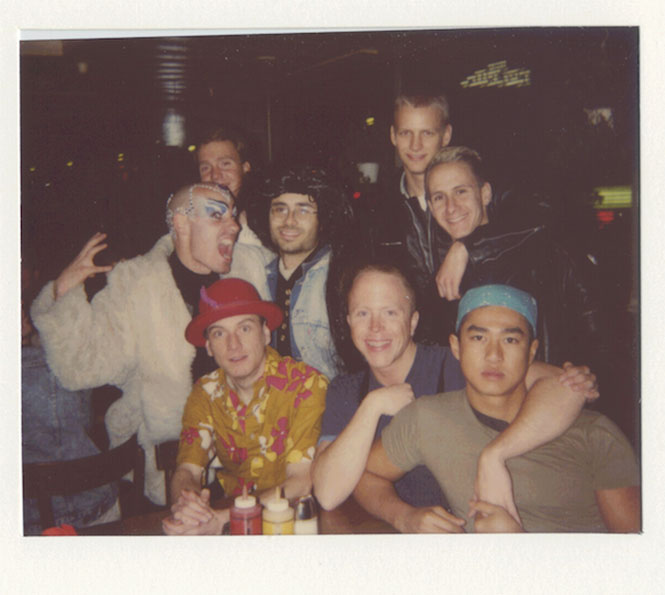 Bob Thornton, co-owner of The Cinch, said, "I remember Polly very well! I have a collection of about 20 that she took in The Cinch. She was in and out for years, it seemed. I remember there was a lot of speculation about who she was when she wasn't Polly."

I asked Coy Meza, who was around Polk Street at the time, and who has some Polly Polaroid photos as well, if he had heard any of the speculation.

He responded, "The rumor that went around is that she had a gay son who died from AIDS and this was her way of keeping his energy alive. I heard this story a few times."

Juanita More host, DJ and activist, said, "I am pretty sure she took a picture of a friend and me at the Fairmont [Hotel] sometime around 1983. We were there seeing Peggy Lee perform. That is my only recollection." The Peggy Lee concert at the Venetian Room of the Fairmont was on October 14, 1984. 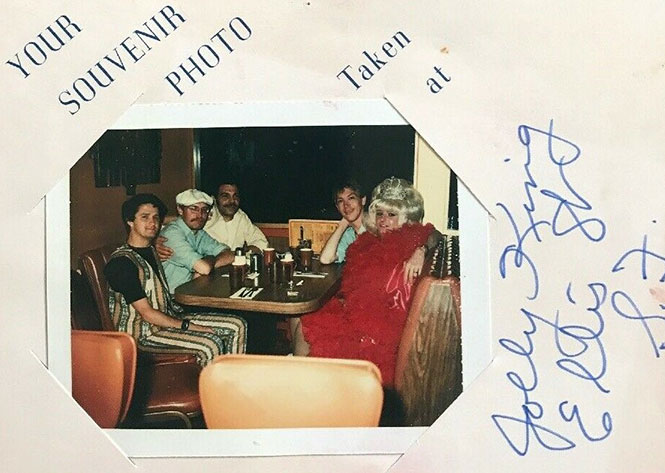 A Polly Polaroid portrait at Jolly King Restaurant, circa 1976, framed in her signature packaging specifying the event at which it was taken.

Photographic memory
Polly caught the particular attention of other photographers like Jim James, who remembered her well.
"She used to especially hang out at the P.S. Bar on Polk," said James. "I did not get to know her that well. She was a bit shy. [She was] a tiny wispy old gal with a squeaky, crackly voice. But she always managed to ask every person at least once if they would like their Polaroid taken."

I asked James if it was a cash-only business and he responded, "Yes, cash only. I think she wanted from 5 to 7 dollars for two." James remembered Polly taking a photo of him with his soon to be ex-boyfriend one Thanksgiving at the P.S.

It was finally another photographer, Dan Nicoletta, who helped me solve the mystery of Polly Polaroid. Nicoletta remembered her throughout the city, and had particular memories of the evening of February 16, 1994.

That night was the stag party for Miss X, former member (with Miss Tippi and Doris Fish) of Sluts A Go-Go. The evening began at a roller rink and continued with a bar crawl up Polk Street which ended at the Giraffe (1131 Polk Street).

Nicoletta took several photos at the event, including ones of Polly Polaroid. And in the envelope with his photos was a card with Polly's phone number. A reverse number lookup revealed Polly Polaroid's identity, and genealogical databases told the rest of the story.

Polly Polaroid was the assumed name of Lenore Ricci, who was born on Feb 14, 1919. Lenore's maiden name was Rogers (though she also went by Brown, her step-father's name). She was originally from Walworth, Minnesota. She moved to San Francisco in 1944 and married fellow Minnesotan Edward Ricci, who immediately thereafter went to war in the Pacific. He died in the war shortly thereafter. She was living at 350 Grove at the time of his death. 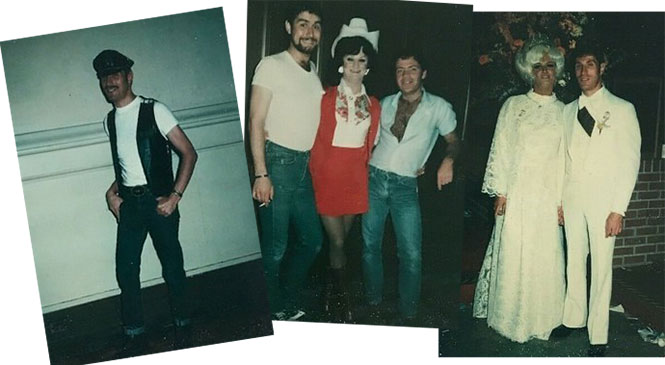 Ricci went to San Francisco State University in the 1950s and while there was a sports photographer for the Gators. For a while in the '60s she was an Avon Lady, which may be where she gained her marketing skills. She moved to the 900 block of Franklin in the '70s, where she continued to live till she left San Francisco (around 1995). She died in Fargo, North Dakota on October 11, 2008. 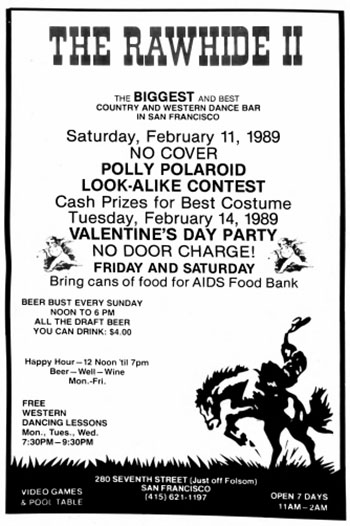 In answer to the rumors, there was no son. Ricci apparently just enjoyed the atmosphere of the gay bars of San Francisco and had a lively cash-only business of taking photographs in the bars.

In her time here, she was celebrated: there was a Polly Polaroid lookalike contest at Rawhide II in 1989. Her photos are from all over gay San Francisco of the time: the QT, Kimo's, the P.S., Church Street Station, the original Hamburger Mary's and Julie's Supper Club.

Her story is one of the great stories of a bygone era of San Francisco, of wild times at the bars on Polk Street. I look forward to the day when some ambitious curator gathers her work for an exhibition. On her memorial site there is a memory from one of her caregivers which says that she was a unique lady who had very interesting stories.

One can only imagine the stories that caregiver heard.