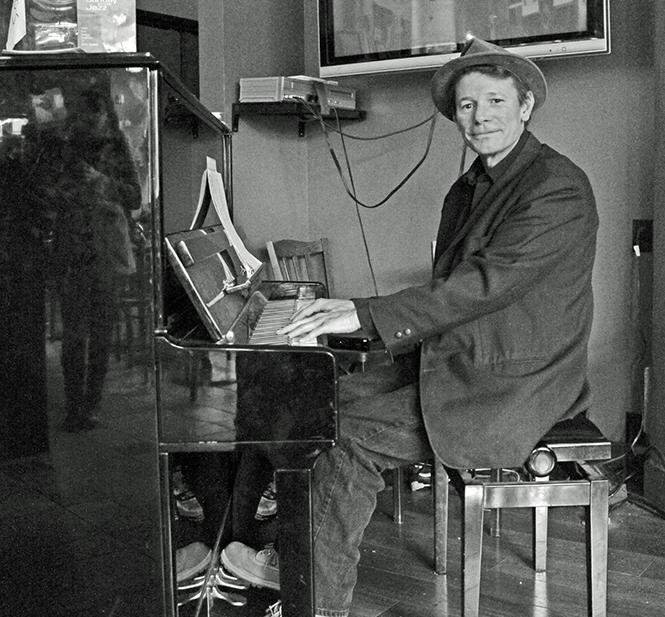 Tim Lewis has been making music and defining the visual landscape of San Francisco for over forty years. There have been peaks during this period when he was playing as many as three gigs a night, and lows where it has been weeks before performances.

For someone who has had a Zelig-like quality to his participation —appearing with the likes of the Sisters of Perpetual Indulgence and Joan Jett Blakk and at venues from Josie's to Buckley's and the Plush Room— he maintains a charming and refreshing self-effacing quality not often found in performers. 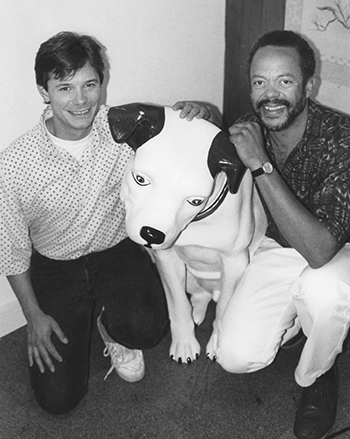 Tim Lewis at Wahlberg Studios in San Francisco with Kelly Houston and an RCA dog statue, in 1991.

Though Lewis was born in Palo Alto, he grew up in Santa Barbara and didn't return to San Francisco until 1975, when he attended Lone Mountain College. There, he began his graphics career while working for The Lone Mountain Gazette. It was through the newspaper that he met his lifelong friend Cass Brayton, who worked for Anderson Graphics, the newspaper's typesetter. Brayton would come to the attention of the general public later as Sister Mary Media of the Sisters of Perpetual Indulgence.

Lewis' performance career begins in San Francisco at the Gay Community Center at 32 Page Street in 1978 or '79. He had been playing since age 5 and was largely self-taught. A big inspiration came when he was a teen.

"When I was 15, I worked at a carpet store and through them inherited a bunch of 78s and sheet music," said Lewis in an interview with the Bay Area Reporter. "It included Nat King Cole, Billie Holliday and Dinah Washington. I wouldn't be playing piano now if I hadn't gotten it. I didn't know about Black music till then. While friends were listening to the Beatles, I was looking for Ella Fitzgerald records." 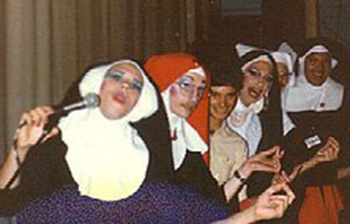 Graphic design allowed Lewis to indulge his passion for playing music, which never paid the bills.

Lewis' first stint on piano with the Sisters was on May 1, 1982 for the Red Party at the Russian Center. The Sisters were responding to Mayor Feinstein's comment, "When I see the Sisters, I just see red!"

Unfortunately the woman managing the center was the daughter of a general in the Czar's army and failed to see the humor in red banners and hammers and sickles. It was a memorable first event, but not the last. 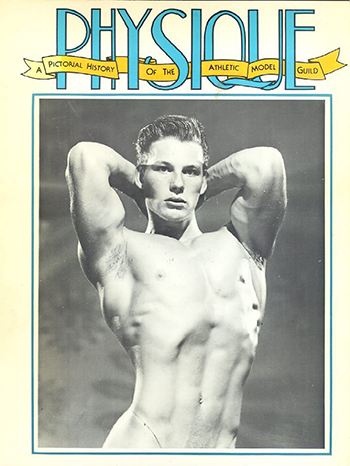 Lewis accompanied the Sisters on the main stage at the International Lesbian & Gay Freedom Day Parade in 1983, and at the Miss Haight Ashbury contest at the Great American Music Hall in 1987. His collaboration with Sister Mary Media was a fruitful one, with Lewis wearing an altar boy costume for some of the events.

His first taste of performing as a cabaret musician came courtesy of Frank Banks at The Mint in 1985. He would hang out with Banks (whom he considers a mentor as well as a friend) after the bar closed, playing music and singing with other patrons. Later, when Banks became ill in the early '90s, Lewis was one of his caregivers and performed at his memorial at the White Swallow (1750 Polk St.) on Valentine's Day 1993.

The Mint gave Lewis the cabaret bug. After playing there, he accompanied Mitch Bandanza at Buckley's (131 Gough St.) in 1986 and then performed at the Blue Lamp (561 Geary) in the late '80s with a jazz quartet for many weeks. 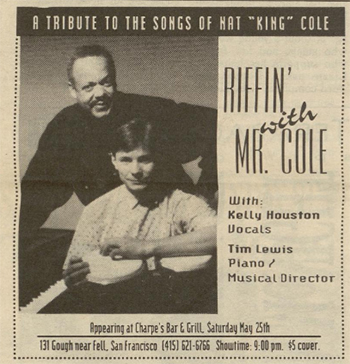 In June 1991, when Buckley's became Charpe's, he did the revue Riffin' With Mr. Cole: A Tribute to Nat King Cole with vocalist Kelly Houston. He moved the Cole tribute to Mason Street Wine Bar (342 Mason St.), where it continued through September.

In 1993, he returned to Mason Street with another review, Love Songs and Other Nonsense. He also played at the Phone Booth (1398 South Van Ness) in the '90s and in 1994 played piano for Late Nite With Joan Jett Blakk at Josie's Cabaret (3583 16th St.). His musical work dovetailed nicely with his graphic work: he did posters for Josie's, receiving encouragement from Josie's' co-owner Donald Montwill.

Lewis' performance career continued into the 2000s, with more than a year at the original Lush Lounge (1092 Post St.), when it was a piano bar. While playing at the Lush Lounge he also performed at Mayes Oyster House (1233 Polk St.) and would move from one venue to the other with his audience.

He played show tunes and accompanied Donna Sachet at the Plush Room (940 Sutter St.) for her annual Songs of the Season in 2000. One long-term performance spot for him during this period was Café Trieste (1667 Market St.) where he performed two nights a week for three and half years. Later in that run he was accompanied with bassist Kaeli Earle. In 2012 he performed with the Donovan Plant Band at the Red Devil Lounge (1695 Polk St.). 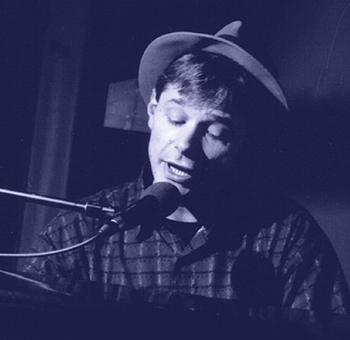 What is significant about Lewis' performance history, aside from his love of music and his drive to perform, is plain from the list of venues he performed at: The Red Devil Lounge, Café Trieste on Market, Josie's and many of the rest are gone. His career parallels a shrinking of venues for live music in the city, and a corresponding shrinking of cabaret spaces. Though Lewis continued to perform at private parties many of the public venues just disappeared.

His graphic art, however, is still quite apparent. His latest work was the cover for Marc Huestis' book Impresario of Castro Street: An Intimate Showbiz Memoir, which was published last summer.

Aside from the work itself, what is impressive about Tim Lewis' life in San Francisco is that he has been able to use his talents in an impressive do-it-yourself style to put together a career. Tim Lewis serves as an example that stands the test of time. Perhaps what is past can once again be prologue.