Harry Partch at Opus: How the iconoclastic composer performed at a 1950s San Francisco gay bar 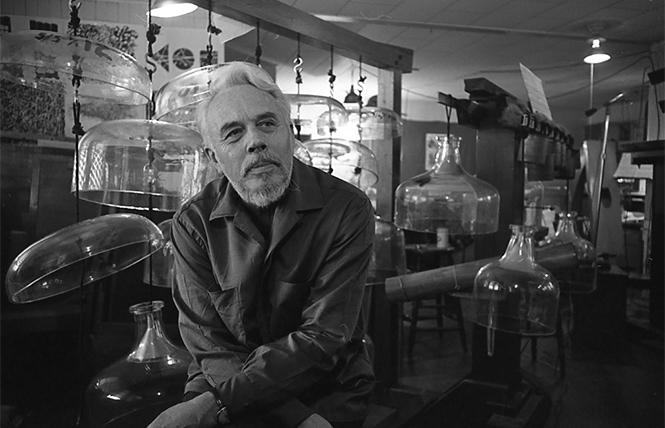 Harry Partch with his instruments, including Cloud Chamber Bowls, in his studio in Petaluma, 1964, courtesy Corporeal Meadows

When stories of gay life in 1950s San Francisco get told, Harry Partch does not feature prominently. This may be because Partch is an iconoclastic figure in many respects other than his sexuality.

By the 1930s he had already rejected the twelve-note octave —which was the basis for Western music— and was developing a microtonal scale that would eventually have 43 notes to an octave.

In order to play his music he created his own musical instruments, many of which repurposed other materials. When he returned from Europe during the Great Depression, he took to the rails and lived the life of a hobo for almost a decade. 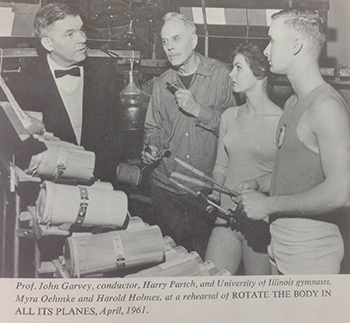 Harry Partch at University of Illinois Urbana-Champaign at a rehearsal of his work "Rotate the Body in All its Planes," 1963, BMI catalog, 1968; courtesy San Francisco Public Library

On the list of things that made Partch unique, sexuality is admittedly a minor factor. I was surprised, therefore, to find out that in 1954 he had given two talks on his music at Opus One, which was both a classical music bar and gay bar in North Beach.

Partch moved to Gualala in Mendocino County in 1947 from Madison, Wisconsin. In Wisconsin, he lectured at the University and wrote Genesis of a Music, a book that explained his musical theories. In 1950, the musician Ben Johnston moved to Gualala with his wife to study with Partch. Johnston also brought along his friend Donald Pippin, who had just received a degree from Harvard. Pippin would go on to open Opus One.

Pocketful of Wry
Partch had been living as a gay man for decades by the 1950s. Harry Partch: a Biography by Bob Gilmore reveals that he had a relationship with silent film star Ramon Novarro in the early 1920s (which ended with Novarro's success in films). In Partch's Bitter Music, which chronicles his life as a hobo, he talks about sexuality in the hobo camps in 1935:

"If the homosexuality in prisons, navies and in any other circumstances which segregate men is similar to tendencies as I have seen in this camp, it is mostly pure lust. Few of these men desire tender affection. A female sheep would often prove satisfactory." 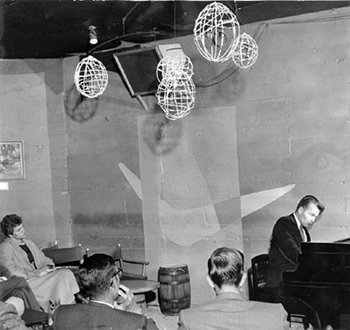 Pippin was also aware of his sexuality, but was less forthright about it. In an oral history from the Bancroft Library's Oral History Center entitled A Pocketful of Wry: An Impresario's Life in San Francisco and the History of the Pocket Opera, 1950s-2001, he relates how he felt about his sexuality when he was in college in the 1940s:

"I had acknowledged to myself that I was homosexual, but I had not, nor would have dreamed of acknowledging it to anyone else."

This is not to suggest that Partch and Pippin had a relationship. When they met, Partch was more interested in Johnston, who relates in Gilmore's biography that Partch had a "pipe dream that I might become his lover," before Johnston arrived in Gualala with his wife.

As for Pippin, the biography relates that Partch found him "prim."

From Gualala, Partch moved to Oakland, where in April 1951 he worked on King Oedipus. The work used texts from William Butler Yeats and was performed at Mills College from March 14 - 16, 1952. It garnered widespread press coverage in the Bay Area and national coverage by magazines such as Time. 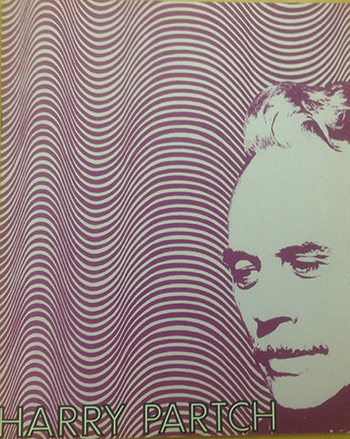 Partch's personal life was chaotic; by January 1953 he was living in his Studebaker on the streets of Sausalito. The artist Gordon Onslow Ford arranged for him to move into a building at Gate 5 of the Sausalito shipyards, which was large enough to house his instruments. The group that performed his music there was named the Gate 5 Ensemble and his self-produced records were distributed from here on the Gate 5 label.

A growing reputation
Partch's reputation in the Bay Area continued to grow during this period. He had a series of lectures broadcast on KPFA. On November 19, 1953, the radio station sponsored a performance of his instrumental work Plectra and Percussion Dances at the International House in Berkeley. In February 1954 the radio station broadcast a demonstration of his instruments at a Young People's Concert in Mill Valley.

Donald Pippin, meanwhile, moved to San Francisco and in 1951 began playing piano five nights a week at the hungry i, which was in the basement of 141 Columbus (Columbus Tower).

In 1954, Enrico Banducci moved the hungry i to a new location, but was obligated by lease to keep the spot on Columbus, so he let Pippin open Opus One there for a low rent. 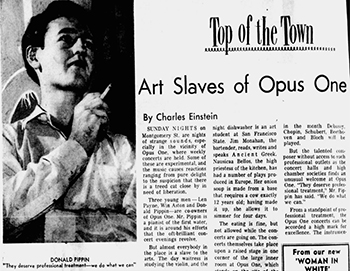 Pippin discusses how Harry Partch came to play there on July 25 and Aug. 1, 1954 in the Bancroft oral history:

"One of our first concerts presented Harry Partch— Harry grumbling, as usual.

"How can I give a concert? I can't bring my instruments down. All I can bring is some records." I said,

"That's quite enough. People have so little chance to hear your music."

So Harry consented to do two performances, both of which were packed to the gills, despite the unprecedented dollar admission charge—all of which went to Harry. He definitely had an enthusiastic following, and of course deservedly so. He spoke and played records, and because he was an excellent speaker and an arresting presence, not to mention the rare opportunity to hear his music, I'm sure that his audience was well satisfied."

Opus and closed
A question remained for me regarding Opus One: was it really a gay bar? The bar was featured in the Chronicle often, where it was referred to as a classical music venue that was "unique," "unusual" and "European."

Aside from these coded terms, the bar seemed to pass at a time when other gay bars were being put out of business. There is a reference to the bar in the 1960 convention papers of the Daughters of Bilitis, as a gay bar with classical music, but no other contemporary gay references. The only mention of police in relation to the bar is a 1957 mention in a San Francisco Chronicle column, saying the police heard piano playing in the club after hours and discovered Pippin practicing Beethoven. They stayed through two movements. 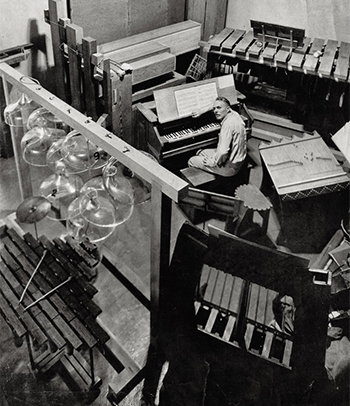 Harry Partch at Mills College in 1952 surrounded by his instruments while preparing for "King Oedipus" in 1952; courtesy of Corporeal Meadows

I asked the poet Lewis Ellingham, who moved to San Francisco in 1954, if he went to the bar and if it was gay.

"Yes, it was my hangout," Ellingham replied. "I lived for a while in Berkeley and came over every weekend to 'hang' there. The owners were Win Aston and Don Pippin, both gay. Sunday nights there were Pippin's concerts, the crowd mainly musical with many gays; otherwise it was all gay all the time. As I recall it wasn't open in the daytime, at night until 2 a.m., beer and wine. We all socialized a lot; I met a lover there."

And though he didn't attend the Partch concerts, he did know Partch.

"I spent a night on Harry Partch's houseboat in Sausalito and vaguely remember him talking into the dawn. We must have come from the Opus One, but I was so drunk I have no clear impressions."

Partch remained in the Bay Area till 1956, and would return to California in 1962 and live here until his death in 1974.

His reputation continues to grow posthumously. A performance using his instruments takes place this month at the University of Washington.

Pippin went on to perform classical music at the Old Spaghetti Factory after Opus One closed in 1961 and would achieve greater fame as the founder of the Pocket Opera in 1978.


The author thanks the Bancroft Library for quotations from: 'Donald Pippin, A Pocketful of Wry: An Impresario's Life in San Francisco and the History of the Pocket Opera, 1950s-2001,' an oral history conducted in 1996 and 1997 by Caroline C. Crawford, Oral History Center, The Bancroft Library, University of California, Berkeley, 2001 and to Corporeal Meadows (www.corporealmeadows.com), the online home of Harry Partch information for use of their photos.