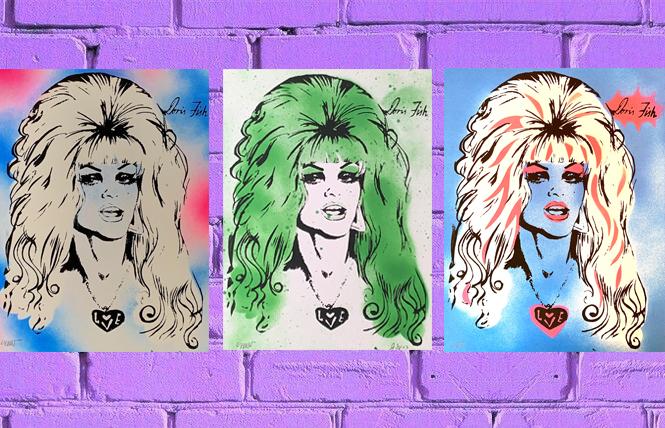 Found treasure that tells the tale of personal history is a story that has been repeated many times. The documentary Finding Vivian Maier tells the story of how her lifelong passion for photography was discovered after Maier's death.

Closer to home, Justin Spring discovered the papers of Samuel Steward in a San Francisco attic, and newspaper truck driver Alan Perry discovered the letters of artist Leo Stillwell to dancer Russell Hartley in a dumpster on Duboce Street.

Another story can now be added to the list.

In the summer of 2007, longtime San Francisco resident Daniel Detorie was walking on the 300 block of South Van Ness when he came across a box on the street. Contained in the box were silkscreens that had been used to create posters from the Doris Fish and Sluts A-Go-Go show Blonde Sin.

Detorie had seen Doris Fish in performance in the 1980s and immediately recognized what the screens were. He had the prints for a few months before giving them to the artists Jim Winters and Michael Wertz, who used them at the Castro Street Fair that year.

Before discussing the use of the prints at the Fair, it's important to understand why they, and Doris, are important.

Doris Fish was the stage name for Philip Mills, who came to the U.S. from Australia in 1976. In 1972, Doris took his name from Doris Day and a cat named Lillian Fish. The summer he came to the U.S. he entered The Tubes' Talent Hunt, which took place at The Boarding House (960 Bush Street) on August 8, 1976.

The Tubes had a series of talent contests that year and in San Francisco the contest ended in a tie, with Doris Fish winning alongside Pearl E. Gates. Gates would go on to become a backup singer with Jane Dornacker's group Lelia and the Snakes, and later start her own group Pearl Harbor and the Explosions. 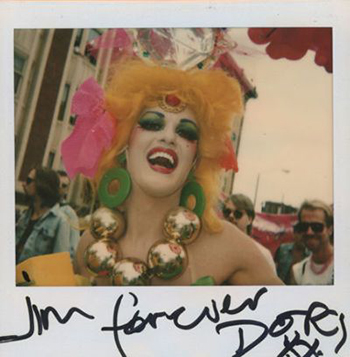 Doris Fish at SF Pride in a Polaroid by an unknown photographer.

Both Gates and Fish met Dornacker in the summer of 1976, as at the time she was a songwriter and performer with The Tubes.

By 1979 Doris Fish, Tippi and Miss X were performing Sluts A Go-Go, which would, within the next year, evolve into the play Blonde Sin. In a 1989 SF Sentinel column, 'The Doris Decade,' Fish gave his take on the performance:

"Nineteen Eighty was our first foray into legitimate theater, though just on the very edge. We wrote a play with music called Blonde Sin, which was a gritty fantasy about showgirls making it on a Bob Hope USO Tour of Afghanistan. Our first review said, 'Not Bad Enough.' As I think about it, I'm surprised and delighted the little show was. What is really astounding is that we did 16 costume changes each, in the ladies' toilet of the Hotel Utah! Sister Boom Boom started her drag career in that show, donning the guise of a Russian 'defective showgirl,' a role later rewritten for the enormous talents of the late Jane Dornacker." 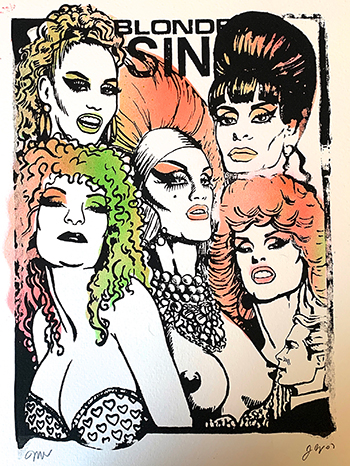 Poster for the play Blonde Sin, which was performed at Hotel Utah.

That first review, which said "Not Bad Enough," was from the September 11, 1980 Bay Area Reporter. The writer, Mark Tompkin, had a suggestion for those attending:

"The Hotel Utah showroom is very small, so reservations are suggested. So is a massive dose of your favorite hallucinogen."

Although the reviews may not have been favorable, the play was a hit. It ran from September 1980 to April 1981. Tim Spence, who was the musical director of Blonde Sin, told me:

"Blonde Sin was very popular. Hotel Utah was really small. You could only fit at most 81 people into the room. After New Year's Eve (when Jane Dornacker joined the cast) it was even more popular. People would come more than once. Jane was a seasoned performer and was very popular. Doris liked that Jane was bigger and taller than she was."

Asked for further memories about the event he said, "Eddie Troia, who was the manager of Leila and the Snakes, should really be mentioned, because he was the director and was responsible for getting all of the people in Blonde Sin together. And Greg Foss, who was later in Vegas In Space, was one of the people who came to the performance multiple times." 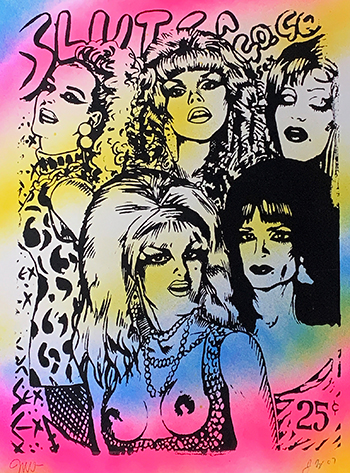 One of the reasons that Blonde Sin was popular was because of the marketing of the show. There were no ads in the B.A.R, Sentinel or Bay Guardian for the play. What made the play popular was word of mouth — and some of the things that created the word of mouth were the very silkscreen prints that Daniel Detorie found.

In researching this article, I found several art sites online that were selling copies of the original posters that had long ago been plastered all over South of Market by Doris and company during the run of the play. There was a D.I.Y. sensibility to the art, the play and the marketing, which were typical both of the gay scene and the punk scene in the late '70s and early '80s.

Once the silkscreens were rediscovered, Detorie gave them to his friends, the artists Jim Winters and Michael Wertz, who were fans of Doris Fish.

Concerning the project, Jim Winters wrote, "Michael and I made prints from them —they were still in usable shape— and sold them at Sugar Valley at the Castro Street Fair along with some other Doris Fish/Vegas In Space stuff that we got from Philip R. Ford. The remaining prints and the screens we gave to the GLBT Historical Society." 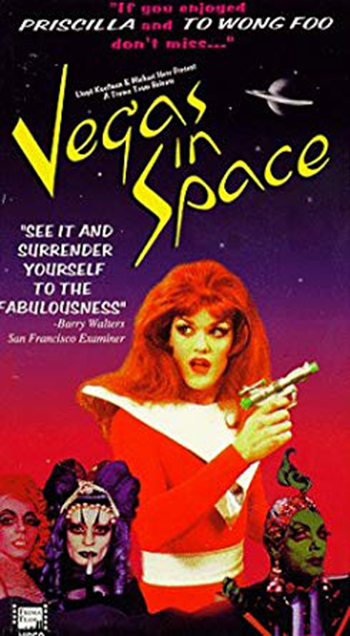 The cult classic Vegas in Space.

Michael Wertz added, "We sold the prints in 2007 as part of Sugar Valley, the street-fair-within-a-street fair during the Castro Street Fair created and curated by Flower Frankenstein. Sugar Valley is an amazing story in its own right. I believe we ran Sugar Valley for five years."

Years later, Wertz made prints for 25th anniversary of Vegas in Space.

There is still a central mystery to the story of the prints, which is how they came to be on the 300 block of South Van Ness 16 years after the deaths of both Doris Fish and Tippi. There is also a message for all of us who have materials we want preserved: make certain to put someone in charge of those materials or leave written instructions.

The spirit of Doris Fish, who inspired such artistic chaos in the '80s, returned once again last decade for another encore.


The author would like to thank Michael Johnstone, Tim Spence, Michael Wertz and Jim Winters.