Finding Fe-Be's - Rediscovering the history of an iconic bar 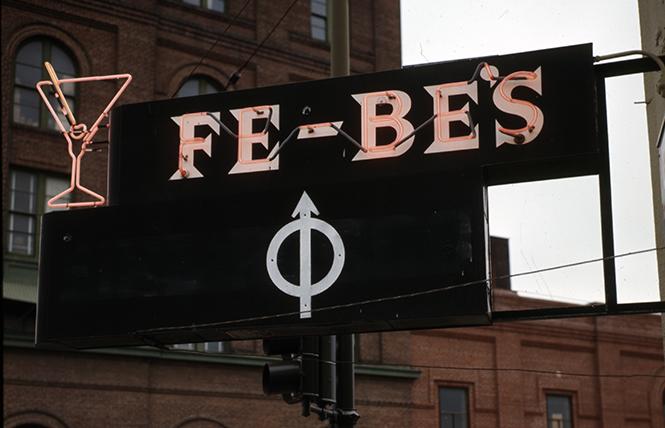 One thing about Fe-Be's that most people know it is that it was the first leather bar on Folsom Street. If there is a second thing people know, it's that the bar was the place that the iconic "Leather David" was born - and generally that's where their knowledge stops.

In his book, Gay San Francisco: Eyewitness Drummer - A Memoir of the Sex, Art, Salon, Pop Culture War, and Gay History of Drummer Magazine - The Titanic 1970s to 1999, Jack Fritscher quotes the creator of the "Leather David," artist Mike Caffee, as saying: "Fe-Be's is long gone and mostly forgotten—only the statue lives on." 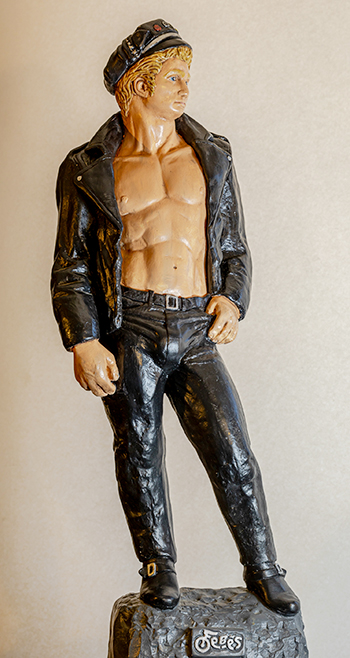 The bar, which opened at 1501 Folsom Street on July 26, 1966, deserves to be remembered for more than the statue, despite its iconic nature. It was a home to outlaw gay bikers, owners Don Geist and John Kissinger, who fought the law.

Fe-Be's was also the first location of A Taste of Leather, where owner Nick O'Demus sold poppers and 'napkin rings' for the needs of the bikers in the bar. It was also home to bartender and Emperor II Russ Higginbotham and much socializing by members of the Imperial Council of San Francisco.

"In L.A. Griffin's West and Fe-Be's up here became the headquarters for most of the club scene. The Warlocks met the first Friday of every month in a little garage at 33 Gilbert Street.

And at that time, Don Geist and John Kissinger were the owners of Fe-Be's and they would come to these meetings and hand out drink tickets. That's how the clubs got to go to Fe-Be's and establish that as their local place to meet — because of Don and John giving out free drink tickets — and they got the crowd."

As you can probably imagine, these men did more than just polish their bikes while they were at the bar. Ron Williams, author of San Francisco's Native "Sissy" Son, remembered the bar this way:

"I spent a lot of time in that bar during the late '60s and early '70s. On Sunday afternoons Fe-Be's was especially busy. Being just down the street from The Stud there was a lot of activity, in the back, 'crushed fruit' is a better description. The hanky-panky was so blatant, groping and guys with the dicks out BJs going on. You could buy Poppers from Nick O'Demus from Taste of Leather up in the attic over the bar."

The sexual activity at Fe-Be's did not go unnoticed by authorities. The Alcoholic Beverage Control held hearings on September 18 and 19 in 1967 and May 27, 1968 over two counts against the bar: running a business contrary to public morals (11 instances were cited) and distributing obscene matter. The behavior leading to the counts happened between September 1, 1966 and June 1, 1967. The ABC began surveilling the bar less than two months after it opened.

The document that I found at San Francisco Public Library concerning this was an appeals board hearing (AB-3150) from January 6, 1969. The "behavior contrary to public morals" included the following:

The ABC wanted Fe-Be's' license to be revoked and the bar to be closed, but the community rallied behind them. From October 1970 through October 22, 1971 the bar was closed. The Adz Gayzette posted notices of hearings and ads for a legal fund benefit with performers Michelle and Jose at the Roundup (298 6th Street). 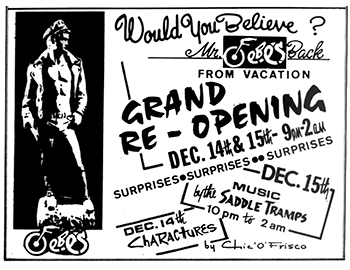 Other benefits happened at Off the Levee (527 Bryant) and the Inn-B-Tween (1347 Folsom). The fifth anniversary party was held in exile at the Corner, at 15th and Folsom. The first issue of the Bay Area Reporter (April 1, 1971) listed Fe-Be's as a member of the Tavern Guild "on vacation."

In the midst of the ABC drama, Geist and Kissinger celebrated their 25th anniversary as a couple. They originally met in a laundromat in St. Louis, Missouri while both were under 21 and in the Navy. The anniversary party was a black-tie dinner party at the Jack Tar Hotel with hundreds of guests.

Mr. Marcus remembered that they gave Jose a blank check for the event and said, "Plan the party. Invite the guests and let's celebrate." It was memorable for another reason: 10 years later they not only celebrated their 35th anniversary, but the 10th anniversary of the addition of Doug Anderson to their menage.

It's unclear what the ultimate resolution of the case was, but we have hints. 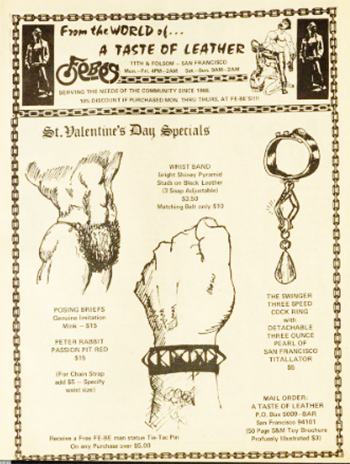 A mid-1970s Taste of Leather ad in the Bay Area Reporter.

When the bar reopened, the ad in the Adz Gayzette said it was "under new management." When Fe-Be's bartender was elected Emperor Russ II in September 1973, an article in the B.A.R. referred to him as the "licensed owner of Fe-Be's."

It was a common practice during the period for bar owners to name a relative or employee as the new owner of the bar to keep it open.

Fe-be's continued to inspire the community into the '80s. The Mr. Febe's contest was the first leather contest with a title. Emperor XIV Matthew Brown told me that Geist, Kissinger, Higginbotham and Anderson were involved with the Imperial Council for as long as they were in San Francisco.

Fe-Be's also continued to be involved with the motorcycle clubs with events like the Interclub Fund's Casualty Capers and their own Valentine's Day Massacre. They welcomed members of all clubs as well as independents.

A Taste of Leather remained in Fe-Be's until 1978, when it moved to 960 Folsom Street. It continued to offer S&M Black and Blue Stamps with purchases, including the "Leather David" statue and "napkin rings." When the bar closed on June 12, 1986 it was Geist, Kissinger and Anderson who made the decision — not the ABC.

Connor attributed the closure to fear of AIDS, but as there were many benefits there in the early days of the epidemic I would guess burnout played an equal role. John, Don and Doug moved close to Biloxi, MS in 1986. John died in 1988, Don in 1998, Russ in 2015 and Doug in 2016.

In his tribute to Fe-Be's when it closed, Mr. Marcus wrote, "While they never said anything about it, Don and John gave so much money to charities it was unbelievable."

In the end they were as iconic as the statue.