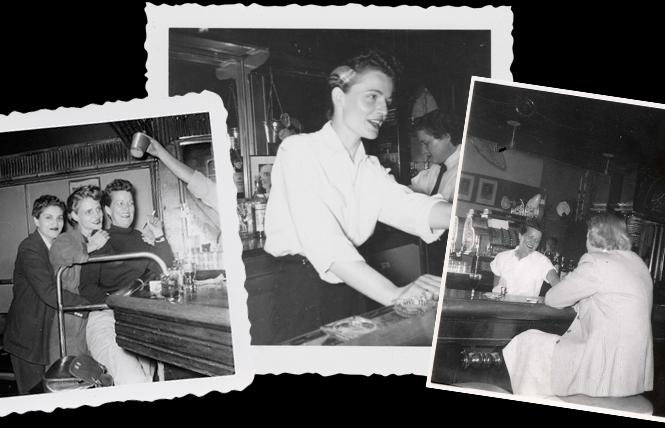 Paranoia, red-baiting and homophobia swept across the United States in the early 1950s like a cold fire, and San Francisco was not exempt from its reach. The vile Joseph McCarthy and his venomous toady Roy Cohn engaged the country in the Army-McCarthy hearings in 1954, the same year the hysteria broke out here.

On September 8, 1954 the San Francisco Police raided Tommy's Place for serving underage girls and arrested three people related to the raid. Two, Grace Miller and Joyce van der Veer, were owners of the bar (their names were on the liquor license, which allowed them to be bartenders) and a third, Jesse J. Winston, was charged with contributing to the delinquency of minors, giving narcotics to minors and possessing narcotics.

The case captured news headlines for months with the San Francisco Chronicle kicking off the coverage with a screaming headline "S. F. Teen-Age Girls Tell of 'Vice Academy'" on September 10. The trials of Miller, van der Veer and Winston captured headlines into 1955 and cast a chill across the gay and lesbian community that arguably lasted for years. 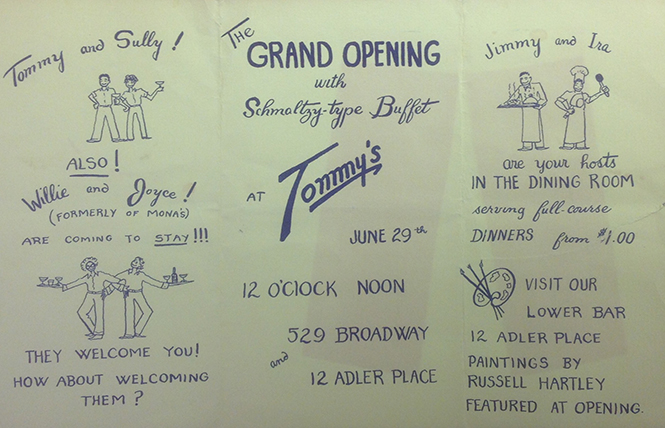 Throughout the trials, articles with titles like "Tommy's Bar Called Perverts' Haven" appeared in the press. In a scene reminiscent of Lillian Hellman's The Children's Hour, the Chronicle reported on a girl's testimony on the stand:

"A friend (a 17-year-old) said we should go there because it was 'gay.'
And what did 'gay' mean to you.
'It meant homosexual, 'the girl said almost inaudibly."

Ultimately the trials of the three people arrested delivered quite mixed results. Van der Veer was acquitted on contributing to the delinquency of minors on Dec. 2, which enraged the PTA.

PTA groups from around the bay area subsequently went after Tommy's liquor license after the acquittal (they succeeded — the bar closed by 1955). Jesse Winston was convicted on all four counts and sentenced for one to twenty years in San Quentin.

Miller was convicted of serving beer to minors and sentenced to six months in county jail.
Along with the hysteria related to drugs and homosexuality in the case, it is impossible to avoid the obvious racism in the case. Winston was the sole African-American charged. Throughout the trial papers such as the Chronicle used lines like, "The blue-eyed young witness said she met Winston at the bistro about two years ago."

It's particularly gratifying that Katie Gilmartin, author of the noir mystery Blackmail, My Love will host a walking tour based on the events surrounding the raid at Tommy's Place.

"Thrill Spot: A Lost Queer History Walking Tour" happens May 19 at 2pm. Gilmartin will also host a talk, "Thrill Spot: The Raid on Tommy's Place," at the GLBT Historical Museum on June 13 at 7pm. 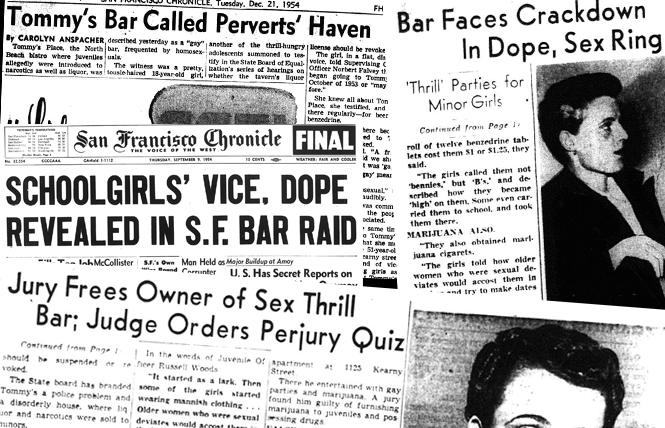 Gilmartin, who is writing a work-in-progress based on the raid at Tommy's, is the perfect person to bring this episode to light. Her Blackmail, My Love was based in 1951 San Francisco. The noir thriller follows a cross-dressing female detective who is investigating the case of her missing brother (who has disappeared into the gay demimonde of San Francisco). That mystery was an engaging romp, which shows real promise for her take on the story of the raid on Tommy's.

I spoke with Gilmartin about the upcoming walking tour and asked whether it was going to feature Tommy Vasu, the dynamic entrepreneur who gave Tommy's Place its name.

"This walking tour isn't going to be about Tommy," she said. "This particular tour will focus on the experience of one of the bartenders who was arrested, Joyce van de Veer."

I also asked whether the acquittal of Van de Veer and the six-month sentence of Miller were seen as being a successful defense of the case.

"My sense of things is that six months was an extraordinarily harsh sentence for something that happened routinely all over town," said Gilmartin, "to the point that there were newspaper articles about how easy it was to get a good-looking fake ID for $7. They weren't on trial for serving underage girls. They were on trial for being lesbians, really: and one of them went to jail for six months for it.

"Both Joyce and Grace were deeply traumatized by the whole experience in ways that affected them for life. I'd like to read this story as inspirational, and there are aspects of it that are. But overall that's not what I come away from it with, much as I'd like to, and much as I went into the research and writing expecting to."

I further pressed as to whether or not Van de Veer and Miller viewed themselves as being heroic or celebrated for fighting back.

"You are absolutely right that it is extraordinary that Joyce was acquitted," said Gilmartin. But knowing that in the last few years of her life she still feared that the SF police might track her down — and that she burned photographs fearing that they would incriminate her (she was a photographer, they were precious to her and would be to us, historically) — that makes it hard for me to view the raid and its aftermath as a celebratory event.

"I guess, most of all what makes it not that for me: that neither Joyce nor Grace came to see it that way, to see themselves as heroes. I so wish that they could have. But they simply did not have access to that perspective, in their lifetimes. That frames it for me."

What makes Gilmartin's research and her telling of the story so vital is that she interviewed friends of both Miller and Van der Veer. This personal touch obviously informs her work in a way that resonates when she discusses the case.

Sex Panic
The reach of the hysteria that spread across the United States continued beyond San Francisco. In 1955, sex panics connected to homosexuality erupted in Boise, Idaho and Sioux City, Iowa. In Idaho, 15 men were convicted and sentenced to terms that ranged from probation to life in prison. In Sioux City, 20 men were arrested and sentenced to a mental institution "until cured."

The horror from this era has informed several works, including film adaptations of the stage play The Children's Hour (1961) and Allen Drury's 1959 novel Advise and Consent.

We are fortunate to have the story of Tommy's Place in the capable hands of Gilmartin. Both the upcoming walking tour and lecture will shed light on an era of San Francisco history that has too often been forgotten. She is compassionately breathing life into the stories of Grace Miller and Joyce Van der Veer. They remain true heroes to me, as true heroes are not always successful and do not always survive intact.