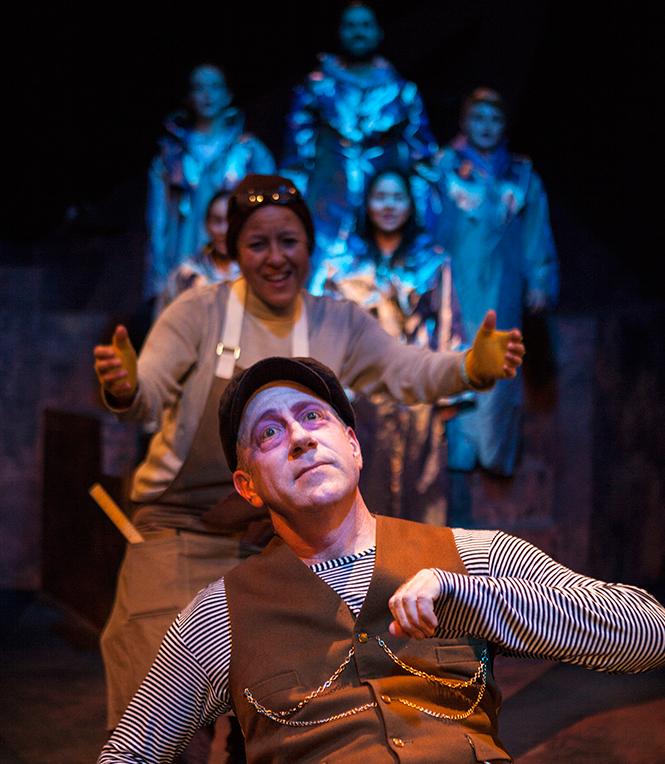 Oh, the irony. There's a terrific 45-minute show to be excavated from the two hours of material in "Time Sensitive," a good-humored takedown of contemporary capitalism's devotion to acceleration. Presented by Ragged Wing Ensemble at the Flight Time black-box theater in downtown Oakland, the performance piece, written and directed by Amy Sass, is at its best in snappily choreographed ensemble pieces: a phalanx of office workers marching in lockstep as their fingers fly over invisible keyboards, chanting, "Eat. Shit. Work. Fuck"; a cabal of caffeine fiends placing orders at Starbucks in rat-a-tat rhythm; a swarm of morticians promoting the snarkily overefficient notion of life as "a drive-thru funeral parlor."

These routines take aim at easy targets, but that's not a problem because the targets are worthy and the shooting style unique. Evocative, staccato movement combines with wordplay delivered at such a rapid clip that Dad jokes alchemize into poetry. The notion of "a full plate" is visually rendered by workers carrying teetering towers of dishes. An office manager tells her crew that "we must be informed in advance of unplanned events."

Interspersed with these large numbers, though, are smaller, slower vignettes in which the dozen-member cast breaks into smaller groups and takes on recurrent characters in a loose, impressionistic plot that's sort of cross between Fritz Lang's "Metropolis" and "Pinocchio." One of these recurrent bits is particularly resonant. Akaina Ghosh plays a businesswoman purchasing the ability to conceive and deliver a baby in a single month so she won't have to miss work. But the bulk of these pieces aren't nearly as successful as the full-ensemble work.

The theme of "Time" isn't rendered specifically or tightly enough to give the whole of the show much backbone. Time is money, time is a lifecycle, time is industrialization, time is a manmade fiction — theme is flabby. Sass' work is crisp when it focuses on the modern urban workplace, but gets diffuse and distended when it drifts into other realms. One fable-like throughline, featuring a terrifically controlled performance by Keith Davis as a robot child, is given far more prominence than it deserves.

Costume designer Lauren Ann Tannous makes her biggest mark with the swooping, silvery robes worn by "Ice Monks" in the show's opening and closing numbers. But the notion of geologic time and the meditative aspect of watching ice melt that these scenes are intended to convey (per the printed program) seem tacked on and excessive.

When "Time Sensitive" is quick on its feet, it's a pleasure. Too often it moves at a glacial pace.