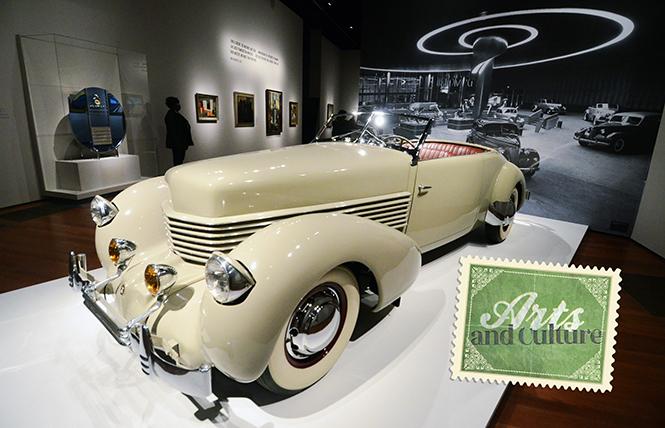 An elegant example of streamline moderne design is the 1937 Cord Phaeton 812 automobile, part of the "Cult of the Machine" exhibit now showing at the 2018 Besties-winning de Young Museum. Photo: Rick Gerharter

It's that time again when your old trusties at the Bay Area Reporter bestow the Besties, the reader's-choice LGBTQ Best of the Bay awards, for 2018. We've tried a new tactic this year, and retired the perpetual winners in some categories in a sort of "Hall of Fame" so that other deserving worthies might prevail. We'll note those "retired" honorees when they come up. To make the presentation more amusing and interactive, this year Out There presents our portion of the awards in a sort of "Mad Libs" format, where you can choose some of the verbiage for the honorifics yourself! Don't worry, all the missing words are furnished at the end of the column.

With that said, here are the results in nine Arts & Culture categories.

("Frequent Besties winner SFMOMA has been retired from the competition.")

"We are an art museum, a vital public space where (1) illuminate the past, speak of the present, and shape the future. Doers, creators, thinkers, (2) of the world - those who eagerly (3) the unfamiliar - you are welcome here." - courtesy de Young Museum/ FAMSF.

("Frequent Besties winner San Francisco Ballet has been retired from the competition.")

"Alonzo King has been called a (1) choreographer, who is altering the way we look at ballet. King calls his works '(2) structures' created by the manipulation of energies that exist in matter through laws, which govern the shapes and movement directions of everything that exists. Named as a choreographer with 'astonishing (3)' by the New York Times, Alonzo King LINES Ballet has been guided by his unique artistic vision since 1982." - courtesy AKLB.

"Home of the San Francisco Symphony since it first opened in 1980, Davies Symphony Hall offers a host of (1) to concertgoers, from in-house (2) and beverage services to behind-the-scenes tours and unique (3) experiences." - courtesy SFS.

"ODC/Dance Company's 10 outstanding dancers perform its (1) repertory for more than 50,000 people annually. In addition to two annual home seasons in San Francisco, Dance Downtown and the beloved holiday production The Velveteen (2), past highlights include numerous appearances at the Joyce Theater in New York, sold out performances at the Kennedy Center, standing room only engagements in Europe and Russia, and two USIA tours to (3)." - courtesy ODC/Dance.

"The California Academy of Sciences is a renowned scientific and educational (1) dedicated to exploring, explaining, and (2) life on Earth. Based in San Francisco's Golden Gate Park, it is home to a world-class aquarium, planetarium, and natural history museum - all under one (3) roof." - courtesy CAS.

("Frequent Besties winner The Fillmore has been retired from the competition.")

"The Warfield is a 2,250-person venue and has been a San Francisco institution for 86 years. Opened on May 13, 1922, it was built by showman and theatre chain owner Marcus Loew, who named the showplace after his old friend David Warfield, a native San Franciscan who began as an (1) and grew to be one of the greatest silent film actors of his time. The Warfield was originally built as a vaudeville and movie palace and became a concert hall in 1979 when Bill Graham Presents booked a two-week run of shows with (2). The esteemed hall has been (3) ever since." - courtesy The Warfield.

"El Rio began her life in 1978 as a leather Brazilian gay bar! Our Papas, Malcolm and Robert, ran things until their retirement when the helm passed to The (1). We are a LGBTQ+ space who is welcoming to all good (2). We actively invest in communities to promote social change. We actively invest in our local arts and music scene to give space for artists. We actively pursue underserved communities in the use of our (3)." - courtesy El Rio.

"Founded in 1965 by William Ball, A.C.T. opened its first San Francisco season at the Geary Theater in 1967. In the 1970s, A.C.T. solidified its national and international reputation, winning a Tony Award for outstanding theater performance and (1) in 1979. During the past four decades, more than 320 A.C.T. productions have been performed to a combined audience of seven million people; today, A.C.T.'s performance, education, and (2) programs annually reach more than 250,000 people in the (3)." - courtesy ACT.

"For nearly 40 years, the San Francisco Gay Men's Chorus has served as an international standard bearer for a powerful mix of extraordinary musical excellence and mission-driven (1). Founded in 1978, SFGMC was the first choral organization to courageously proclaim its (2) in its name and is credited with helping start the LGBT choral movement that now spans the entire (3), galvanizing and changing the course of LGBT history." - courtesy SFGMC.

What does "best" mean, in an aesthetic sense? Certainly personal taste is subjective. But as with everything else, the more you know, the more you can enjoy. Hands down, the "best" place for an arts editor to live in SF is Hayes Valley. Lucky us, we live mere footfalls from the press doors of Davies Symphony Hall, and of the War Memorial Opera House, our favorite venue in all of Oz were it not for that martial name. There's enough bloody mayhem in the operas themselves.

Hayes Valley feels sort of like the Castro for young rich people, except even the Castro is that way now, too. We're neither young nor rich, but you might still find us chilling with a burger and fries at Chez Maman, or a nice mushroom pie at Patxi's. You will find us at Les Ros, where we've seen MTT arrive mit entourage after a SFS concert. Lots of choices there for a vegetarian. Or we'll queue up at the Grove. But right now, in this faux summer, we most like the ceviche mixto at the bar in Papito, washed down with a glass of good cold rose. Maybe soon we'll even get Pepi to Papito. Pshaw.