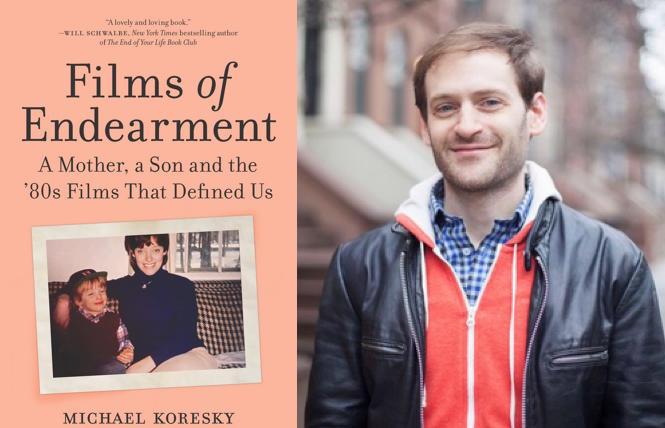 Movies not only reflect our desires but they can create them. You can see a movie at a certain period in your life and it can have a great impact on you. You remember where you saw it, with whom you saw it, and even why you wanted to see it. It has emblematic significance so that when you recall the movie, the memory of what was happening at that time in your life becomes real again.

This experience of how movies illuminate our lives is at the center of gay film critic Michael Koresky's innovative and captivating book, Films of Endearment: A Mother, a Son and the '80s Films That Defined Us (Hanover Square Press). It's a hybrid memoir, with film criticism and cultural history of what was occurring cinematically in the 1980s, skillfully intertwined into the events in his and his mother Leslie's lives.

Koresky is editorial director at New York City's Museum of the Moving Image and a freelance programmer at the Criterion Collection. For Koresky, movies "are a way of life, a totalizing force that informs our experiences and interactions. When you love movies so desperately, you see the world differently through them and because of them. And you return to them, because movies change as we change, grow as we grow, friends that reveal new facets with every viewing."

Koresky's passion for cinema started early in his childhood growing up in Chelmsford, Massachusetts during the 1980s when his young parents would watch VHS tapes at home, shared as a family, though both Koresky and Leslie agree the 1940s are the best era for films.

To discover more about their shared movie past, Koresky initiated a project where they would rewatch ten films Leslie first introduced to him as a child, one from every year of the 1980s which had special significance for both of them and all featuring strong women characters in leading roles.

During this process Koresky, happily married to his husband, turned 40, so it compels him to reexamine his personal and professional goals as he approaches mid-life with ruminations on age and mortality.

"Watching a film can pull you back to an experience from youth, but it can also beckon you into some- thing inherent or inexplicable inside yourself. What are the hidden parts of the self that a movie can lay bare?"

Koresky is interested in understanding how his own identity developed from what he saw on film and how it helped form the "gradual creation of a refracted queer consciousness," which as he notes "exists in interdependence and conflict with the long-held structures of the heteronormative world — necessarily keeping such a parent-child relationship at a remove."

But as Koresky notes, movies also allow us to connect with the lives of others. Cinema acts as a bridge between mother and son, and allowed them to reveal secret aspects of themselves.

The movies they chose may not be my or your favorite films of that decade, but Koresky aptly balances the emotional connection with the analytical/critical side, sharing background information about each movie, the actors, and similar films made that same year, which also could have been chosen or had personal relevance.

The first four chapters are the most emotionally intense. Nine to Five (1980) with Jane Fonda, Lily Tomlin, and Dolly Parton battling their chauvinist office boss, deals with Leslie's attempts to balance motherhood and work, as well as discussing mainstreaming feminism in the workplace, influencing her career choices, but also engendering a conversation on Hollywood's disdain for women directors.

Mommie Dearest (1981) while treated as the camp cult comedy it has become, also considers how her portrayal of child abuser Joan Crawford unfairly stigmatized actress Faye Dunaway's career. It also serves as a fulcrum for Leslie to talk about the traumatic psychological and physical abuse she endured from her mentally ill mother.

Terms of Endearment (1983) despite being a comedy for most of the movie —with Shirley MacLaine being courted by astronaut Jack Nicholson— also deals with the terminal illness of her daughter Debra Winger, which recalls memories of Koresky's father's early onset Alzheimers and Leslie's grief over his untimely 2011 death at age 65. Movies helped both of them cope with this loss.

Examining the Karen Black's empathetic trans character in Come Back to the Five and Dime, Jimmy Dean, Jimmy Dean (1982), reminds Koresky when on an impulse he called his mother from New York ready to come out to her, but before he could make his declaration, Leslie asked, "Michael, are you gay?," disclosing that both she and his father "knew before you did."

For Koresky, Baby Boom (1987) with high-profile consultant Diane Keaton suddenly becoming a mother at 40, brought up the issue of gay life being now so accepted by mainstream society to the point that he and his husband were constantly being asked if they were going to have children. Koresky is bothered by this assimilationist thinking and the movie gives him permission to be fine with not wanting to have kids.

Crossing Delancey (1988) with Amy Irving's romance with a Jewish butcher, raises the question of the role of Judaism in both their lives, about past memorable family seders, and their decision to meet for a joint Passover, the first in over a decade. This celebration would be sidelined by the pandemic, which also led to their final movie, The Fabulous Baker Boys, having to be shared together via Zoom.

The book also serves as an elegy for the 1980s as the decade for female actresses when Hollywood made these pictures with great roles for women to counter-program the testosterone-fueled violent excesses of Stallone and Schwarzenegger.

Of course, Hollywood doesn't make these middle-tiered movies anymore. Koresky draws parallels between the marginalized female experience and queer disregard, which is why the two are so often linked together.

One could quibble with the chosen movies, wishing there was an LGBTQ feature (The Color Purple is sheepish in its depiction of lesbian love) and one film featuring Meryl Streep, the decade's unrivaled star. But such lacks might inspire the reader to make up their own list of meaningful movies and inspire them to rewatch some of the films Koresky highlights.

Movies are more than entertainment, instilling in us a humane curiosity of the world, "encouraging shared values and mutual trust...challenging us to think past our presumptions about what is right and wrong, good and bad. They give us the chance to talk about things we may not be as open or willing to talk about as they apply to 'real life.'"

Films of Endearment is a delightful meditation on how films connect us as well as give us the opportunity to ruminate why certain films are so central to our lives, helping us appreciate what often cannot be formulated in words.

Films of Endearment: A Mother, a Son and the '80s Films That Defined Us by Michael Koresky. Hanover Square Press, $27.99. www.harpercollins.com

Author celebrates being gay in memoir to son
Sign up!