Larry Townsend: celebrating the man behind 'The Leatherman's Handbook' 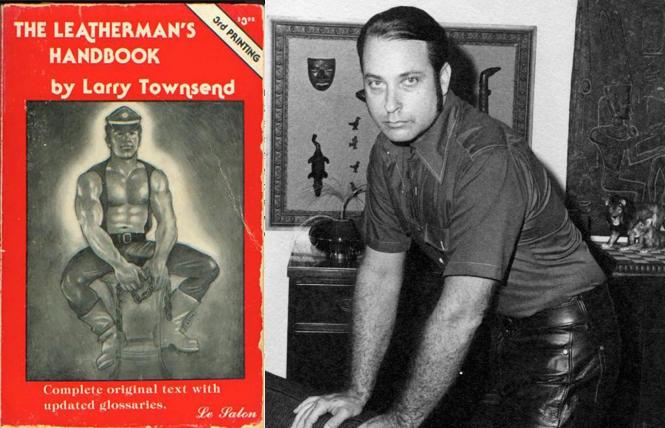 You might expect that a biography of a man who wrote an S&M handbook and came out in the mid-1950s would be difficult, sad and depressing. If you did, you would be wrong. The Life and Times of Larry Townsend: Saluting the 50th Anniversary of The Leatherman's Handbook, by Jack Fritscher, is anything but a sad story. If anything, Larry Townsend's story is a festive romp, and the word that best describes his life and work is masterful.

In telling Townsend's story, Fritscher attempts to correct the historical record and make certain Townsend's story is told, and that the leather history of Los Angeles is documented and included. Fritscher particularly mentions the lack of material on leather and S&M history in Lillian Faderman and Stuart Timmons' Gay L.A.: A History of Sexual Outlaws, Power Politics and Lipstick Lesbians:

"Faderman and Timmons' à la carte servings of 'L.A. History' dished up only passing mention of Drummer while the enormous gay-roots fact that it was a local magazine founded and filled in L.A. by local political activists, artists and writers including local superstars like Larry and Jeanne [Barney]." 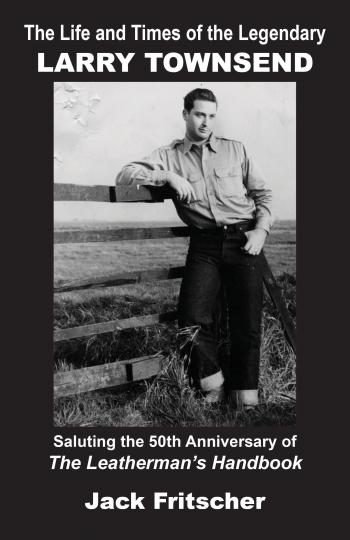 The story of Townsend's initiation into the world of leather and S&M is intrinsically linked to the underground L.A. history that Fritscher documents in his book.

"Having cruised in the closet of his car since his teen years," Fritscher writes, "he came out to his own formal satisfaction in 1955 at the primeval L.A. bar, Cinema, on Melrose Avenue which was likely the world's first leather bar, predating the Argos leather bar founded in Amsterdam in 1957, Chuck Renslow's Gold Coast leather bar in Chicago in 1958, and the Why Not and Tool box leather bars in San Francisco in 1962. The dive was perfect for him and the new gay motorcycle clubs, like the Satyrs founded in 1954, hosting mixers for sadists and masochists who were also military veterans."

It was a wild demi-monde that, because of its proximity to the film studios, had its share of Hollywood stars as well as military men, and Townsend crossed paths with some on a truly intimate level.

"He and Hollywood star Montgomery Clift, who sported a wicked leather jacket in A Place in the Sun, shared a lover," writes Fritscher. "That romantic triad ended when Clift, fresh off shooting Suddenly Last Summer, spirited the ham in their sandwich away to Cuba for the wild New Year's Eve before Fidel Castro marched his revolution into Havana on January 9, 1959." 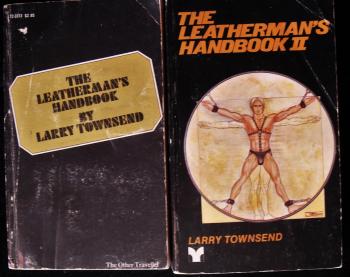 Early editions of 'The Leatherman's Handbook'

It's not merely Townsend's encounters with Hollywood stars or his forays into the first leather bar in the world that ultimately brought him to fame, even though this makes his story even more interesting.

Townsend was already writing gay pulp fiction like Kiss of Leather and The Gooser (later reprinted as The Gay Adventures of Captain Goose) for Greenleaf Classics in 1969, the year Stonewall changed everything (and three years before publication of The Leatherman's Handbook).

He was part of the gay pulp fiction world documented by Michael Bronski's Pulp Friction: Uncovering the Golden Age of Gay Male Pulps and Ian Young's Out in Paperback: A Visual History of Gay Pulps (it's worth noting that both Bronski and Young are mentioned in Fritscher's book and that he also notes that Bronski thanked Townsend for his help in gathering research for his book). 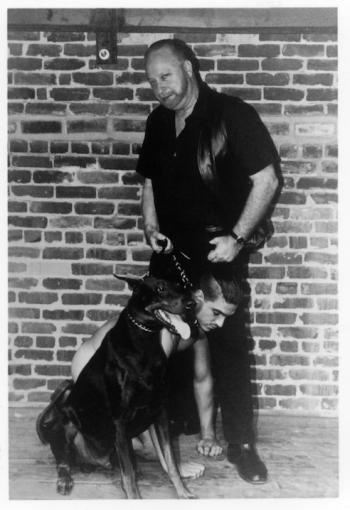 Larry Townsend with his Doberman 'Mueller' and a submissive pup in Los Angeles, 1997.

HELPing out
Aside from his value in supplementing leather fantasy with his pulps, Townsend was already an activist for sexual liberation well before Stonewall. Fritscher documents Townsend's work with HELP, the Homophile Effort for Legal Protection, which was founded in 1968 as documented in the book "to bail out and defend gays during and after the entrapment arrests by the Los Angeles Police Department."

Townsend was a founding editor of the HELP Inc. Newsletter, first published on Sept. 15, 1970. All of this is documented in Fritscher's book, along with photos of the first newsletter (the book supplements the text with over 50 pages of photos of everything from the Cycle Sluts cover of Drummer to Townsend's awards, his astrological chart and pictures of his King Tut curios).

The HELP Inc. Newsletter, however, has a particularly important place in leather history. As Fritscher notes, "In 1973, the HELP Newsletter was renamed H.E.L.P. Drummer and became a prototype of the glossy Drummer magazine founded in L.A. in 1975 by Larry's forever frenemy, John Embry, who in a smooth move deposed Larry as HELP president.

"The Advocate reported on April 25, 1973 that some members thought the election was rigged and that it was inappropriate that a non-profit legal-aid organization was being used to create Embry's commercial magazine." 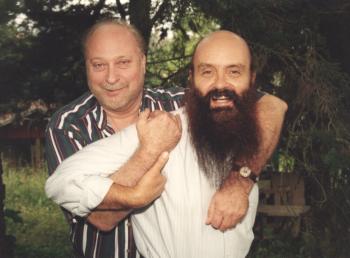 Internecine struggles of this sort are rife in the book, with conflicts between Townsend and Embry, as well as between Embry and Jeanne Barney, the founding Los Angeles editor-in-chief of Drummer. It makes for a fascinating read.

Ultimately, however, it is the publication of The Leatherman's Handbook, which the book is dedicated to, that is central here. Originally published in 1972, it was an instant classic and wildly popular, with fan mail sent addressed to "Master of Masters, Larry, Sir" among others.

The book was crowd-sourced before the word was invented, with Townsend gathering leathermen's oral histories by the distribution of a 'Leather Fact Sheet' to hundreds of men who informed his text.

Townsend used the same strategy when The Leatherman's Handbook II was published in 1984. As he was an apparent master at marketing as well, he reprinted the books multiple times with different covers to continue to attract readers.

Fritscher's homage to Townsend, who died in August 2008, makes for compelling reading, with authors like Didion, Foucault, Sacher-Masoch and De Sade all making appearances along with the crew of Drummer and all of the L.A. stars who crossed Townsend's path throughout his life.

Preview and purchase the book at www.jackfritscher.com