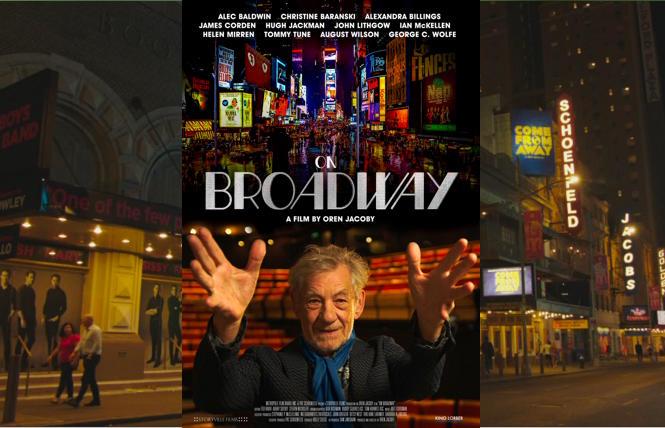 Oren Jacoby's documentary On Broadway covers a lot of ground. The film, which celebrates Broadway's unique ability to bounce back bigger than ever after facing adversity, is now available on DVD. The film is also streaming at Kino Now, the in-house /streaming service of Kino Lorber, the film's distributor. On Broadway can also be streamed at Apple TV (formerly iTunes) and Google Play.

But then, in the mid-'70s, a little musical called A Chorus Line opened at the Public Theater, a small not for profit theater company downtown. The show was based on interviews choreographer-director Michael Bennett had conducted with Broadway "gypsies," dancers who moved from show to show, rarely getting out of the chorus. The show was a smash and soon moved to Broadway, where it ran for many years, raking in millions in profits. Broadway had come back.

Show-stoppers
The film also illustrates the activist spirit of those in the Broadway community. As part of the effort to "clean up" Times Square, three historic theaters were torn down to make room for the Marriot Marquis, an upscale high rise hotel which now stands at 45th Street and Broadway.

Joe Papp, artistic director of the Public Theater, is shown addressing a crowd, calling for the three theaters to be saved. Broadway performers take to the streets, urging people to sign petitions in support of these theaters. The battle is lost, and all three theaters are torn down. Actor Christopher Reeve is seen watching the demolition of the buildings in tears.

On Broadway also recalls the peak years of the AIDS crisis, which decimated the theater community. Dancer-actor Tommy Tune recalls how AIDS devastated the theater community, cutting down scores of artists in their prime. An AIDS bereavement group is seen marching through the streets of the theater district. Newspaper clippings recall some of those who died, such as legendary choreographer Alvin Ailey and Michael Bennett.

Many Broadway luminaries are interviewed in the film, such as actress Helen Mirren, who speaks of how exciting she finds the district. "It used to be brothels and strip clubs, and I loved it," Mirren says.

'The Phantom of the Opera,' 'Hedwig and the Angry Inch' and 'Cats' are referenced in the film 'On Broadway'

The British invasion of Broadway is also examined, as lavish, big-budget shows like Cats, Miss Saigon, Les Misérables, and The Phantom of the Opera take the Great White Way by storm, bringing in huge crowds to the theaters and causing ticket prices to skyrocket.

Tickets for a stage adaptation of Charles Dickens' Nicholas Nickleby go for a whopping $100, with one happy patron saying that she'd gladly have paid twice that amount.

These days top ticket prices are approaching $1000. One interviewee points out that the industry needs to bring the cost of going to the theater under control before they price themselves out of the market.

Two shows that helped attract younger audiences to the theater are examined, Rent and the still-running Hamilton. Producers offered these shows at reduced ticket prices, and young people lined up. One young woman says that she particularly enjoyed Hamilton, a musical cast primarily with Black and Latino actors. "They look like me and my classmates," she says.

Enduring art
The producers of one show, a comedy/drama called The Nap, allowed the filmmakers access into their rehearsals and to attend their opening night. The Nap is a good example of how much the Broadway landscape has changed over the years, as trans actress Alexandra Billings speaks eloquently of how exciting it is for her, as a trans performer, to be playing a trans character.

On Broadway isn't the last word on the state of Broadway musicals, but it is a well-researched history of the ups and downs of the theater district's past 50 years. The film moves at a fast pace and serves as an education for anyone who might be interested in what it takes to put on a show.

The DVD includes a nine-minute short film called Give My Regards to Broadway, also directed by Jacoby. This film deals with how Broadway was affected by the COVID-19 pandemic. Highlights include actor/singer Brian Stokes Mitchell, himself a coronavirus survivor, standing in the window of his apartment belting out "The Impossible Dream," a show-stopping number from the classic musical Man of La Mancha as a way of saying thank you to the city's essential workers.

Also seen is a Zoom performance of the legendary Stephen Sondheim song, "The Ladies Who Lunch" from Company, performed by Christine Baranski, Meryl Streep and Audra McDonald, from a recent Actors Fund online benefit. Give my Regards is dedicated to the memories of playwright Terrence McNally and performer Nick Cordero, both of whom were lost to the pandemic.