Live 'Stream'- 'Gently Down the Stream' at NCTC 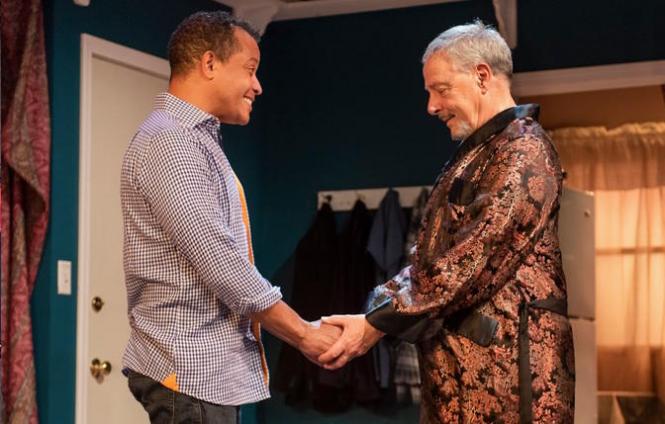 Daniel Redmond and Donald Currie in 'Gently Down The Stream'  (Source:Lois Tema)

"Have you done Google yet?" 28-year-old Londoner Rufus excitedly asks Beau, the 62-year-old American expat with whom he's just spent the night in the opening scene of playwright Martin Sherman's Gently Down The Stream, now at the New Conservatory Theatre Center through January 9. "It's a new thing, a search engine... My mind's a search engine...Google should install an electric sensor to my brain."

If you'd Googled "gay history" in 2001, the year in which this dialogue is set, your search results might well have included references to Larry Kramer, the AIDS crisis, James Baldwin, Gore Vidal, Tennessee Williams, and Truman Capote. And if you'd done the same search 13 years later, when the action of Gently Down The Stream trickles to its conclusion, you'd note the growing prominence of legalized same-sex marriage and adoption. All of which are touched upon —some with a light namedrop, others with reverberating poignancy— in this simultaneous valedictory for the gay past and benediction of queer generations to come.

In Beau, a world-weary cocktail pianist who begins the play having long abandoned hope for new romance in his life, Sherman gives us a natural raconteur with the serendipitous social life of a Forest Gump or Leonard Zelig.

As played with effortless charm and impressive stamina by Donald Currie, who is on stage for the entirety of the show's 140 intermission-less minutes, he's wonderful company. It's Beau, not Rufus (gamely played by Daniel Redmond despite a script that does him no favors), who's the googlier Guy here; a gay time capsule in dapper human form, not nearly as reluctant as he initially seems to share his life's stories with an eager audience.

If theatre-goers are that audience, Rufus' primary function is to serve as our onstage surrogate, eliciting tales of his hookup-turned-partner's past adventures and heartbreaks over the course of what evolves into a relationship of more than a decade. With an initially charming puppy dog energy, he yips and begs for more of Beau's stories. And after some faux-modest whaddya-want-with-an-old-guy hems and haws, Beau is grateful and happy to throw him a bone.

As it turns out, Rufus is the audience's offstage surrogate as well, since for much of the play we see only Beau in his cozy flat (The lovely set, with its peek of a utilitarian kitchen behind a warmly decorated parlor, is by Kuo-Hao Lo). He spins autobiographical yarns to an unseen Rufus, who we're told is videotaping the stories, but not given an explanation as to why. 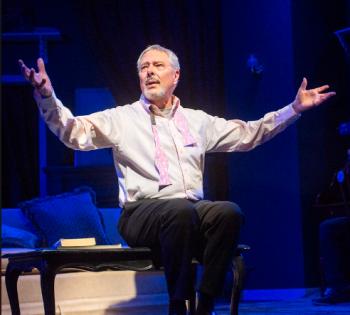 Donald Currie in 'Gently Down The Stream'  (Source:Lois Tema)

And that 'Why?' proves an itchy question. Sherman has said that he wanted to create a sort of companion piece to his play Rose, a portrait of 20th-century Jewish life as seen through the eyes of a single woman, in which gay life was played out through the eyes of a single man. But Rose was a monologue (most famously performed by Olympia Dukakis) and Sherman was not interested in repeated the form. As it turns out, that's the form that would have best suited the stronger material here.

The weaker material departs from Beau's reminiscences in an effort to give the Rufus character a reason for being. But it never feels like Sherman's heart is in it. When Rufus first refers to the electrical buzz of his brain, Sherman is foreshadowing the revelation that the young man is bipolar.

But save for one clinically inaccurate paranoid meltdown scene, the challenges of living with and loving someone with mental illness —potentially a play in and of itself— are almost entirely ignored. Similarly, Rufus' career as a lawyer and troubled relationship with his family get briefly shoehorned into the dialogue on occasion, but are never fleshed out. Next to Beau, this Rufus seems as irrelevant as that other one does next to Chaka Khan.

In a rushed final few scenes, Sherman tries to re-center the marginalized relationship story, but its too little, too late. Harry, a new love interest for Rufus, comes on the scene (despite our never having sensed any real strain between the main characters. Sal Mattos turns in a performance as warm and well-etched as it is brief.

Still, much credit is due to Currie, director Arturo Catricala and yes, to Martin Sherman whose own spiritual generosity and emotional experiences are surely reflected in his central storyteller. Despite its awkward structure, the play is rich in heart and history. Gently Down The Stream succeeds in spite of itself.

NCTC celebrates with 'Encore' : singing Happy Birthday with 40 years of music
Sign up!