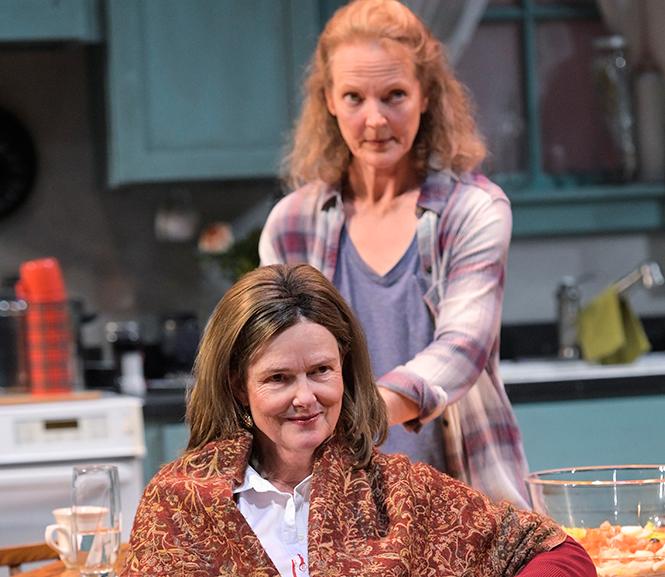 The West Coast premiere of playwright Lucy Kirkwood's "The Children," now at the Aurora Theater in Berkeley, is dreadful. It's skillful and thoughtful as well, but those qualities are largely swept aside by a relentless sense of dread. The eco-disaster drama opens with a blackout and seat-shaking sonic boom, establishing a foreboding tone that continues through its last scene, when all three of its characters essentially resign themselves to imminent death.

The action takes place in a bedraggled seaside cottage on an unnamed island off the coast of England. The house is a loaner where retired nuclear engineers Robin (James Carpenter) and Hazel (Julie Eccles) have retreated after a recent tsunami and subsequent power plant disaster have left their own home in a dangerously irradiated "exclusion zone." While the couple's grown daughter and her children have moved far away, their own refuge, with an erratic water supply and inconsistent electricity, is just 10 miles outside the government-declared disaster area. Every morning James crosses the borderline as if heading to work. Hazel thinks he's keeping their cows fed. He's actually burying the animals' cancer-ridden carcasses.

High-strung Hazel busies herself with yoga routines and preparing the healthiest meals she can come up with given a contaminated food supply. James, when he's home, slips between states of irritation and disconsolate silence. Into this domestic wasteland arrives Rose (Anne Darragh), a long-ago professional colleague of the pair who left England for the U.S. more than three decades ago. In her mind, she's returning to the scene of a crime.

While Rose frames her plan in terms of environmental legacy, there are more personal motives at stake, too. She's never married or had children, and her early flurry of questions about Hazel and Robin's grown kids suggest a gnawing curiosity about paths she didn't take in life. Whatever sense of emptiness she may have felt before the disaster seems compounded by the fact that her professional life now feels invalidated. Perhaps marching into radioactive martyrdom will help her counteract her sad self-regard on both fronts. Her impulse to drag her one-time colleagues along with her, leveraging their guilt while minimizing the value of their family ties, feels vindictive.

That impression is deepened by the eventual revelation that Rose had a romance with Robin long ago, before he married Hazel. Their sense of impending death stirs up long cooling embers, and there are a few moments of rekindled adolescent impulses as the play winds down. But neither the distant love triangle's tinkle nor the apparent discord in Robin and Hazel's timeworn relationship can be heard very well beneath the roar of mortality that overwhelms the evening.

While appropriate in its monotony, Barbara Damashek's direction often feels like a long slog to the gallows. It's not helped by a script in which none of the characters is likable. Darragh successfully embraces Rose's self-regard in a vivid but unpleasant portrayal, and Eccles is spot-on with Hazel's brittle excitability. Carpenter, one of the Bay Area's finest actors, who excels at volcanic emotion, feels wasted here as the wan, receding Robin, his skin sallow and soul drained by ambient radiation.

During the somewhat arduous experience of "The Children," one may find oneself hoping to be exposed to some strong argument about environmentalism from Kirkwood. But strangely, her script ends up elevating the lives of adults who often behave like children above their profound impact on Mother Earth.