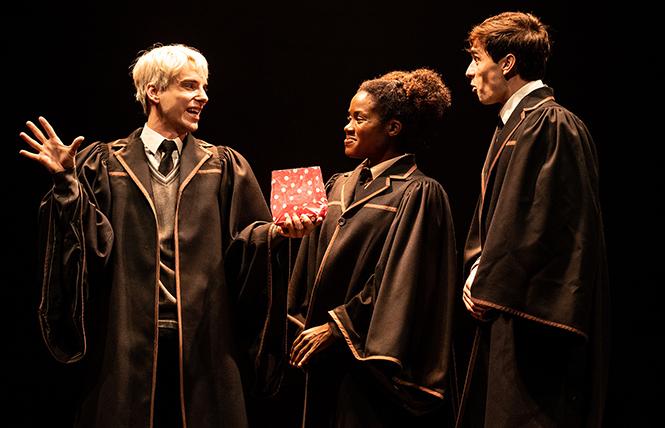 Chapter Yet Another: In which Death Eaters meet Day Eaters. The former are dark-hearted followers of Lord Voldemort, uber-villain of the Wizarding World. The latter are the four acts of "Harry Potter and the Cursed Child," now playing an open-ended run at the Curran Theater in its first North American production since opening on Broadway last year. On most Wednesdays, Saturdays and Sundays, they're played in two sittings separated by a dinner break, which essentially demands committing 8½ hours to this latest expansion of the Potterverse. That's comparable in time and ticket price to a day at Disneyland. On Thursdays and Fridays, you can see the show split over two nights, but that's sub-optimal; it's been built for binge-watching.

Handsomely mounted and certainly diverting, "Cursed Child" is a long walk on a thin line between imagination and machination. Ardent fans of J.K. Rowling's book series (and the movies it inspired) will have no complaints about the deeply thought-through script (by Jack Thorne, based on a plot co-created with Rowling and director John Tiffany), which dovetails seamlessly with the elaborate and complex details of its forebears, even working in a few gasp-inducing Easter Eggs for Loyalists that don't confuse matters for relative newbies. And the production values, for the most part, are superb. Christine Jones' gliding set-pieces and the ever-shifting gloom of Neil Austin's rich, atmospheric lighting carve out dozens of distinctive locations within the space of the Curran stage; and thanks to Katrina Lindsay's sweeping, caped costumes and Stephen Hoggett's minutely graceful choreography, the ensemble of over two dozen moves with fluid Swiss-watch precision. There are terrific individual performances, too, most notably Jon Steiger as a lovably uneasy Scorpius Malfoy, and David Abeles, whose prankster, grown-up Ron Weasley feels genetically identical to the child in the books.

Despite all this well-oiled and genuinely admirable craftsmanship, there's a deathly hollow at the center of it all, an overarching sense that the production is not a natural outgrowth of the landmark book series that, among other positive effects, inspired millions of kids and adults to discover or rediscover the pleasures of leisure-reading. Rather, it feels like a forced bloom teased from the seed of the final book's epilogue a dozen years after it was published. Rowling's legions of fans have no good reason to refute her word that the original books were envisioned as an epic, multi-volume series, or to begrudge her the fortune and film adaptations with which her creativity was rewarded. Once upon a time, J.K. Rowling felt artistically compelled to build a world. "Harry Potter and the Cursed Child" builds on a brand.

In the final passages of the final Potter novel, Rowling offers a lovely closure that echoes of her series' beginnings: After dozens of episodic adventures full of setbacks and reversals, the book jumps forward in time to show us an adult Harry Potter sending his son, Albus, off to begin his own time at Hogwarts; it also sends readers who have grown up with Harry Potter off to have their own adventures. This is a grand feat of literary magic: a simultaneous fusion and separation of the fantasy world and real life.

More of an excess than a necessity, "Cursed Child" blows off that graceful closure to dive back into the giddy thrill of episodic adventures and reassert familiar themes of love, death, friendship and filial angst. It's entertaining, but extraneous; polished fan-fiction by the most talented fans imaginable. There's magic to be found within the world of Harry Potter, and even within this show. But like scarfing down one more tempting handful of Bertie Bott's Beans after being sated, a long day with the "Cursed Child" may leave you feeling a bit greedy and a bit disenchanted.