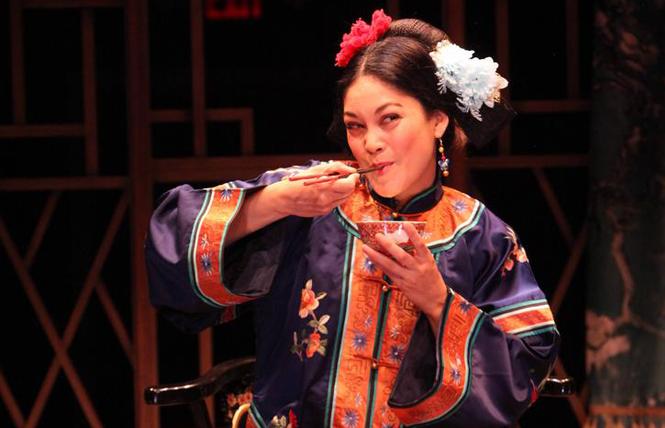 Afong Moy was the first Chinese woman to ever set foot in the United States. She arrived as chattel, a 14-year-old girl leased out for a tidy sum by her already well-to-do father. The Carne brothers, two American importers of Asian home furnishings, used Afong as a cross between a billboard and a zoo animal. They charged curious New Yorkers to observe the costumed girl as she demonstrated chopsticks and tea service in a vitrine-like diorama decorated with fans, vases, folding screens and other ersatz Orientalia that the brothers sold as fashionably exotic décor.

The few recorded details of Afong's true story serve as inspiration for playwright Lloyd Suh's "The Chinese Lady," at the Magic Theater through Nov. 3, which begins as an insightful dramatization of her early days in America, then billows forward in an effort to encompass the grand sweep of history.

This is an admirably overambitious piece, and while Suh and director Mina Morita get a bit blurry trying to hybridize history play, social justice argument and meta-narrative experiment in a scant, intermissionless 90 minutes, Rinabeth Apostol's sly, remarkably focused performance as Afong goes a long way to keep the proceedings from floating into abstraction.

Even when she delivers a line like "My entire life is a performance. These words that you hear are not my own. These clothes that I wear are not my own. This body that I occupy is not my own. I am intended to be representative of the Chinese Lady," Apostol refuses to let her character disappear into stereotype, theory or symbolism. With a full arsenal of precise side-eye glances, knowing smiles, and gently ironic inflections, Apostol makes us understand Afong as a very specific and very cheeky teen who gradually ages into disillusionment but never fully relinquishes her essential optimism.

Will Dao has less to work with in the play's only other role, Atung, an attendant and English interpreter, but he also manages to create a singular, nuanced individual within a play that's fundamentally driven by ideas more than by characters. Through subtle shifts in posture, gait, and facial expression, he conveys simultaneous urges to protect and ridicule Afong when, in youthful naivete, she perceives her captivity and self-caricature as an opportunity to promote "greater understanding and goodwill between all of the peoples of the world!"

Dao is a tour de force in the show's pivotal scene, Atung and Afong's reenactment of their meeting with Andrew Jackson in the White House. Dao plays not only Atung, but also Atung-playing-the drawling-Southern-president. Translating for both Afong and Jackson, Atung effectively rewrites their dialogue, trying to deny Jackson her fawning admiration while shielding Afong from the president's demeaning objectification.

Until this point halfway through the play, time moves slowly and steadily. As Afong ages from 14 to 17, she gradually begins to recognize her exploitation. Suh's witty dialogue is highly stylized, but there's a sense of organic character development. Then suddenly, the evening shifts gear, hurtling 15 times faster through 65 years of the Gold Rush and Transcontinental Railway Construction and Sinophobia and Chinese Exclusion Act. Afong catalogs these infamous milestones in a flood of verbiage that carries her through age 82 and into the afterlife. But beyond a sense of solidarity with other Chinese immigrants, she seems disconnected from these events, which she briefly describes but doesn't seem to have participated in. After chronicling three years in rich, distinctive detail, playwright Suh gives us very little understanding of anything that went on in the subsequent decades of Afong's life. What started as a richly drawn character is gradually reduced to a representative lecturer: "The Chinese-American Studies Professor."