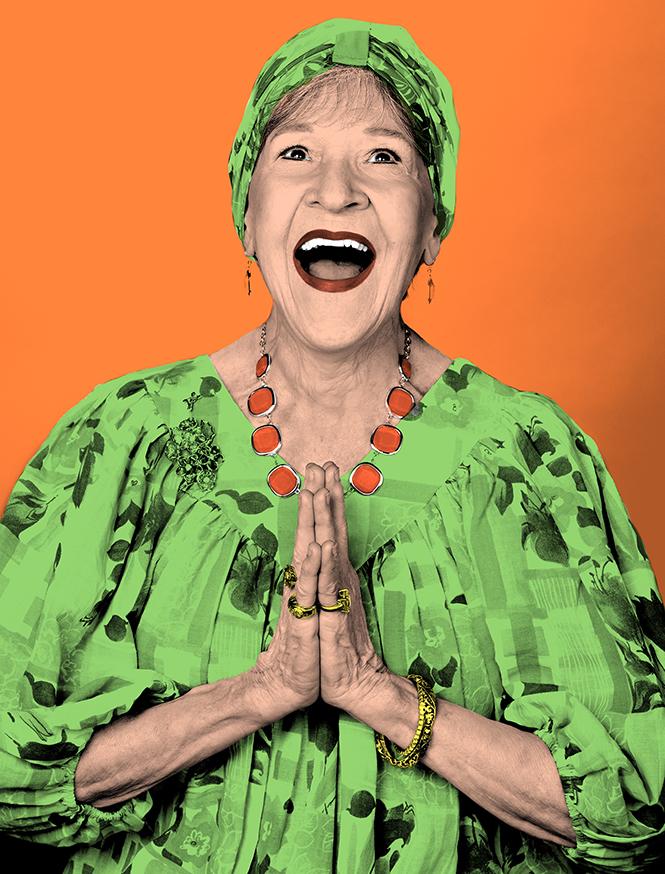 Ditty (Christine Macomber) is an overbearing stage mother who will do whatever it takes to get her star-studded reunion performance. Photo: Lois Tema

Aging gospel singer-songwriter Ditty Blaylock, who ushered her now-grown daughters to childhood musical stardom as "little superstars for Jesus," swans around her Kentucky McMansion brandishing a revolver. When she's feeling particularly annoyed, she spins the cylinder, holds the gun to her head and pulls the trigger. The pistol usually doesn't hold any bullets, but from the opening scene of "This Side of Crazy," written and directed by Del Shores ("Sordid Lives") and now making its world premiere at the New Conservatory Theatre Company, it's loaded with portent.

Shores may have checked in with Chekhov in regard to dramatic devices, but he hasn't followed any guidance on psychological subtlety. "I'm unhappy," he has Ditty declare, in case her feints at suicide haven't registered with the audience. "I'm dreadfully unhappy."

Such diva-like declamation has long tickled fans of Shores' frothy earlier work, which largely leans on southern-fried cornpone and camp. That's what loyal audiences may expect from this show, which incorporates attempted murder, sororal betrayal, sex with a comatose body, and faith-based advice vlogging.

But in "This Side of Crazy," Shores' tone teeters awkwardly between comedy and tragedy. Shores may be earnestly aiming to evoke the bittersweet laughter and tears of real-life mother-daughter relationships, but it feels like he's abruptly changing channels between "Momma's Family" and Tennessee Williams. The moods here don't shift, they collide. Just when the audience is feeling affected by somber soul-baring, they get Whoopee cushion-whiplashed with hoary old jokes ("Why buy the cow if you can get the milk for free?," "Don't look at me in that tone of voice.")

As the three adult Blaylock daughters, actors Cheryl Smith, Amy Meyers and Alison Whismore turn in fine-grained, realistic performances. Their intense if sometimes begrudging sisterly bond remains palpable every time they return to their groove after delivering a gratuitous laugh-line. Smith's Rachel, the eldest, turns a guilty conscience into slavish devotion to her mother; Meyers' bright, upbeat Bethany, a lesbian, has learned to navigate family life as a diplomat and bridge-builder; and Whismore's haunting, haunted Abigail, dimmed by 25 years of medication and institutionalization, is a hypnotic presence on stage, whether exploding into rage or silently stretching her lanky frame on a back-porch chair, drawing deep on a cigarette as she contemplates the injustices of family life.

Wacky, depressed Ditty is played like a cross between Bea Arthur and puppet-hussy Madame by the eminently entertaining Christine Macomber. But she suffers on account of the script, which gives us very little basis for understanding her character. There are intimations that she was the Mama Rose of the Christian music world, manipulating her daughters into a life they didn't want, but no specific incidents are described. Her suicidal impulses become less and less comprehensible as she comes closer to pulling the trigger toward the play's end.

If some of the stage time dedicated to clowning and broad laugh-lines irrelevant to the plot were instead spent on probing the psyche of the play's central matriarch, the work might have a more even tone and satisfying outcome. Given that this is a first production, Shores has an opportunity to make helpful alterations. For the moment, "This Side of Crazy" is crazily lopsided.