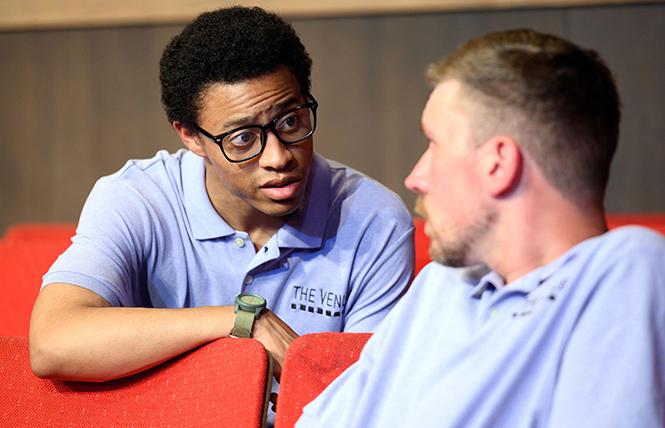 Avery, one of the three movie-theater workers at the heart of "The Flick," has trouble explaining why he so strongly objects to the impending replacement of the decrepit single-screen cinema's 35mm projector with one of today's more common digital systems. Rather than a relentless, hermetic stream of pixels, Avery enthuses, traditional film projection presents thousands of discrete images separated by "brief periods of black."

While Avery can't quite articulate the value of this difference, his stammering effort reveals playwright Annie Baker's compassionate synechdochical poetry. Those dark interstices between film frames are mimicked by the awkward gaps in Avery's speech; these are places where the human mind is most vividly at work, striving to make meaning.

The action of "The Flick," on stage at Shotgun Players through Sept. 22, largely takes place in a similar interstitial realm. In the minutes-long breaks between feature films, Avery (Justin Howard) and co-worker Sam (Chris Ginesi) sweep up scattered popcorn and mop spilled pop while projectionist Rose (Ari Rampy) changes reels and keeps Sam reeling in hopeless infatuation. These lonely souls spend the bulk of their waking hours in stifling darkness, able to engage with each other only during these fleeting intervals. In only the tiny titrated doses that their environment allows, the trio awkwardly share family tragedies, simmering resentments around class and race, eclectic enthusiasms, and a faint but hopeful trace of friendship. Quietly, provocatively, Baker challenges us to recognize how difficult it is to forge empathic human connections and have meaningful discussions with colleagues in such a workplace.

But for all its slow-played cinema verité surface, "The Flick" offers more than an ache-evoking depiction of these specific dead-end jobs. Baker's genius is the way she slyly weaves metaphor and metonym into a play that can easily be mistaken as entirely straightforward. When the characters in "The Flick" begin to feel uncomfortably intimate with each other, they default to playing Six Degrees of Kevin Bacon; they use movies as a way to put distance between themselves. Everyone who buys a ticket to "The Flick" has grown up in a culture where the quirky, messy, unpredictable stories of our human-scaled lives have been demeaningly pushed, flicked away from the center, overpowered by corporate-driven, Hollywood-style mythology. When was the last time your life really felt like a rom-com, an apocalyptic disaster, or an endless hail of gunfire? Baker urges us to keep our minds on the interstices between frames of fantasy, the life squeezing up through cracks in the pavement, the priority of meaning over marvel.

Past productions of "The Flick" have been criticized by some audience members for moving too slowly and feeling too long. The running time is three hours, plus a 15-minute intermission. But this, too, is part of Baker's design; she coaxes us to contemplate why we find it so much easier to escape reality than to engage with it, or even the simulacrum of it provided by live theater. "The Flick" is two minutes shorter than "Avengers: Endgame." You can take it, and you should.