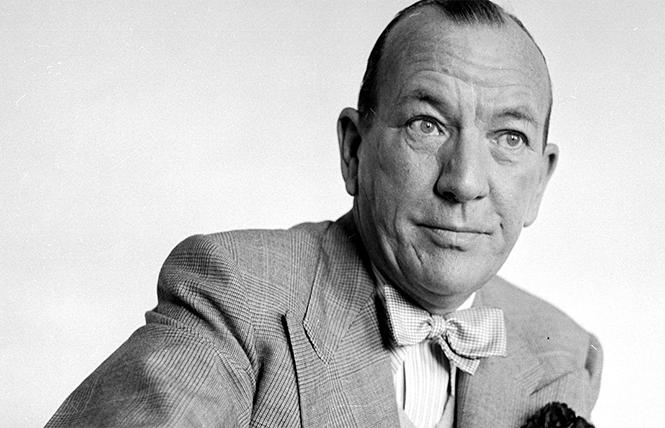 Prominent stage, movie, and television actor. Dramatist. Novelist. Lyricist. Composer. Singer. Cabaret star. Theatre and film director. Celebrated raconteur. Insightful diarist. Noel Coward (1899-1973) was all those things. His versatility and success in so many fields were unmatched during his lifetime and have been unequaled since. Although he never came out publicly, privately Coward was open about his homosexuality. For nearly 30 years, he lived with actor Graham Payn, who appeared in many of his plays, and who, with Sheridan Morley, edited his diaries. He maintained a close relationship with Prince George, Duke of Kent (1902-42), younger brother of King Edward VIII and King George VI, which he claimed was platonic, although he did tell one historian that they once had a "dalliance."

Born in a London suburb to a mother who ran a dance academy, he was pushed into performing as a child. At 11, he was acting on stage. By age 20, he'd appeared in several West End productions. Stardom came with his 1924 play "The Vortex," in which he portrayed the cocaine-addicted son of a "nymphomaniac" woman. The sensationalist depiction of shocking behavior among the upper classes assured its success in London and New York. He became a matinee idol. In 1925, his "Fallen Angels," "Hay Fever," and "On with the Dance" joined "The Vortex" on West End stages. "Hay Fever," about a self-centered upper-class family and their weekend houseguests, is considered one of Coward's masterpieces, is frequently revived, and has been favorably compared with Oscar Wilde's "The Importance of Being Ernest" for its dazzling, character-based comedy.

He cranked out hit after hit, although in 1927 he had a failure with "Sirocco," a musical starring gay singer Ivor Novello. Still, by 1929 he was among the word's highest-paid writers. That year, his operetta "Bitter Sweet" was a triumph. Even more successful was 1930's "Private Lives," about former spouses now remarried, another of his comic masterpieces. The 1931 movie was a smash. Despite its misogyny, it's frequently revived. He starred in the London and New York productions, with Laurence Olivier appearing as the second lead. Equally successful was "Cavalcade" (1931), which looked at several generations of two English families. The 1933 film version won the Best Picture Oscar.

"Design for Living" (1932) is a dazzling, witty, and daring look at a menage a trois, and strongly suggests both leading men are bisexual. Coward, Alfred Lunt, and Lynne Fontanne starred in the New York production; it was too risque for London. Ben Hecht adapted it for the movies, reportedly leaving only one word from the original script. Still, the sexual dynamics are hinted at. "Present Laughter," written in 1939 but not performed until 1942, is a superb comedy about a self-centered actor. It, too, is frequently revived. In 1941 he wrote and starred in what may be his finest comedy, "Blithe Spirit," about a widower who remarries and holds a seance that evokes the ghost of his first wife. Dark complications follow. It has often been revived.

"In Which We Serve" (1942) was a film about the crew of a WWII British destroyer. Coward wrote the screenplay, co-directed the movie with David Lean, played the courageous captain, and composed the score. It was nominated for Best Picture and Best Screenplay Oscars, and Coward received an honorary award at the 1943 ceremony.

During WWII, he worked for British Intelligence and entertained the troops. "Brief Encounter" (1945), a film about would-be lovers who cannot abandon their spouses, made audiences weep. His postwar plays were not as popular, although a 1948 revival of "Private Lives" starring Tallulah Bankhead was a critical and commercial triumph. In 1955 he starred in and directed an acclaimed live-TV version of "Blithe Spirit" with Claudette Colbert and Lauren Bacall.

During the 1950s, his cabaret act earned him accolades in London's Café de Paris and in Las Vegas. He performed many of his own songs, including "If Love Were All," "I've Been to a Marvelous Party" and "Mad Dogs and Englishmen." His "Mad About the Boy" has been recorded by many singers. He appeared frequently on television, a sought-after guest on talk shows. Despite his middle-class origins, he had become the embodiment of an English aristocrat: polished, witty, slightly effete, cultured, perhaps discreetly gay.

In his best plays, serious issues peek through funny dialogue and clever plots. Underneath the remarkable wit, behind the elegant pose, was a hardworking professional, a man known for his generosity to colleagues who were having difficult times. His diaries reveal a clear-eyed assessment of the "glamorous" world in which he thrived. He was close friends with a wide range of people, among them frequent co-star Gertrude Lawrence; Olivier; John Gielgud; Marlene Dietrich, although he deplored her emotional hysteria; Joan Crawford; Taylor; Vivien Leigh, whom he scolded about smoking. Her 1967 death at 54 from tuberculosis upset him so much that he could not attend her memorial service. He left an unsurpassed professional and personal legacy.