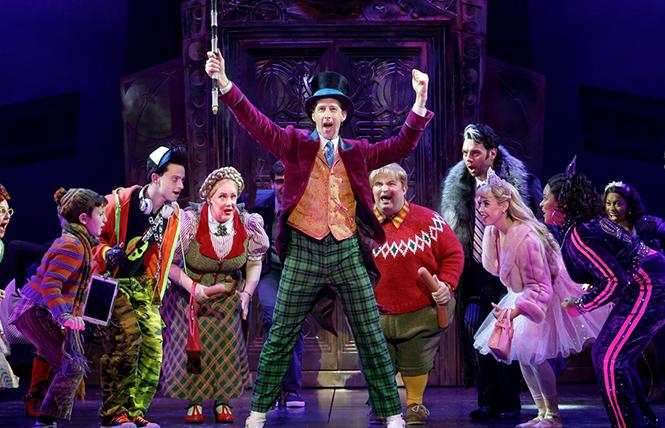 Noah Weisberg as Willy Wonka (center) in "Charlie and the Chocolate Factory" at the Golden Gate Theatre. Photo: SHN

In the national touring production of "Charlie and the Chocolate Factory" now playing at the Golden Gate Theatre, there isn't anything the Candy Man can do to compensate for the Vegetable Woman.

If you're escorting children to this latest iteration of Roald Dahl's 1964 children's book, be prepared to connect the dots between Mrs. Green — a bedraggled woman who pushes her shopping cart across the stage, shouting and selling putrid produce — and the denizens of the Tenderloin whom you'll surely encounter on the sidewalk as you leave the theater. That Mrs. Green is played by a black man in a wig (Clyde Voce) has the potential to further complicate your evening.

This character, who sells young Charlie Bucket "antique" cabbage for his family's dinner, is not part of the original rogues gallery created by Dahl for this story. She's only been added for laughs. You know, the sort of heinous, hearty, "look at the crazy skid-row tranny" laughter that can spread from affluent theatergoing adults to their children, infectiously.

Once upon a time, in addition to being a candyland fantasy, "Charlie and the Chocolate Factory" was a clandestine children's primer on bad parenting and its aftermath; a chocolate-covered pox on the overprivileged, the gluttonous, the tantrum-prone and the showbiz-addicted. This go-round, the morals of the story seem turned inside-out. The show is an empty indulgence, a treat for elites festooned with ill-conceived jokes, inconsistent musical styles and insincere emotion.

Roald Dahl never pandered to young audiences, but David Grieg's book for the musical is larded with zingers about the likes of pigeon poop and diarrhea. For adult guardians, there are unguarded gags about psychopharmaceutical-assisted child-rearing and the Dalai Lama spitting on the Pope (not kidding).

"The Candy Man," "I've Got a Golden Ticket," "The Oompa Loompa Song" and "Pure Imagination," songs originally written by Leslie Bricusse and Anthony Newley for the beloved 1971 film version of this story, are included here. They're all nostalgic button-pushers for older viewers, but the last, as sung with dreamy intimacy by Noah Weisberg as Willy Wonka, is beautiful; an underappreciated classic, happily rescued.

Of the dozen-plus new numbers that Marc Shaiman and Scott Wittman have written for the stage, only two, "The View from Here" and "It Must Be Believed to Be Seen," effectively dovetail with the film songs' wistful timelessness. Others toss about in a crazy genre salad: "Queen of Pop," a rap/doo-wop/R&B pastiche sung by gum-chewing Violet Beauregard, sounds like an outtake from the composers' "Hairspray"; "When Willy Met Oompa" feels like a Copacabana novelty tune; and "Vidiots" is really bad 1980s synth-pop.

Amidst the overall lack of focus and sensitivity, a few choice morsels do materialize: lanky, curly-haired Weisberg turns in a sharp performance as Wonka, his twitchy, bittersweet mien conveying the dark streak of Dahl's original. Reminiscent of the young Martin Short, he's a fine physical comedian, as well, whose legs and torso sometimes seem to zigzag in opposite directions. The Oompa Loompas are also a kick: Small puppet bodies are suspended from the exposed faces of otherwise black-clad ensemble members who use rods to manipulate the miniature limbs (the effect was created by MacArthur-winning puppeteer Basil Twist). There's also a terrifically theatrical interpretation of death by squirrel.

Still, the vast majority of the show feels like a rote walkthrough of audience expectations for a famous franchise: Charlie's grandparents in a bed-for-four? Check! Augustus Gloop dunked in a chocolate river? Check! Violet Beauregard inflated into a giant blueberry? Check! (Though what should be one of the show's visual highlights is handled remarkably drably.) Great Glass Elevator busting through the factory ceiling? Check! (Well, assuming you're familiar with the story. Otherwise you might not pick up on what's happening in that scene.)

Your memories and your children deserve better.