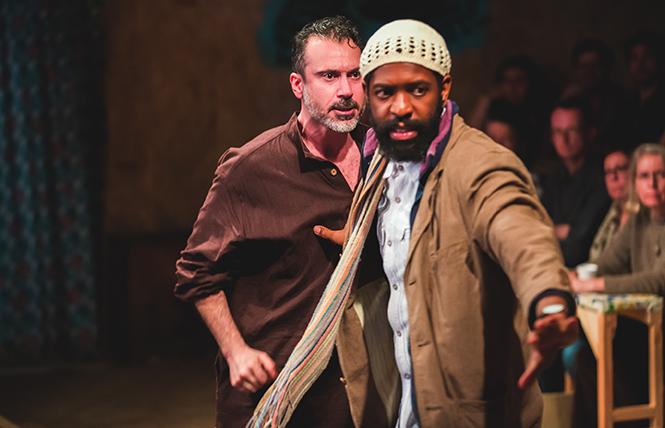 You will find yourself in a crowded, unfamiliar place, a Babel of languages shouted all around you. Strangers will push past, elbowing you aside, and others may try to pick your pockets. Countercurrents of music and dust and impassioned oratory will fill the air, spinning your head, making you uncertain what to listen to, where to look, how to act.

"The Jungle," now at the Curran theater, is a flight simulator: It places you amidst the mass migration of thousands of refugees fleeing poverty, misogyny, terrorism and religious fanaticism. Performers and audience members share space in set designer Miriam Buether's crowded international shantytown.

Playwrights Joe Murphy and Joe Robertson have specifically set their script in the Calais, France encampment where thousands of UK-asylum-seekers from the Middle East and Africa created a makeshift city in 2015-16. But their characters' stories will deepen your understanding of refugees everywhere, of the harrowing physical and emotional conditions they endure in seeking better lives for themselves and their children.

Cannily directed by Stephen Daldry and Justin Martin, "The Jungle" theatrically compresses the experience of its subjects for the audience, forcing us to feel the jarring chaos of displacement before allowing us to connect with individual characters, listen to their stories and reengage our empathy. We are dehumanized then rehumanized, but left rattled and raw.

The refugees' stories, based on accounts the playwrights heard firsthand while volunteering in the Calais camp, are heartbreaking. Salar (Ben Turner), the Afghan whose ad hoc restaurant becomes the camp's de facto town hall, recalls the repeated destruction of his own hometown by the Taliban. Eritrean Helene (Nahel Tzegai) speaks of traveling by foot across thousands of miles of barren desert, scorching by day, freezing by night. Okot (John Pfumojena), a haunted-eyed Sudanese teenager, tells of witnessing his mother's rape, then being set adrift at sea by human smugglers, literally piled with 700 others in a boat built for a third as many.

The intimate sharing of these narratives alone would make "The Jungle" a powerful experience, but the playwrights complicate matters considerably through another group of characters: a crew of British aid workers whose mix of political outrage and utopian idealism ingeniously plays with theatergoers' sense of noble self-regard.

Ginger-haired, wire-rimmed 18-year-old Sam (Tommy Letts) enters the camp shooting video from a selfie-stick, documenting the scene like the Mark Cohen character in some dire, global version of "Rent." In a moment, it reframes that show, adored by many as a serious take on major social issues, as a callow first-world-problem play.

When English tutor Beth (Rachel Redford) delivers a complicated speech about whether privileged NGO workers are earnest devotees to their causes or indulging in "virtue signaling," it makes you wonder the same about privileged "Jungle"-goers.

"The Jungle"'s unusual staging and production design have been touted as providing a unique, immersive experience. In fact, it shocks us into recognizing our pre-existing immersion. There's a devastating refugee story at play on the world stage. It's a choice to cast oneself as a spectator or to take on a more significant role.